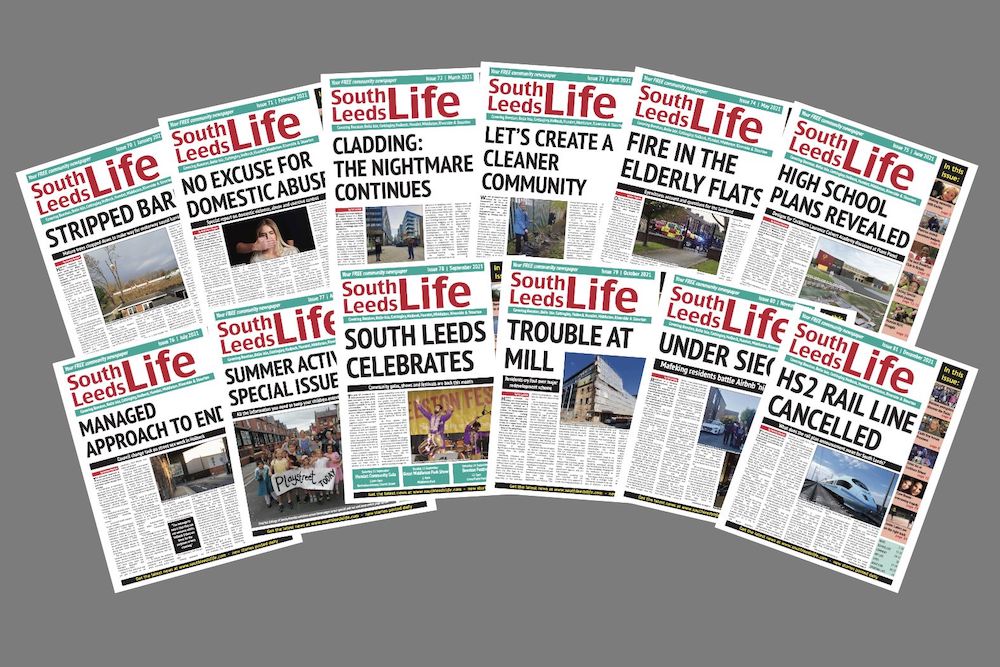 We all know that South Leeds is the most interesting part of Leeds, if not the universe. The issues we get to report on range from national issues like High Speed Rail and new approaches to managing prostitution to covering retiring vicars and teachers and the building of cycle lanes.

That poses a challenge when we review the stories of the year. Is a big story a story one with national significance? One that gets the most hits on the website? Or one that we know you wouldn’t find anywhere else? We’ve mixed and matched to hopefully give you a flavour of South Leeds in 2021.

In January we reported the first of several stories about cutting down mature trees. Highways England cut down trees screening the M621 in Hunslet only to find out they were holding the embankment together. They then spent most of the year reinforcing and building a new fence to, er, screen the motorway. We also reported the heart-warming story of two young lads from Middleton who featured in a national Co-op TV advert.

In February we featured a number of articles about domestic abuse and the lived experience of South Leeds women. We also reported that Asda had lost the latest round of its battle to stop new shops being built on the Benyon House site next to its Middleton store. This is a site we’ve been reporting on since we started back in 2010. Oh, and the Canal & River Trust cut down trees by the River Aire, to improve visibility.

March saw Olympian Alistair Brownlee put his weight behind the campaign to sort out the steps at Skelton Grange Road bridge over the Aire & Calder Navigation. We published several updates over the year and, fingers crossed, it looks like both a short term and a long term solution will be forthcoming.

April started with another tree story as our April Fool’s Day lead claimed that the Council were cutting down all the trees in their parks for health and safety reasons. Obviously they are not, but some maintenance was being carried out which gave us some great pictures to put with the article. There was also good news for the future of the iconic Temple Works in Holbeck as The British Library shared plans to move into the building once it’s restored.

In May we reported how the wonderful Hunslet Club is going back to its roots by opening an open access youth club. The project has been a great success, providing a space safe for youngsters to go in the evening.

Plans for the new secondary school to be built in Middleton were revealed in June. The permanent home for the new Cockburn Laurence Calvert Academy will be on the site of Middleton Park High School, latterly the Council’s Highways offices, next to Middleton Leisure Centre.

The controversial Managed Approach to street prostitution came to an end in July. The scheme had been suspended since the Covid pandemic struck, but the Council and Safer Leeds revealed that it would not resume and street sex would not be tolerated in industrial areas of Holbeck any longer. Many residents breathed a sigh of relief, but the question remains, how will sex work by managed in the area in the future?

August is traditionally a quiet news month, the so called silly season. With few local households able to take a holiday, we published details of the many family friendly activities organised locally. We also reported on turmoil at Hunslet RLFC where Coach Gary Thornton was sacked after the team gave up a 22 point advantage in the last ten minutes of their match at Coventry.

A shop changed hands in September. Not a big story in the wider scheme of things perhaps, but Beeston has had a Co-op since 1886 and it’s a local landmark. It was quite a shock attracting the most shares of any of our posts on Facebook this year. On a happier note, community events were back with Hunslet Gala, Beeston festival and the Great Middleton Park Show all returning. Another long running story came to a conclusion as the controversial Stourton Park & Ride scheme opened in September.

Another contoversial and long running story was the building of two cycle routes in South Leeds. The Elland Road route was opened in September and the Dewsbury Road route in October. The story isn’t over yet however as there are issues at the entrance to Clarksfield Allotments and railing haven’t been replaced at several pedestrian crossings.

In November we reported how the peace in two quiet Beeston streets had been disrupted by houses being let through Airbnb and used for raucous parties. It gave us the chance to roll some bang up to date Boer War puns, but this is a serious issue and the planning process can be slow and drawn out, so I suspect we will still be reporting on this issue through 2022.

December brought another national story that affects South Leeds, as the government cancelled the High Speed Rail line, HS2, to Leeds. We left the transport issues to other news outlets, but this decision will affect us in two ways. Firstly, the new station planned for the South Bank area of Hunslet won’t go ahead, this was seen as a catalyst for the redevelopment of the area. Secondly the government hasn’t let go of the land earmarked for the route, presumably in case it changes its mind, leaving residents in limbo.

The retirement of long serving teacher Tracey Cunningham in Beeston was a story that might not have been picked up elsewhere, but clicked with our readers. As did the retirement of Rev Andy Myers in Middleton.

The big stories online often involved crime, which is important, but doesn’t define South Leeds. However, the biggest hitter online was an article written by our local history expert Ken Burton. It wasn’t even written this year, but in July 2020, and involved a sewing machine that had passed down the generations of a family since Victorian times and ended up in Beeston. The story of a family and a Singer Sewing Machine (Number: 2261060 490260) clocked up 20,806 views this year (11,255 in December alone). It appears to have been picked up by the international sewing community. Of all the stories we’ve published this wasn’t the one I would have bet on to ‘go viral’.