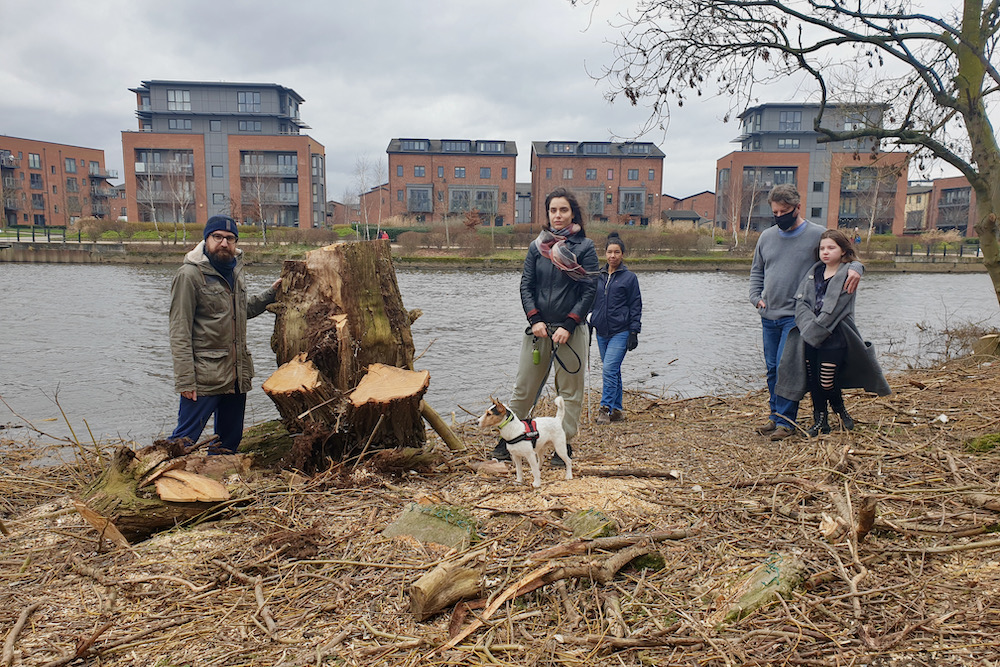 Residents on the Hunslet riverside are accusing the Canal and River Trust (CRT) of “environmental vandalism”, turning the local riverbank into a “barren wasteland” after unannounced tree-felling along the River Aire this month.

On 18 and 19 February a large team of contractors on barges, felled several dozen mature trees with chainsaws on the stretch of river between Leeds Dock and Thwaite Mills.

The work had not been pre-announced locally, even though residents last year formed a ‘Friends of the Aire’ community group – specifically for dialogue and collaboration with CRT, the national charity that manages the majority of UK rivers and canals.

Seán McGinley, the regional CRT director, insisted in a statement that it was essential maintenance on trees that either compromised the sight lines of boaters, or posed a safety hazard. He stated that all such work followed an Environmental Appraisal, and that communication with local stakeholders was not always practical.

But Karen Peters, core member of the Friends group and riverside resident, said:

“We understand essential maintenance must take place, but CRT’s wholesale approach to taking trees down, or coppicing them to within an inch of their lives, has left a wasteland.

“Those trees were key parts of the local ecosystem. They help prevent flooding. They blocked the Cross Green industrial estate from view: not any more.

“And they were genuinely uplifting, like the very pictures CRT use on their website to promote the waterways! Their response was disappointingly basic and dismissive, but we’re going form a more robust accountable relationship with them for the future.”

For more info or to get involved with the Friends of the Aire, find them on Facebook here. More on the CRT at: canalrivertrust.org.uk