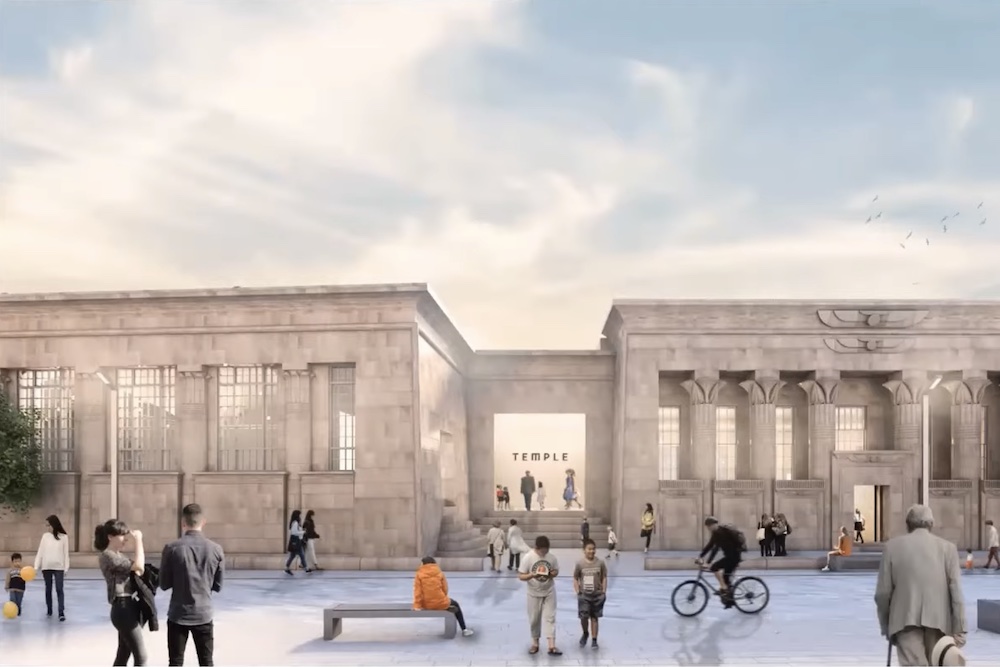 Temple Works was built as a flax mill in 1838-41 by John Marshall, more recently it was used as a warehouse by Kay’s catalogue.

Having lain empty for years the building gained a ‘meantime use’ as an arts venue, under the stewardship of Temple.Works.Leeds. The building was bought by developers CEG who stepped in when it was put up for auction in 2018.

David Hodgson from CEG told the meeting that since they bought it, they had spent their time understanding the Grade I listed building which is in a precarious state. The company have had to use drones and robots to safely survey the building in detail, spending £3.5m to date.

The revolutionary design which created the largest room in the world when it was built, relies on cast iron tie bars to hold the building together. These are now very old, corroded and brittle.  When one failed in 2008 there was a partial collapse of the frontage throwing debris onto Marshall Street.

One of the main problems is extra weight loading to the roof created in the 1930s when depressions between the iconic roof lights were filled in with bricks and rubble to create a flat roof. The extra weight is pushing the walls outwards, but to date the tie bars have held the building together.

CEG now believe they can save the building, but it will take several years. Firstly, they plan to stabilise the building internally with a framework of scaffolding. This will have to be erected bay by bay for safety reasons. Having looked at alternative solutions for long term repair, they plan to replace the cast iron tie bars with a similar system but using modern materials.

As well as the physical renovations, they have looked at how the various spaces within Temple Works and immediately outside could be used.

It seems likely that the main user will be The British Library. Jamie Andrews and Rachel Withington spoke about their plans to create a British Library of the North in Leeds for which Chancellor Rishi Sunak announced there was £25m as part of the West Yorkshire devolution deal last year.

The British Library has been connected to Leeds since its creation in 1972. It has a large facility at Boston Spa near Wetherby, housing over half the national collection: some 100 million objects including books, recordings and newspapers (even South Leeds Life).

Their plans for Temple Works include exhibition and events space, innovation and business support space and education and community space. On top of this, CEG are keen to see Temple Works and the surrounding area being active 24/7 and hope there will be a mix of office and business use, cafes, restaurants, and public open space.

CEG also own Draper’s Yard, the building adjacent to Temple Works on the corner of Sweet Street, built by Kay’s in 1953. The building is currently being stripped out, but the frame of the building is to be kept and an announcement on its future use is expected in the next few weeks.

You can watch the whole meeting here:

3 Replies to “The future is shaping up for Temple Works”