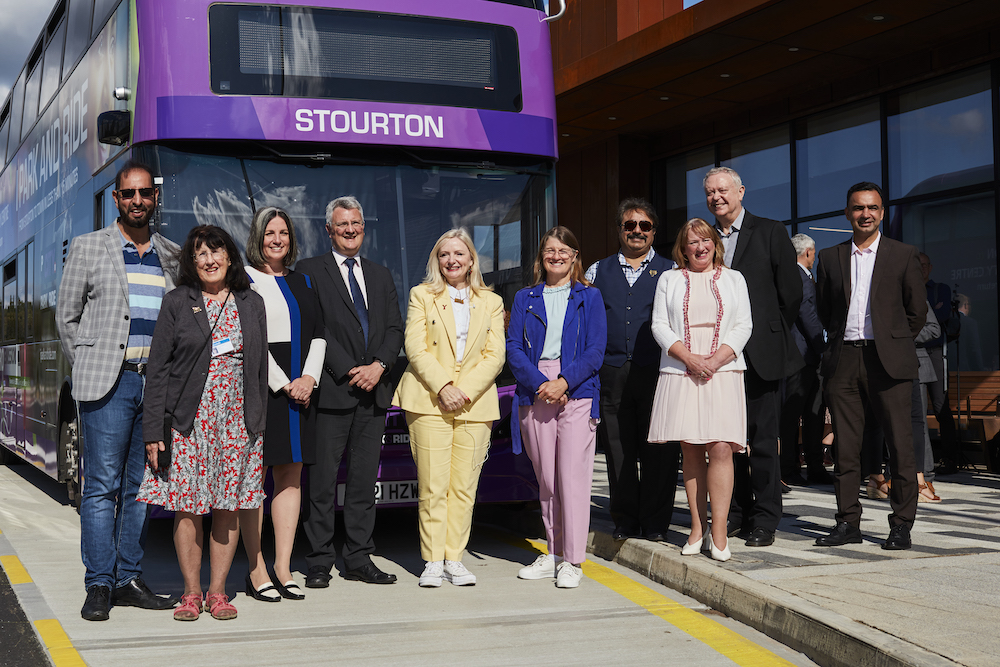 The controversial Stourton Park & Ride was officially opened by the Minister for future of transport and environment, Rachel Maclean MP on 16 September 2021.

Stourton Park & Ride is the third park and ride site in Leeds alongside Elland Road and Temple Green. It opened its doors to customers on 6 September and is now attracting a steadily growing number of users.

Stourton Park & Ride has buses running every 10-15 minutes and costs £3 for a return ticket. There are discounted fares for seniors, blind and disabled concessionary pass holders and up to three children travel free with every fare-paying adult. There’s free WiFi on all the fully electric buses and the facility provides a well-lit, secure parking facility with CCTV.

The official opening marks the 150th anniversary of public transport in West Yorkshire. On this date in 1871 a horse tram commenced between the city centre and Headingley. The horse soon gave way to electric trams, trolleybuses and petrol buses, the latter quickly being superseded by those with diesel engines.

Transport Yorkshire Preservation Group and the Aire Valley Transport Group brought two vintage buses to the Park & Ride site for pictures against their modern counterparts. Technology has accelerated this century and the UK’s first fully solar-powered park and ride site is served by a fleet of zero-emission electric buses that operate shuttle services to and from Leeds city every 10 minutes. 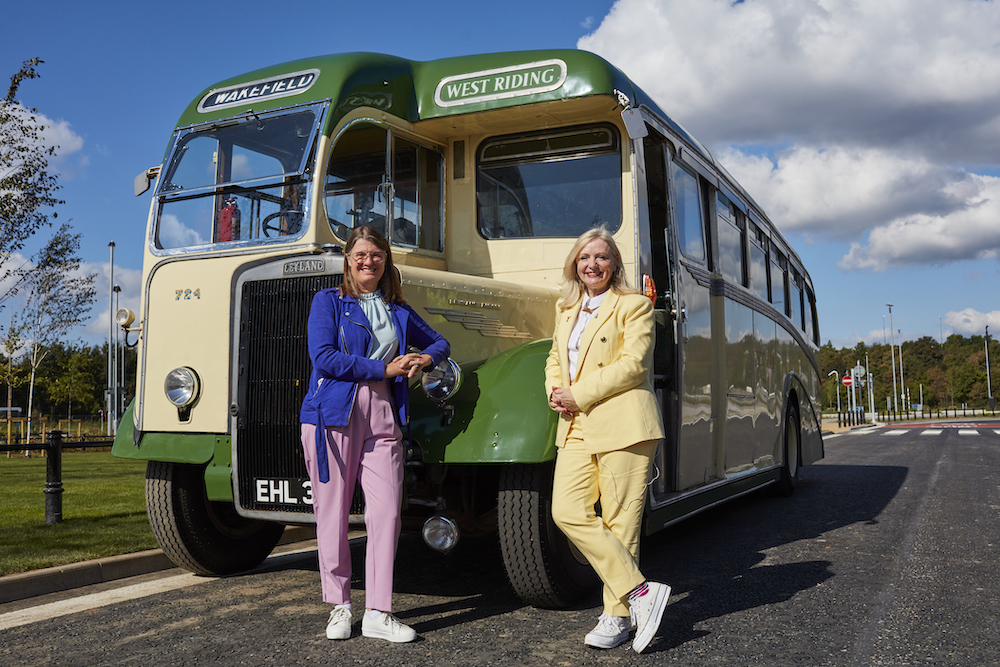 The scheme is delivered in partnership with Connecting Leeds at Leeds city council, West Yorkshire Combined Authority (WYCA) and First West Yorkshire who supply the buses and service. The introduction of park and rides at strategic locations around the city contribute to reduce congestion in the city centre which will improve air quality by reducing carbon emissions in the public realm.

“We provided over £170 million to help Leeds City Council provide better, quicker and greener journeys for local people and it’s fantastic to see some of that money go towards a green initiative like this one.

“This brilliant new scheme will slash journey times and congestion while improving air quality and accessibility to greener modes of transport – giving local people the journeys they deserve.”

“I was delighted to attend the official opening of the UK’s first solar-powered Park & Ride at Stourton, on such a significant anniversary for public transport in West Yorkshire.

“We’ve seen a fantastic response from people since the site opened earlier this month. Commuters are now using it regularly, reducing their carbon footprint and contributing to cleaner air in Leeds and the region.

“Stourton Park & Ride plays an important role in our work to tackle the climate emergency and the wider aim of transforming the Leeds City Region into a net zero carbon economy by 2038. It’s benefiting the environment, the economy, and our public transport infrastructure.”

“It was a pleasure to attend the official opening event of Stourton Park & Ride, the third park and ride site in Leeds which will cater for commuters coming from the South of Leeds.

“Park & Ride sites are important to help Leeds achieve the ambition of becoming a city where you don’t need a car by enhancing public transport and decarbonising travel. We know that people are willing to make small gradual changes from switching to electric vehicles, making more use of public transport, and reducing car reliance.

“Our ambition is to be net zero from carbon by 2030 and Zero emission park and rides like this one will help create a more people-focused city: fewer cars on the road, more space for people, regular bus services, creating more healthy and liveable streets.”

“It was great to see so many people attending Stourton’s official opening. Usage of this ground-breaking facility is already growing.

“As the UK’s first solar-powered Park & Ride, Stourton is enhancing transport links in Leeds and West Yorkshire and making a positive impact on the local economy and businesses. The reduced commuting times and lower commuting costs are a major boost for people working in the city, in terms of both their wellbeing and their daily routines.

“And of course, Stourton Park & Ride is also making an important contribution to the Leeds City Region achieving a net zero carbon economy by 2038.”

Stourton Park & Ride boasts 45 solar panels that cover the size of 18 tennis courts and generate the capacity to power the entire site’s electrical needs via an innovative battery storage system.

“The Minster enjoyed for herself the speed, simplicity, and comfort of a zero-emission journey from the city centre to Stourton in less than 15 minutes. It’s a trip that is growing in popularity since we began the service last week as people discover how easy it is to get in and out from the south side of Leeds. We expect this to continue as more customers see the benefits of time and money saved through sustainable travel which helps to reduce congestion and create cleaner air in the city.

“We were also able to demonstrate how, with fully electric buses, we are building on the continued success of Park & Ride in Leeds with our regional and local authority partners.”

The £38.5 million public transport project situated in the Stourton area of Leeds, at junction 7 of the M621, will be the preferred park and ride site for commuters coming from the south-east of Leeds via major routes like the M1, A61 and A639.

Stourton Park & Ride has been made possible by funds obtained from the Department for Transport to develop Leeds’ Public Transport Investment Programme, together with a grant that was awarded by the European Regional Development Fund to create a smart energy grid on site using sustainable technology.

BAM Nuttall, appointed to develop the site, started detailed designs in January 2019, to turn a field into this fully operational, sustainable park and ride today. This success is a result of strong collaboration across the construction partners, Leeds City Council, their Development Partner WSP, West Yorkshire Combined Authority and the Department for Transport, and underpins the ambitious programme to transform the city’s public transport system. 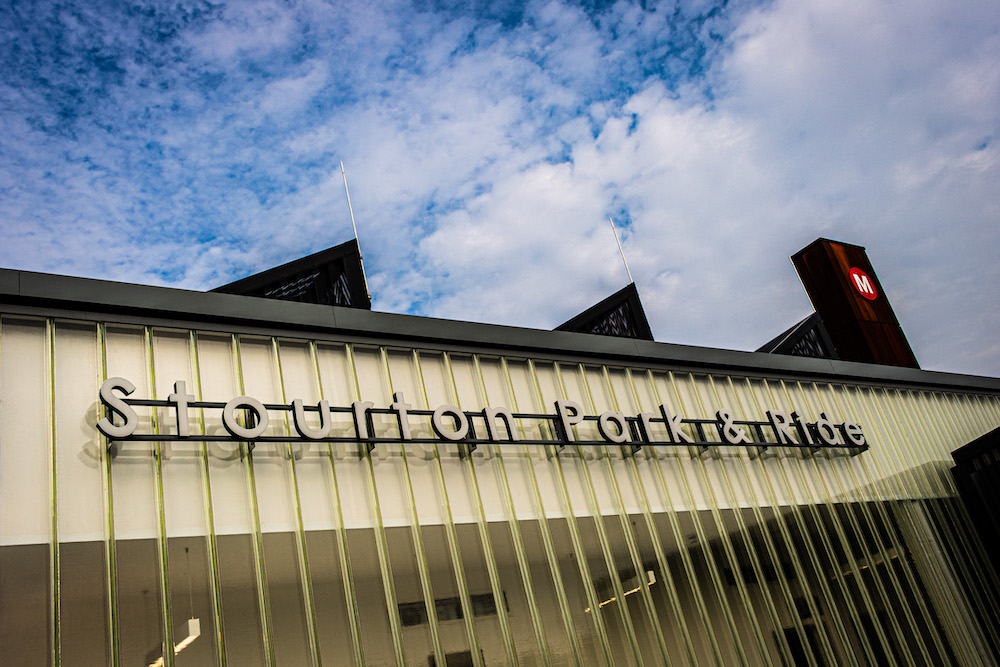 As well as using solar panels to generate electricity for lighting, electric vehicle charging, CCTV security and heat for the terminus building and waiting room, the design of the site has also considered opportunities to achieve benefits of nature. Over 11,000 trees and shrubs create an attractive environment for people using the facilities, walking or cycling, to enjoy. The terminus building features a ‘green roof’, helping to reduce urban air temperatures and creating a habitat for wildlife.

“BAM Nuttall is proud to be involved in the extensive collaboration across Leeds City Council, businesses and local communities, delivering the first fully solar-powered Park & Ride in the UK at Stourton. The ambition to reduce congestion, improve air quality, and save carbon has been a key focus for teams leading the design and delivery of this sustainable transport hub.

“We’re also delighted our Connecting Leeds projects have created opportunities for over 1,000 people seeking sustainable careers, from expert engineers and construction roles, to over 20 apprentices. Almost half of BAM’s team live in and around Leeds and Yorkshire. Working together they’re building experience of being part of this collaborative team, while playing a part in achieving numerous benefits for their neighbours. The partnership also enjoy supporting local initiatives, such as Mencap’s Leeds internship programme, which has led to a permanent position for one young lady with BAM.”

For more tickets and information about the Stourton Park & Ride, please visit: iParkandRide.