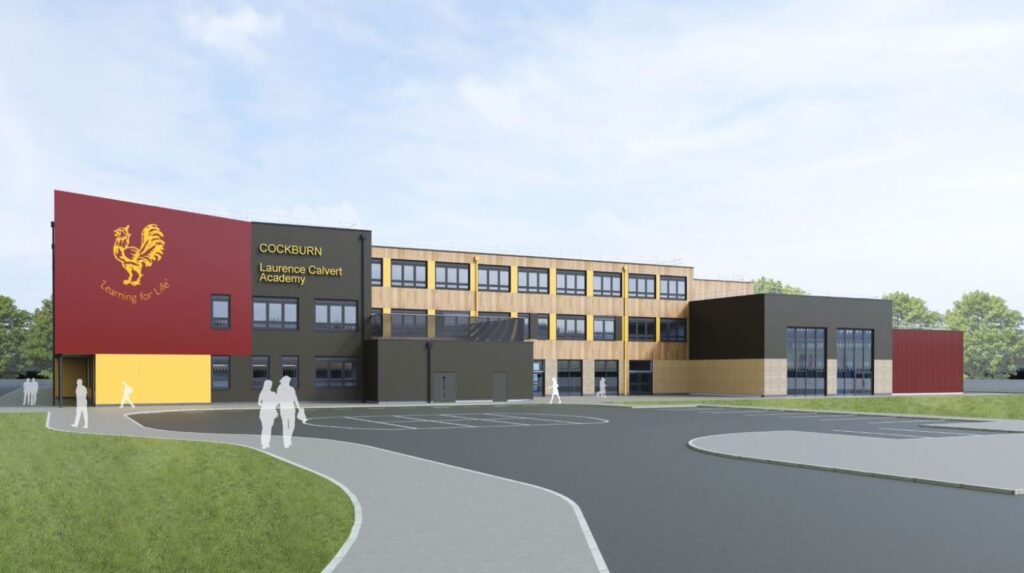 Indicative designs for the new Cockburn Laurence Calvert Academy in Middleton were unveiled at a meeting of the South & West Plans Panel last month.

The new school is being built to address the shortage of secondary school places in south Leeds and will be seven form entry, eventually accommodating 1,050 students across Years 7-11.

Councillors on the Panel broadly welcomed the designs, which include a drama studio next to the main hall, as well as specialist drama and music rooms. A full size sports hall will be complemented by outdoor pitches and their are plans to share sporting facilities between the school and Middleton Leisure Centre next door.

Councillors expressed some concern about the design of the kitchen block, which they felt spoiled the school’s facade.

It is to be built on the site of the former LCC Highways offices. The main access to the school for visitors and deliveries is from Middleton Ring Road. A staff car park will be accessed from Acre Road.

Traffic is always an issue around schools and it seems inevitable that the Leisure Centre car park will become an unofficial drop off point. However, 75% of the initial intake of students live within walking distance of the school, which is also well served by service buses for those travelling further.

The school will open this September on a temporary site behind St George’s Centre. The site will be fully remediated once the new school buildings are completed.

Both the Phase 1 and Phase 2 buildings will be a state-of-the-art modern school buildings with fantastic facilities and engaging learning environments.

“It is such a privilege to lead the new academy and to be working with students and their families to create a community from the very start. Year 7 will be full from September and we have a waiting list for places in our opening year.”