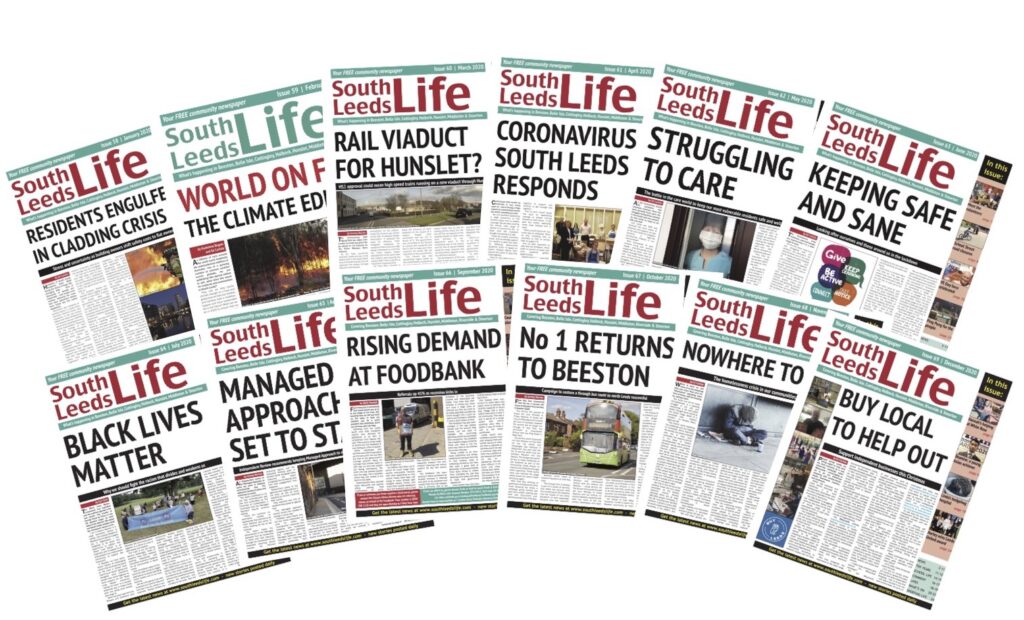 2020 was quite some year, like none of us has ever experienced. Looking back over South Leeds Life’s coverage of issues we have tried not to dwell on the virus, although it tinges every story from March onwards.

We didn’t go for our newspaper front page stories either. Instead we’ve picked one of the bigger stories from each month, but we’ve deliberately picked some of the more positive stories for you:

Not knowing how large supermarkets would feature in our lives this year, we reported in January the announcement that Asda’s Middleton store would be a trailblazer for sustainability.

On 3 March we reported that fifty children in South Leeds had been allocated secondary school places across the city, as far afield as Seacroft. Two days later we published a joint statement from Leeds City Council and Cockburn School announcing 60 additional places for September 2020. The story continued to unfold through the year as details of the works were revealed,  funding was agreed for extra classrooms and sports pitches to be built at Cockburn; the controversial decision was ‘called in’, but approved a second time.

By April we were in full lockdown, but with fine weather many people were taking advantage of South Leeds parks and greenspaces. Memorably, one local resident took their pet snake with them for a walk in Middleton Woods. The photo of a snake in Middleton Woods went viral on social media. We tried to set the record straight.

In May we reported that School Streets were to be trialed at Clapgate, Ingram Road and Lane End primary schools. The closure of roads to motor vehicles at the start and end of the school day was designed to improve road safety and cut air polution from idling cars. Some the schemes have been amended, but are generally seen as a success with more schools including Middleton St Mary’s and Hugh Gaitskell primary schools joining the scheme.

Street closures to be piloted at three South Leeds schools

As people came together support each other, one street in Hunslet decided to play games in their gardens and raise some funds for the NHS.

The virtual ban on international travel left one man from Gambia on an extended stay in South Leeds. But that didn’t stop him being elected as Chief back in his village in Africa in July.

Gambian village Chief takes up his post from Leeds

Raja Ejaz Hussain became a local hero in August. The popular 69 year old shopkeeper thwarted a would-be theif, trapping him in the shop until police arrived.

We reported in September that the No 1 bus route would be reinstated as a through service to Lawnswood. The route had been cut in two by roadworks in the city centre, but residents won their campaign.

No 1 bus returns to Beeston

October saw plans revealed for new council housing to be built in Middleton.

We finished the year on a high note as Austin and Rocco from Middleton entertained the country and brought tears to a few eyes in the Co-op Christmas advert. This good news story was one of our most read articles of the year with over 9,500 views.

We will carry on reporting both positive and negative stories as we move into 2021. If there are stories you think we should be reporting please contact us by calling 07894 583966 or email: info@southleedslife.com