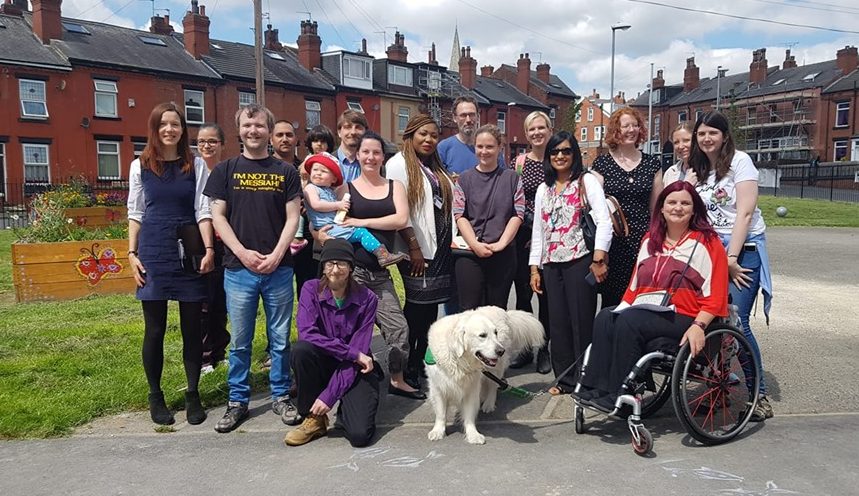 The Friends of Trentham Park in Beeston Hill are this Saturday (17 August 2019) holding an event to mark the reopening of their ‘pocket park’ – and everyone’s invited!

The park is a small triangular space in the heart of the dense terraced housing of Beeston Hill, and was until recently fairly underused and unloved. However, a successful series of projects over the past two years (previously reported upon here, here, and here, for example) has seen the space transformed, with a local residents-led ‘Friends Of’ group now well-established, and an ever-growing number of local residents using and enjoying it.

A major recent refurbishment coordinated by the Council, which has included the introduction of new play equipment (more details here), has seen the park closed for much of the past two months – but the work’s now complete, and this weekend’s event will celebrate the ongoing development of the park.

Join the group between 1pm-3pm this Saturday, for ribbon-cutting, face painting, speeches, free ice cream, and more (the official element is likely to be at around 1.30pm).

Brendan Devereux, a local resident who chairs the ‘Friends Of’ group, commented:

“Many thanks to everyone who’s helped develop the park over the past couple of years. It used to be such an unloved space, but it’s been amazing to get involved, alongside all the partners, and see our group emerge. I’m immensely proud: we’ve come such a long way in such a short time, and it actually looks like a park now! See you Saturday if you can make it – or get in touch or get involved anytime.”

For more info on the group and the park, their FB page is here. The park is immediately next to Colwyn View (LS11 6LN).