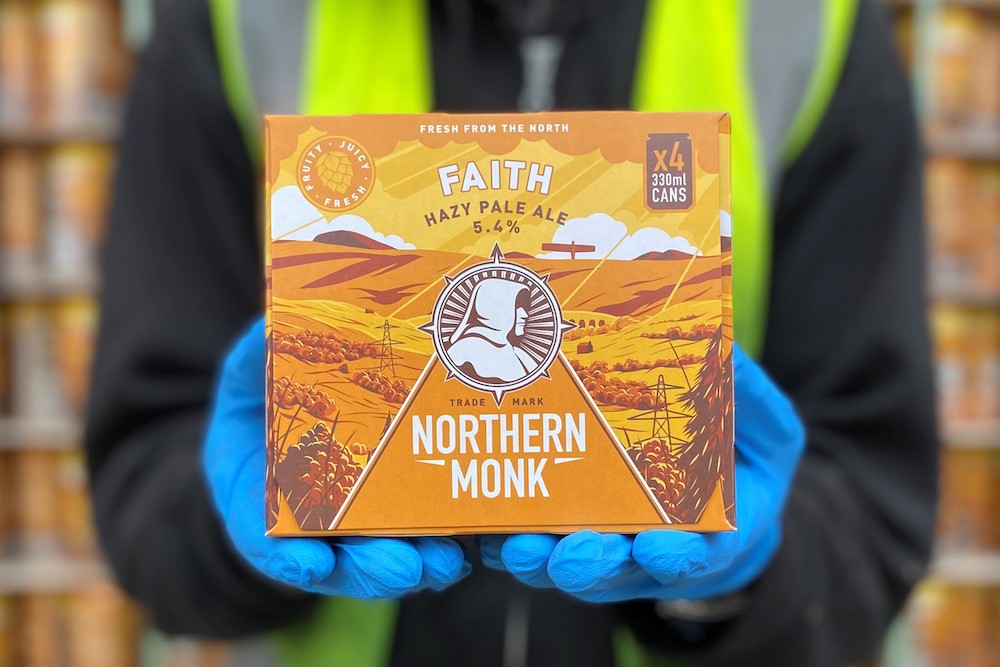 On Sunday (22 November 2020) Northern Monk, the Holbeck-based brewery, gave away 5,000 cans of their flagship beer, Faith, to NHS employees, frontline care workers and educators across the UK. As a thank you for continuing to care for, and teach, the country during this difficult time, 5,000 cans of Faith were listed free of charge on Northern Monk’s online shop, encouraging people to ‘Keep The Faith’.

This is the second time that Northern Monk has completed a 5,000 can donation – the brewery did the same thing back in March, and wanted to repeat the process for the people keeping our communities safe, and informed, during this second national lockdown.

The complimentary beer was available in packs of 4X330ml cans via Northern Monk’s online shop (www.northernmonkshop.com), and all cans were claimed. There was no proof required to claim the cans, Northern Monk put their faith in the community to join them in giving a gift to front line workers, and to help the brewery notify the relevant people about the free cans, rather than claiming the beer for themselves.

This is one of several charitable initiatives, related to the impact of the pandemic, that Northern Monk has done since March. Aside from donating 10,000 free cans of Faith to front line workers, Northern Monk has also undertaken the following:

In May, Northern Monk employees climbed the ascent and descent of Mount Everest via their staircases, whilst in lockdown, to raise money for their For The North Foundation grant scheme that gives £5,000 grants to community and environmental causes in the North. Between May and June, Northern Monk donated £10,000 to three brilliant Yorkshire-based projects through the For The North Foundation – Rooted For Girls, the BME Hub and The Racial Justice Network.

In July, Northern Monk released LDS AS ONE, a beer designed to support the hospitality industry in Leeds during lockdown. All stock was supplied to venues for free, so they could keep all proceeds, or gift the cans to their employees.

In August, Northern Monk received 1021 job applications for a packaging position, which highlighted the recent jobs crisis in Leeds. Led by Northern Monk’s HR Manager, the brewery worked with 50 ‘applicants’, free of charge, through an in-house employment scheme that was created as a result of receiving such a high volume of applications. The scheme worked with 50 currently unemployed individuals, and helped each of the 50 people by assisting with their CV, and conducting a 30 minute practise Zoom interview with them – giving the applicants vital advice at a time when unemployment surged due to Covid-19.

Northern Monk’s aim is to support the community in the North as much as they can, during an incredibly difficult time for all. By running the free Faith initiative once again, they are hoping to shed a little light in the difficult days that the people on the front line are facing.

“In the midst of the second national lockdown, and in the run up to the festive period, there’s never been a more important time for us to show our support for the incredible work that NHS staff, front line care workers, teachers, lecturers, support workers and more, are doing during this time. At the height of the COVID-19 pandemic, we gave more money to charity than we made as a business – and we don’t intend to stop giving yet. Thank you to everybody that helped us keep the Faith and get the beer into the hands of the right people this weekend.”