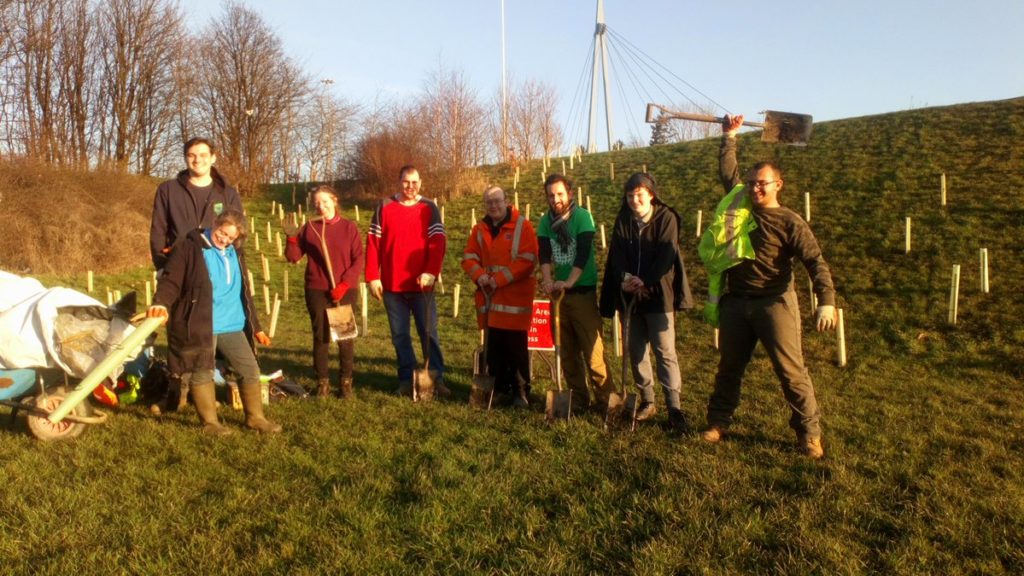 Dozens of volunteers of all ages got digging together during January 2020, planting 2,000 saplings across Hunslet – in what is planned as the first phase of a major tree-planting initiative across south Leeds.

Increasing tree-cover nationally and internationally is widely seen as a key way to tackle climate change. Trees absorb greenhouse gases including carbon dioxide (CO2) and carbon monoxide (CO) as well as enabling soil to better capture these gases too. And against the backdrop of ongoing concern about poor local air quality and the health impact for local communities, trees play a crucial role in cleaning pollution out of the atmosphere. They also help reduce flood risk, and improve ecosystems (natural networks of animals and plants), and mental wellbeing for local communities.

Brenda Barlow, chair of Friends of Hunslet Moor, was out helping for two days with her grandson Joshua. She commented:

“It’s been wonderful, seeing the community come together, helping to create a greener Leeds. We’ve also planted the trees in such a way that we hope they’ll stop other problems like flytipping and anti-social quad biking. Joshua and I are proud to have been part of it”.

Cllr Paul Wray, Hunslet and Riverside, who helped arrange the scheme and lent a hand with the tree planting, said:

“Hunslet and Riverside and Beeston and Holbeck Wards have some of the lowest tree coverage in Leeds, owing mostly to their long industrial past. But the evidence is clear, trees and nature not only protect our environment by capturing carbon but are vital for our own ongoing health and well-being needs. If we’re to tackle many of our communities deep seeded health inequalities, we need to make sure nature is within easy reach of all of our citizens.”

“We’re working hard with different Leeds City Council departments and other land owners to identify the land needed to plant tens of thousands of tree saplings across both the wards during the next planting season. Sites will be confirmed later this year after officers have completed the required ground checks.”

Trees cover just 13% of the land in the UK, compared to a European average of 35% – and campaign groups including Friends of the Earth are lobbying the government to double tree cover by 2045. The issue received considerable attention during last year’s General Election – but government funding for tree-planting has been dropping in recent years in England.

Further planting is scheduled around the local area for next winter. Contact the Leeds City Council Inner South Community Committee or TCV (Hollybush) for more details or to get involved – or watch out for more information in South Leeds Life.