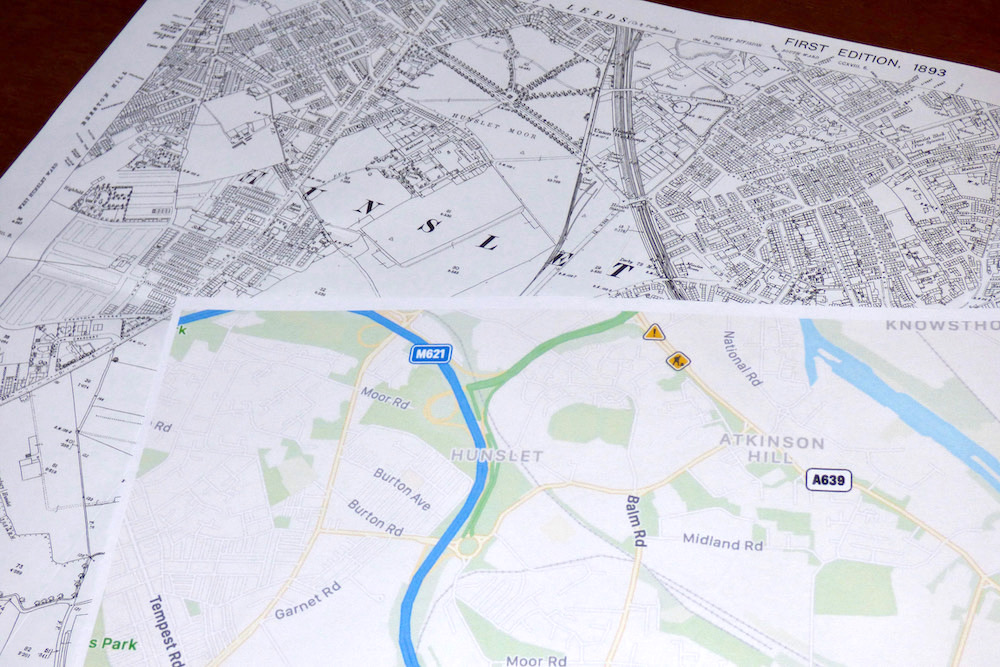 People get very passionate about where they live. Which is great, because it often inspires us into community action – and we should celebrate that there’s plenty of that here in south Leeds.

But scratch below the surface, or simply get debating on social media (!) and there’s a load of confusion and ambiguity about the names we give our neighbourhoods. And people get very roused about it …

I live just off Tempest Road. Almost everyone agrees that this is Beeston – most famously and tragically, in 2005, our neighbourhood got labelled as the home of the so-called ‘Beeston Bombers’.

But historically, that’s not been the case: this area was once very much part of Hunslet. There’s the Hunslet Fire Station on Dewsbury Road; we used to have ‘West Hunslet’ Conservative and Liberal clubs; and maybe it’s why Google Maps bizarrely brands this area as ‘Hunslet Carr’ – I’ve tried to set them right, but had no joy.

So, to this day, there are some in the Council who insist that we’re still very much Hunslet. After all, we’re in the ‘Hunslet and Riverside’ council ward (and before that, ‘City and Hunslet’); every year at election time, there’s confusion that we’re not in the ‘Beeston and Holbeck’ ward.

Indeed, there’s always a tension between the different ways in which officials and locals define places. Another example here is the old so-called ‘Holbeck’ police station, previously on Burton Road – because that’s what the Police used to call their south Leeds division. The issue was compounded when Aldi bought the site, and built what they to this day call their ‘Holbeck’ store: can someone put them out of their misery?

And there are also undoubtedly situations where people don’t want to be associated with particular places. I know of Beeston residents (nice folk) who after the 2005 bombings starting telling people they lived in ‘Cross Flatts’.

Our 2017 April Fools story – about an independence movement arising in overlooked Millshaw – playfully touched on this theme. And apparently proud residents of the historic Beeston neighbourhood (the southern side of Cross Flatts Park) petitioned the national Electoral Commission to ensure our side of the park was lumped into the Hunslet council ward (it worked).

Maybe that’s partly why the name ‘Beeston Hill’ has emerged – to distinguish our neighbourhood from other neighbourhoods within Beeston.

As I wrote in my article ‘Is Beeston so bad?’ in 2019, this area is now a sprawling community with 30,000 residents. How times have changed: Beeston was once a hamlet at the top of Wesley Street, a minnow in the shadow of Holbeck and Hunslet.

But there are those who argue vigorously (yes, really) that ‘Beeston Hill’ is essentially just one street (Beeston Road), not a neighbourhood; that the notion of a place called ‘Beeston Hill’ is a new and divisive idea we should knock on the head. The 1908 map is certainly against them: the area at the top of Tempest Road, around Cad Beeston (where the ancient manor house is), is boldly named ‘Beeston Hill’ on there.

But more generally, who gets to decide what we call any given neighbourhood? Surely anyone can call any place anything they like. If you’re alone in doing so, that’s pretty meaningless; but if a fair number of people do so (and I’d be interested to know how many Beeston Hill residents recognise that name), it becomes a public reality – right?
A parallel perhaps is the emergence of the name ‘Beeston Village’ – the name some people are starting (just in the past few years, it seems) to give to ‘old’ Beeston, south of Cross Flatts Park. Does this name have history? Does it make sense to people? Do they like or use it?

Branching out, it certainly gets blurry at the edge of neighbourhoods. Where does Beeston end and Holbeck begin? You’d certainly get a very different answer today, compared to 1940 (the motorway, built in the 1970s, was a game-changer).

And what about the Longroyds neighbourhood at the northern end of Dewsbury Road? It’s increasingly become known as ‘Hunslet Moor’ – and some residents there I know deliberately adopted that name, to create a distinctive local identity (and it’s coincided with a growth in community action there). But is it also Beeston, or also Hunslet, or neither? Ten local residents would give you ten different answers.

We’d love to hear more from readers about the places they call home. Back in the day, Holbeck extended all the way to the railway station – but does that resonate with residents of so-called ‘Holbeck Urban Village’ (is that even still recognised as a place)? And others in Hunslet argue that their area truly encompasses everything like Leeds Dock all the way to Leeds Bridge. Do others agree? Is it a problem if they don’t? Or does anyone think they live in ‘Hunslet Lake’? Or how about Stourton? Please let us know!

It could be worse. The south Leeds community features great folk from far-flung places including Kurdistan, Balochistan, and the Balkan nations – regions racked by conflict and oppression relating to the politics of place and identity.

Let’s keep building neighbourhood identities – which can be such a driver for positive community action. But let’s not get too roused by our places and our identities, or things might get messy…

3 Replies to “The politics of place”