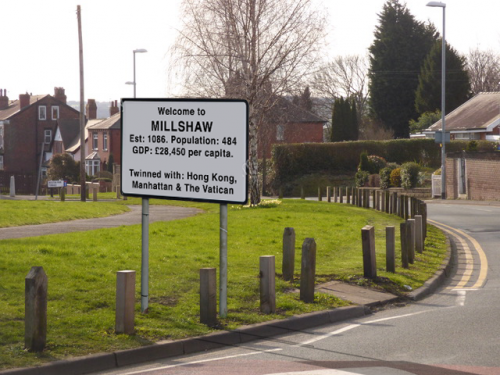 A mysterious ‘Welcome to Millshaw’ sign has appeared in the past couple of days on Town Street (LS11) – raising local smiles but also uproar from the Council. In the same week that the UK triggered Article 50 to leave the EU and Scotland asked for a second referendum, we ask: is an independence movement afoot in this small and overlooked corner of south Leeds?

Millshaw was originally an ancient hamlet that for centuries existed alongside Beeston – but it’s become subsumed into Beeston in the past decades. It contains about 250-300 houses running down Town Street and Crow Nest Lane from Beeston ‘Village’ (around the Coop and St Mary’s church), down to the ring road. It nowadays also features plenty of industrial and commercial units, as well as Elliot Hudson Sixth Form College, the Whistlestop pub, Beeston Primary School – and it even has its own football team, Millshaw Rangers.

This week, apparently on Thursday night, the 5 foot metal sign (pictured) appeared on the roadside there – firmly concreted in place. It reads: ‘WELCOME TO MILLSHAW. Est: 1086. Population: 484. GDP*: £28,450 per capita. Twinned with: ​Hong Kong, Manhattan & The Vatican.’ (*GDP: Gross Domestic Product, a stat usually used by countries to measure their economic wealth.)

“We know nothing, and have no time to engage in petty geopolitical struggles like this. We’re conducting a full and thorough investigation, and plan to remove the sign by the weekend. We don’t often act fast, but this is a priority: it’s a health and safety hazard, it’s misleading, and they didn’t even ask us for permission.”

We also spoke to several local residents – many of whom said it had made them smile, but none of whom knew who was behind it. One resident, Mandy Barricades of Crow Nest Mews, commented:

“About bloody time. Millshaw has lived in the shadow of Beeston for far too long. This community has got history, pedigree, and a bright future. We’re even featured on that big map at the city museum – but most people haven’t even heard of us, and certainly don’t know where we are! All credit to whoever’s put that sign up – let’s make Millshaw great again.”

The latest development is the emergence of a Facebook group, Save Our Millshaw, which purports to ‘aim to recover and preserve the essential identity of this ancient south Leeds neighbourhood before it is lost forever’. One post on there proposes renaming Beeston Primary School as Millshaw Primary School; another discusses whether the value of their homes might increase if the association with Beeston is lost. South Leeds Life will continue to investigate, and add further updates – watch this space.