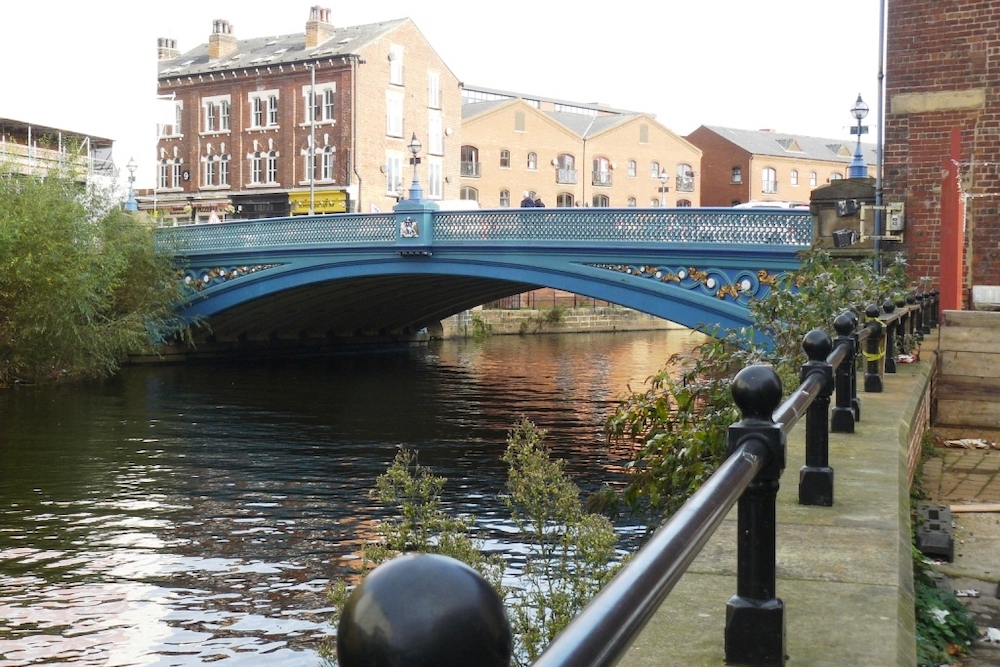 Last month we found out about the Old Leeds Bridge, here’s the story of the New Leeds Bridge:

The Mayor, Alderman J Barran, performed the ceremony of laying the foundation stone for the New Leeds Bridge on 20 September 1871.

The members of the Corporation in their robes of office assembled at the Town Hall at half-past three in the afternoon and led by the Chief Constable and a Company of police constables, marched in procession to the site of the bridge, the approaches of which were decorated with flags and banners.

The position of the stone to be laid was under the temporary bridge, and the space around the stone was comfortably enclosed and fitted up for those who were to take part in the Ceremony. 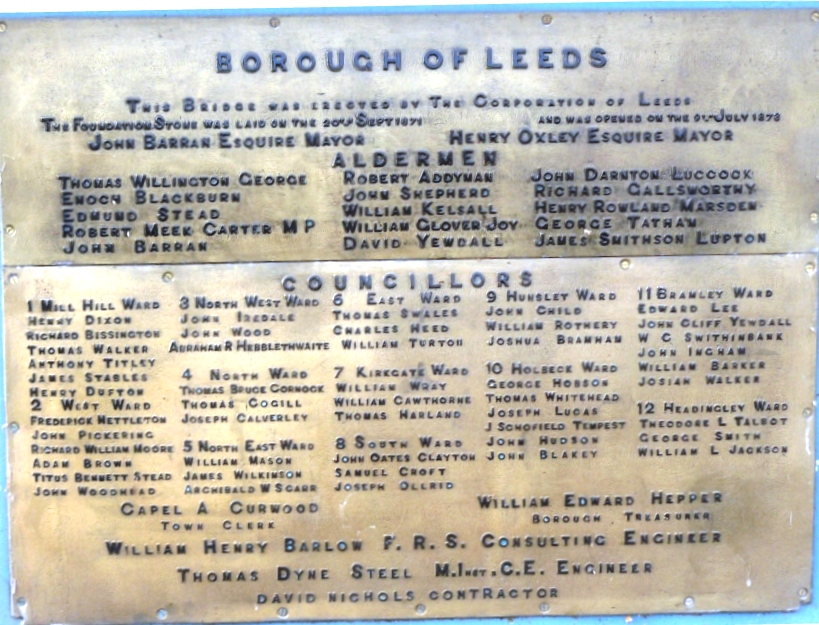 The Mayor was presented with a mallet and a handsome silver trowel with which to perform the ceremony. The inscription on the trowel read – “Presented to the Right Worshipful Mayor of Leeds on the occasion of laying the Foundation Stone of the Leeds New Bridge, on 20 September 1871”

A sealed glass bottle was placed under the stone, this contained copies of the local newspapers of the day, one of the Corporation’s Year Books, a photograph of the Town Hall, specimens of the current coin of the realm, and a Roll of Vellum containing a list of the purchases of the Property Committee, headed by a short memorandum stating the particulars connected with the laying of the stone. Construction work then carried on.

On 9 July 1873 the £23,000 New Leeds Bridge opening Ceremony was performed by the Mayor of Leeds, this was erected to replace the old and dangerous bridge that for many years had occupied this site (see our December edition).

On the invitation of the Mayor, Alderman Oxley, the members of the Corporation as well as a large number of gentlemen connected with the Public Bodies of the Borough met at Leeds Town Hall, and headed by a Military Band walked in procession to the new Bridge where, after prayers had been offered by the Vicar, Reverend Canon Woodford, his Worship the Mayor passed over the bridge and declared it open. On returning to the Town Hall the Mayor entertained 180 gentlemen to dinner.

This new bridge has a graceful single span across the river and is built on a skew with an angle of 11¼ degrees, the several arches of the old bridge have been replaced by one of 102 feet 6 inches in length, the centre of which is 12 feet 6 inch above the ordinary water line, good approaches and an easy gradient are thus assured.

The arch springs from remarkably good stone abutments of rusticated masonry and through the north abutment there is a seven foot culvert, and on the south side (for the bend of the river) a ten foot culvert.

Additional safety and stability are imparted by girders and cross-girders of wrought iron and covered with Malett’s Patent Buckled Plates. The minimum tensile strain of the wrought iron employed in the construction of the bridge is 20 tons to the square inch. Across the bridge are two 12 foot causeways of Yorkshire landings and the roadway is constructed of Mount Sorrel Granite and is 36 feet in width. The total width between the parapets is 60 feet as opposed to the 33 feet of the old bridge.

In the whole work – the construction of the new works, demolition of the old bridge, the dredging and sinking of foundations, the purchase and pulling down of the old property necessary to the bridge and its approaches, and the settlement of demands for compensation – an outlay of about £50,000 has been incurred. The Contractor was Mr David Nichols of Leeds, who’s tender was £15,319; Messrs Butler & Pitts, Stanningley, furnished the ironworks; and Mr. Coslett was the Clerk of Works. A proud boast at the time was the fact that London Bridge was less in width by four feet and Waterloo Bridge by no less than 18 feet when compared with the new Leeds Bridge.

The bridge has had fairly regular maintenance carried out on it over the years including making the carriageways narrower to cut down the amount of traffic with an island down the centre. Monday 8 January 2018 saw the bridge closed for major repair and renovation which was scheduled for 16 months and traffic regulations applying. All this lasted until Monday 14 January 2019 when the bridge reopened and all the final work was completed by April 2019.