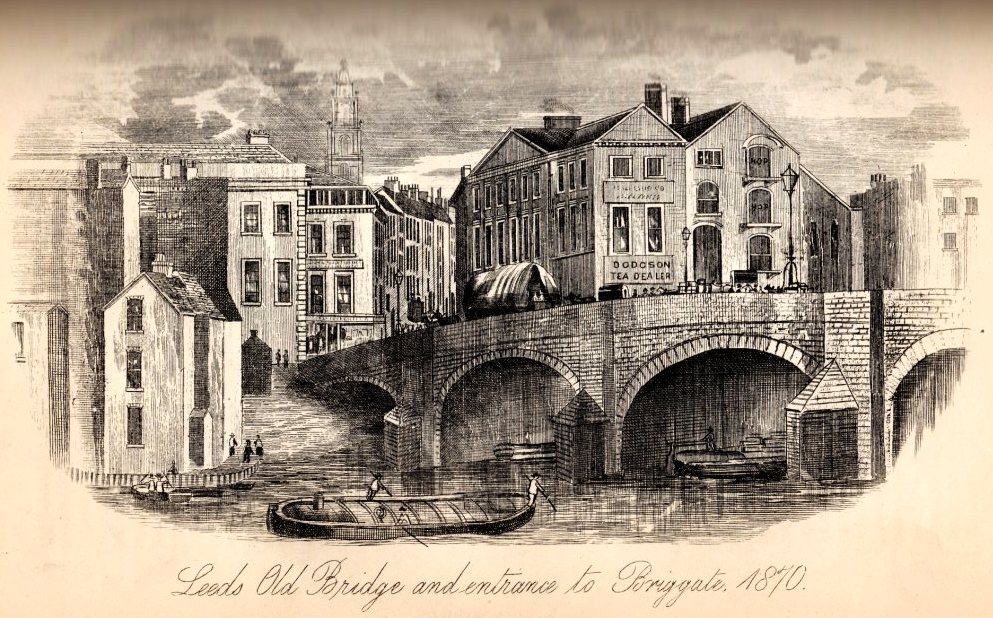 From the foundations of the Old Bridge were gathered details of the age in which it was founded. How our early ancestors crossed the River Aire here is not really known, but we do know that the Romans had a ford across the river just to the east of where our bridge now stands. This was found when a new Corporation Dock was being built off Dock Street.

It is thought that in Saxon times a wooden bridge was built to ease the crossing of man and animals. The year 1327 saw the first notice of a bridge across the River Aire with a Chantry or Chapel dedicated to St Mary but no mention of materials used in its construction.

In all probability, there was no stone bridge at Leeds prior to the 15th century, a direct piece of evidence for this can be found in the Register of William Booth, Archbishop of York, whose pontificate extended from 1452 to 1464, which “states that an Indulgence was granted to all who should contribute to the building a bridge of stone in Leeds”.

However we do know from a survey carried out in the reign of James 1 (1566-1625) there was a ferry where the bridge now stands, the profits of which formed part of the Jointure of his Consort, Anne of Denmark who died in 1619. The ferry house was where the Golden Lion was later built.

When the new stone bridge was built it was also endowed with a Chantry or Chapel to St Mary – this was unkindly described by some as an Ecclesiastical Toll Bar! In 1540 the Chantry was disestablished and disendowed and after this the history of the bridge becomes somewhat chequered and varied – a Grammar School, which seems to have lasted until 1728, a warehouse which lasted until 1760 when the chapel was demolished during the second bridge widening, then a market.

The bridge was used as a cloth market with cloth being laid on the battlements and benches. The clothiers came early every Tuesday and Saturday morning with their cloth where it was set up in local inns and public houses (the Leopard in Briggate bring popular with Farsley clothiers). At 7am it was deemed that all were present and the market bell was rung. Very quickly the market filled with people and in little more than an hour all business had been completed and by 8:30am the market bell rang again and the buyers disappeared taking with them any unsold cloth to the inns.

All this lasted until the 14th June 1648 when for greater convenience the market was removed to Broad Street (Briggate), but Its success as a market became so great that a flight of stairs was built from the north-west corner into the ‘tenures’ or tenter fields, where the open air processes of cloth manufacture were carried out; to build the steps stone from Kirkstall Abbey was used.

The Old Stone Bridge, when viewed by the people using it, was to all intents and purposes one solid structure whereas in fact it was really three separate bridges built side by side. The middle section was the original bridge; the one on the right hand side when crossing from Briggate was an addition in 1730 when the bridge was enlarged to have a double carriageway, two men being killed on this operation, while that on the left was a 1760 addition.

The underside of the bridge was some 9 or 10 feet in width but the road above must have been less than this because of the space the battlements occupied. Of the five arches, the first near Briggate spanned the tail goit of a mill which ran between a Master Green’s house and the Schoolhouse; the next was and had been for some time passed dry; the three remaining arches spanned the river.

The first, or goit arch, was a more ancient construction than the other arches and when the Chapel adjoining it was pulled down to make way for the 1760 additions the foundation stones appeared to be incorporated in the bridge itself, this seems to indicate they must have been built at the same time.

The Chapel, which was dedicated to Our Lady, St Mary, is mentioned in a deed dated as early as 1327, but no details seem to have been preserved as to the period it ought to be referred to, so the Chapel and arch could not be dated accurately. Its construction appears to be mediaeval although the bridge arch was not pointed.

There does not seem any doubt that this bridge is the same structure that existed in Thoresby’s time and which he described as “strong and robust, made of large squared stones and in the number of pillars and arches it maybe equalled by many and outdone by some.”

West Riding records of the 17th century show that the bridge was frequently repaired, sometimes at considerable expense. The earliest shows that in May 1641 £13.3s.8d (£13.18½p) to finish repairs to the bridge was passed to one Robert Benson an Alderman of Leeds.

During the years following this as much as £40 or £50 were often spent on repairs. There were very large sums of money in those days when a skilled Freemason‘s wages did not exceed one shilling (5p) a day.

In 1678 £55 was estimated to be required for repairs, but this sum was totally inadequate because in April 1679 it is recorded that the Surveyors of Leeds Bridge provided their accounts in court, subscribed by William Lowther, Walter Calverley, William Ellis, and Thomas Fairfax which showed they were out of pocket (over an above the £55 already granted) by the sum of £84 for the bridge repairs to the foundations, defects in several jowells not being discovered in an earlier survey; this led to extra money being paid to Alderman Hutchison and Mr. John Thoresby.

In 1796 the bridge was once again widened and repaired, this state of affairs seems to have carried on until 3 March 1871 when the Spring Quarter Sessions were held at Wakefield and the sum of £2,000 was granted towards the reconstruction of Leeds Bridge on the condition that the Corporation relieved the Riding of liability in respect of the bridge.

Up to 1818 when Wellington Bridge was built Leeds Bridge was the only dry crossing of the River Aire and in 1869 it was estimated that on each Saturday 4,000 vehicles and 55,000 foot passengers crossed Leeds Bridge in to Leeds.

The Committee of the Council which had charge of the reconstruction arrangements met on 11 April 1871 and recommended that the Council accept the Tender of Mr David Nichols to execute the work for £15,319.6s.0d (£15,319.30p). By May of that year all the old buildings had been removed and preliminary work for the construction of a new Leeds Bridge commenced.

I’ll tell you about the new Leeds Bridge next month.

One Reply to “Old Leeds Bridge”