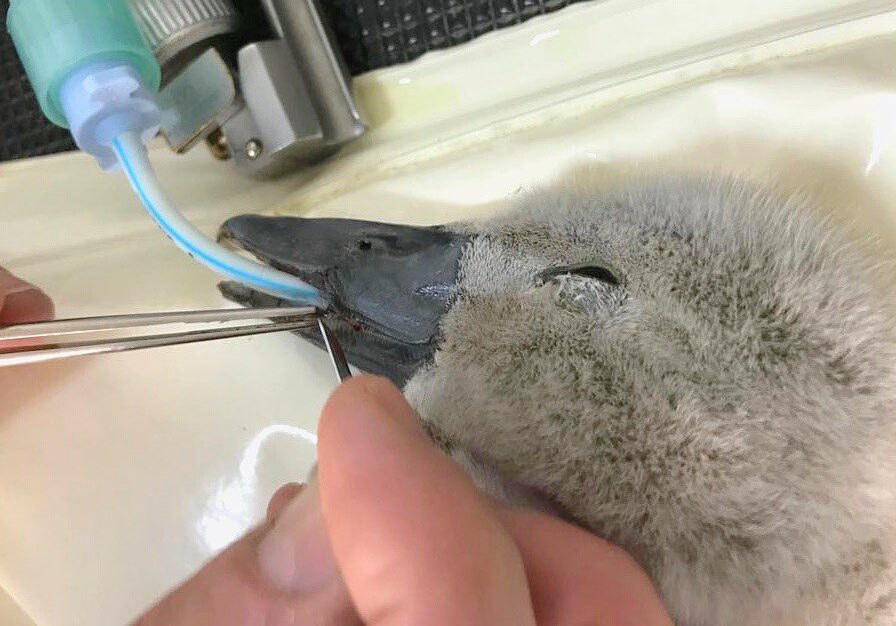 Local people have found themselves increasingly at loggerheads over the wellbeing of the much-loved family of swans, currently nesting in the Middleton Park lake – and whether their safety trumps the rights of those wanting to fish there.

As previously reported, the swans first made their home there – on the island in the lake, by the visitors centre – last year; they then returned this spring, this time building a nest for a new family. They are the first nesting family of swans there for over a generation, and have been a star attraction for those recently visiting the park.

However, this year has also seen record numbers of anglers fishing in the pond – often well over 10 at one time. And the past month has seen a growing problem with the swans and especially the six cygnets (the baby swans, now just over a month old) becoming dangerously entangled in fishing line. The lake is also home to moorhens, coots and ducks.

With these incidents happening nearly daily, and sometimes twice daily, the RSPCA and Yorkshire Swan Rescue Hospital (YSRH) have been repeatedly called out – and on other occasions, local people have themselves stepped in to rescue the swans. Others have – alongside the Council’s Parks team – taken to gathering discarded or broken fishing line and hooks from the lake before they cause a problem.

There are now growing calls to better manage angling on the lake, with proposals such as limiting the number of anglers, more licence checks, and creating a designated angling zone in the lake; but the Parks team insist they don’t have the capacity to take on this policing role, and other bodies including the Environment Agency have also seen significant funding cuts in the past decade.

With both the RSPCA and YSRH reportedly saying they are unable to continue coming out, unless substantial steps are taken to address the issue, a widely-shared online petition has now taken off calling for an actual ban on angling there – either temporarily during nesting season, or permanently.

Debating the issue on social media, comments include the following:

“If there were other types of anti-social behaviour happening, the Council wouldn’t be saying ‘Well, we’ll allow it, because there’s no way of policing it'” (Sarah).

“Anyone who’s a genuine angler has no problems with (the idea of a temporary ban): it will be the unlicensed youths that do this and harm the wildlife” (Claire).

“The pond is just far too small for all the fishing taking place: the wildlife have nowhere to go; at the end of the day, the pond is their home” (Danni).

But these proposals and allegations have inevitably caused uproar amongst local anglers. Also on social media, responses have included the following:

“Blown out of proportion; people have been fishing for 100 years there alongside ducks and swans, and this hasn’t happened before to my knowledge” (Simon).

“The park and the lake was left to the local folk; take away the fishing, and what next? The historic cafe, the golf house: all gone. Before you know it, there won’t be a park” (Alan).

“Here we go again: ban this, ban that, let’s put the kids back into the neighbourhoods causing issues. I have fished the place for over 30 years, and have been trying to get this issue resolved for over 2 and a half years now: there’s just been no maintenance. Until this pond is maintained properly, this issue will continue” (Chris).

“I’m hoping that everyone agrees that the wildlife must have a protected environment – and we all know that change is needed, and this must be done by looking for solutions and working together. We have a choice to manage fishing and wildlife, so are discussing a number of actions to pursue before progressing any temporary ban”.

Those and other proposals now emerging include:

To find out more or get involved, contact the local Parks team here.

Swans are a legally protected species – and the same law prohibits them from being moved from their natural habitat in most cases. Seasonable bans on fishing and other leisure activities are regularly put in place across the country, to protect birdlife. Angling is a licensed sport, overseen by the Environment Agency and the Angling Trust.

Photo: One of the cygnets receives surgery after injuring its beak on discarded fishing tackle