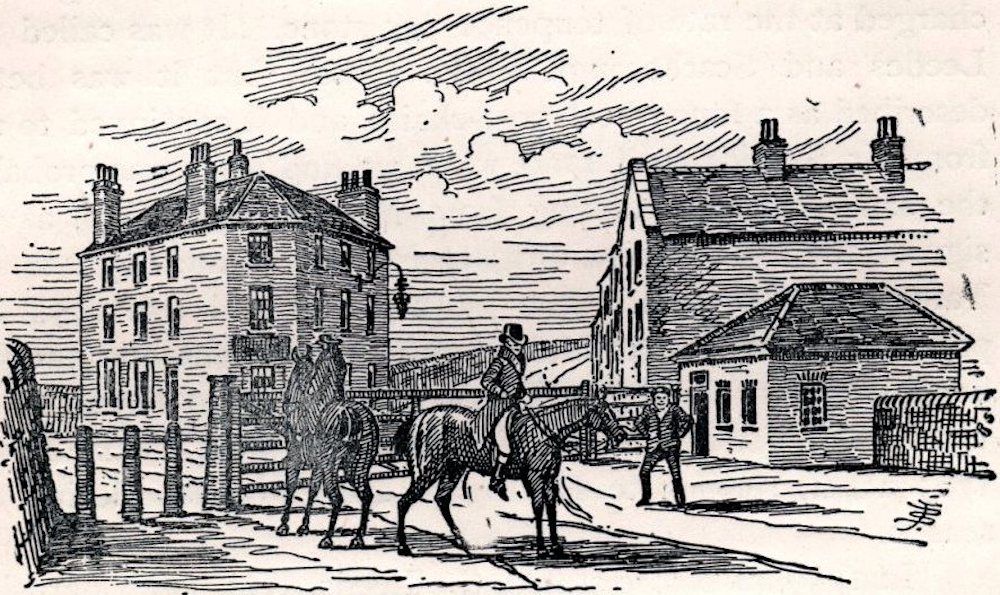 Prior to the passing of several local Turnpike Acts between 1740 and 1760 for the improvement of the highways, the roads around Leeds were in a deplorable condition, being nothing more in most cases than a narrow slip of rough flagstones leading across a common with deep ruts on either side.

Transport of raw wool and manufactured goods was carried out on the backs of single horses at the disadvantage of nearly two hundred to one compared with carriage by water. In the Winter season the manufacturers working life was interrupted by him making visits on horseback to distant markets in pursuit of trade, this meant travelling in darkness over rough roads and broken causeways presenting a field of action that was no less perilous than hedges and five-barred gates.

This brings us to an event in Leeds history which is marked by riot, disaster, and death. The real advent of coaching history here may be said to begin from this date.

The local authorities of several of the places surrounding Leeds at last became alive to the fact that the terrible roads were an impediment to both mercantile and social progress. Just as the ratepayers objected to the cost of keeping the roads in good repair, so too did the local users of the roads object to paying the tolls, the toll was a small tithe of what they would save on journey times and wear and tear on their horseflesh.

However, riot and carnage against the toll was taken up by gangs of armed men burning down the tollhouses and smashing the tollgates. A mob from Yeadon and Otley set out on a mission of destruction and demolished about a dozen Turnpikes. Even Officers of the Law assisted in the violence in some instances. At Selby the Public Bellman urged the townsfolk to take up axe and torch and destroy the offending gates, a bidding that they accomplished well.

In June 1753 a body of rioters armed with a wide variety of weapons marched from Leeds with the intension of destroying the newly erected Turnpike at Harewood Bridge and pull down his home but a message had been sent to Ganthorpe Hall to warn Edwin Lascelles of this. He assembled about 80 of his tenants and servants living on the Harewood Estate and with this small force he set off to confront some 300 rioters who were well armed with sword and clubs. Lascelles and his men took their place at the gate ready to receive the rioters. Several assaults were made by the marauders, all being repulsed and some thirty prisoners were taken, ten of these were sent to York Castle and the rest dispersed, many of these were wounded. However, the problem did not end with the Harewood Bridge fiasco.

The mob was aroused, they destroyed the Halton Dial toll bar, where the present day A63 Selby Road and the A64 York Road part company and the Beeston toll bar, this led to the problem reaching its culmination about week later.

Soldiers had been sent from York and were posted at different points in the disturbed districts and this led to three men being imprisoned for not paying the toll. A carter who refused to pay the toll at the Beeston Turnpike was seized by the soldiers, but he was then rescued by the populace before he could be conveyed before the Magistrates and Trustees of the Turnpike who met at the Old Kings Arms which was situated at the corner of Duncan Street and Briggate.

Boosted by their success the mob swore to rescue the other three prisoners before nightfall. It was about 7pm that a great crowd of rioters intent on releasing the prisoners assembled in Briggate in front of the Old Kings Arms and began throwing stones at the soldiers standing guard and breaking windows and shutters at the Inn, alarm quickly spread and shopkeepers and merchants hurriedly closed their business premises and efforts were made to disperse the mob but to no avail.

The Mayor was sent for and the Riot Act was read but this seemed to anger the crowd even more so the soldiers were ordered to fire a round, powder only, with the intension of frightening the crowd but instead it only created more anger. As a last resort the soldiers were ordered to load with ball shot and this led to between eight and ten rioters being shot dead and upwards of some forty being wounded, several dying of their wounds. This episode in our history was also known as the ‘Leeds Fight’.