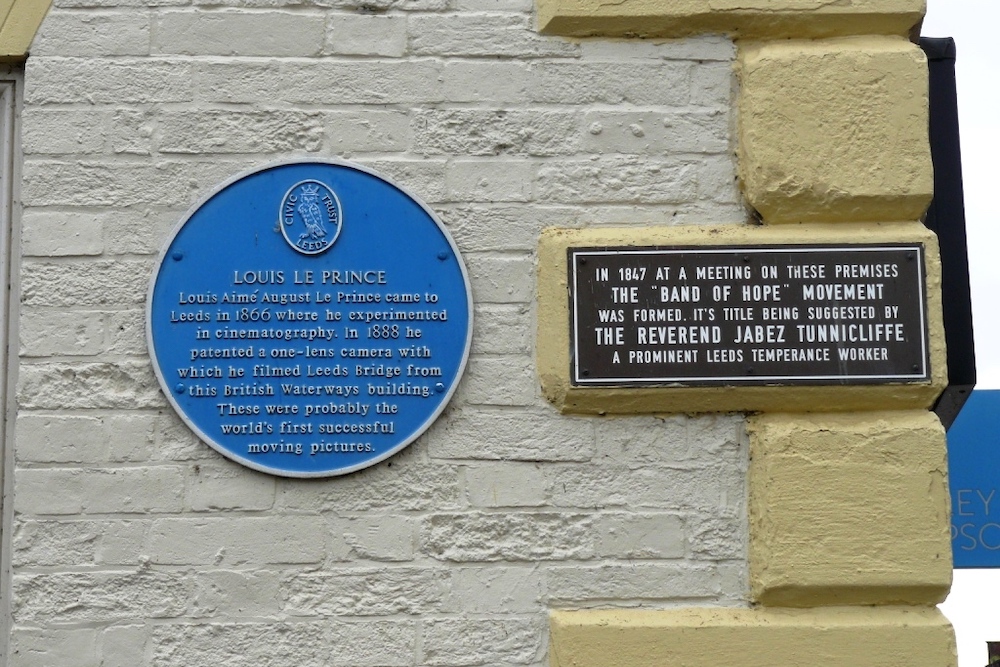 Last month we learned about the film pioneer Louis Le Prince, but another famous man lived at the house by Leeds Bridge.

Jabez Tunnicliff was born on 7 February 1809, his father John Tunnicliff had a family of 22 children and was by trade a boot and shoe maker in Wolverhampton. However, only Jabez and his older brother William along with six of their sisters survived into adulthood and he had scanty schooling.

At the age of 13 he was apprenticed to learn the trade of Japanning but he used this skill to support himself as a painter and decorator in some pastoral situations. While he was still serving his apprenticeship he secretly married Mary Ann, a young lady in the church that he attended.

Theirs was a good marriage, but their youth made it financially very difficult, and this also hindered his church work, although he did become a Sunday School teacher, and in the neighbouring villages he spent more time preaching the word of the Lord than attending to his trade of japanning.

He became a village preacher before he was 19 and was somewhat popular through his youth for his ready and lively utterances. He commenced his first regular ministrations at the Baptist Chapel at Shifnal in the County of Salop (now Shropshire), on 22 November 1829. He soon had a good Sunday School going and earned a name as a zealous preacher of the Gospel. However, he began to question the Calvinistic teachings, and left in November 1833. In December 1833 he and about 30 others began meeting and formed the Cradley Heath Baptist Church but while fundraising for the new building at Cradley Heath he was offered a new post.

In 1835 Tunnicliff was asked to become the Minister of the Longford Baptist Church this village was situated between Coventry and Bedworth in Warwickshire, he had a successful ministry here, and also preaching at branch churches at Bedworth and Stowe until 1842.

Jabez resigned his Pastorate with a view to going to working in America but instead he found himself employed by the General Baptist Home Mission Society to establish an interest in connection with that denomination in Leeds.

In 1843 he was firstly at the Stone Chapel before moving to Byron Street Chapel and it was at his Ministry here that he adopted teetotalism, he then became an earnest and very successful advocate of the Temperance Cause.

On 6 January 1845, aged 35, he was appointed Registrar of the Burmantofts Cemetery for the Unconsecrated section. He was described as a kindly bespectacled man with a Midland accent who carried the first burial in the Unconsecrated part of the cemetery on the day it opened.

It is said that Tunnicliff took up the Temperance Cause because in Leeds he came in contact with a young man who had been a Sunday School teacher, but had taken to drink on Sabbath outings and had brought himself, his wife, and children to ruin.

The adherents of Temperance tried to persuade others to sign the Pledge of Commitment, never to touch strong drink, Jabez Tunnicliff believed in catching them young. In the house by Leeds Bridge on that August morning in 1847 the idea of a Temperance Organisation for children was put forward with the title ‘The Band Of Hope.’

In this he was ably assisted by Ann Jane Carlile – an Irish Temperance Pioneer and Philanthropist and one of the first women in Britain and Ireland to become involved in the Temperance Movement, but that as they say is another story.
At the first meeting in November 1847 at the schoolroom of South Parade Baptist Church, Headingley, 200 children signed a simple promise to abstain from all intoxicating liquors: by the end of the year 1,000 had joined the movement.

Tunnicliff, a kind, sympathetic and cheerful man, convincing and charismatic in his preaching to adults, understood how to win the hearts of children. A quote attributed to him is as follows:

“Children are lost among great people … We bring them together, and make then see that they are the sum total of this society. It is their society. They speak, sing, clap their hands, and form the band, and great folks have nothing to do with it, except aid them.”

With his musical talent the minister enjoyed writing simple songs to catchy melodies:

“They soon learn the words, and go singing in companies in the schools, their houses, and in the streets. Thousands who never will listen to our speeches, hear our sentiments in the dongs of our children, and are struck, convinced, and converted to our principles”.

Sometimes the children brought their parents to Tunnicliff in the hope that they could be convinced to change their ways. In 1855 his Band of Hope became a national organisation called the United Kingdom Band Of Hope, this was formed to help local Temperance groups.

Jabez Tunnicliff was also one of the twenty-one Ministers who have served at the Hunslet Baptist Chapel (Tabernacle) in Low Road, Hunslet, along with Claude Wooster the joint founder of the Hunslet Boys Club.

Unfortunately for the Cause, at 2:45pm on Thursday 15 June 1865 Jabez Tunnicliff died. His funeral took place on Sunday 18 June at Burmantofts Cemetery and an estimated 15,000 people attended there. The Leeds Express for the 25 June 1865 reports that about 1,100 Temperance supporters walked through the town following the coffin. His grave stone can still be seen here.

There is no doubt that to some drink was a prosperous source of income, but in Tunnicliff’s time it was a major social evil. “Drink has done it all”, the Town Missionaries were able to demonstrate unemployment, broken relationships, sickness, and death.

In 1874 a meeting of the ‘women of Leeds, of all classes and denominations’ was held in the presence of the Lady Mayoress to organise a petition to the magistrates pleading for a reduction in the number of licensed premises in Leeds. At this time there were 1,067 such premises and a watch was kept on one of them during a Saturday from 7:30am until 11pm.

Fifty years later the Band of Hope numbered 3.5 million children and adults, Queen Victoria was its Jubilee Patron and it was part of Victorian Society and the Church.

The organisation Tunnicliff started still lives on, but in 1995 it changed its name from UK Band of Hope to Hope UK – inheriting 150 years of the tradition of putting children and young people first and encouraging them to “live life to the full”.

Hope UK is seeking to be at the cutting edge of alcohol and drug education, and harm prevention while developing new opportunities for young people.

One Reply to “Jabez Tunnicliff and The Band of Hope”