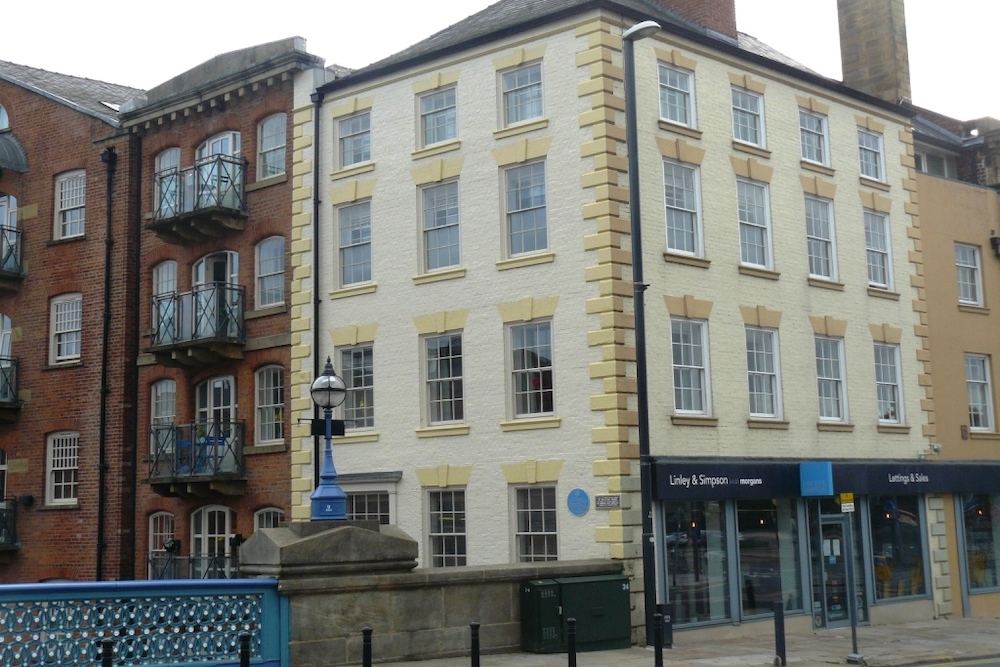 If you walk south from Lower Briggate to cross Leeds Bridge the first building to be seen on your left has two plaques on the north facing wall.

One of these, a Blue one to Louis le Prince who took the world’s first successful moving picture of traffic on Leeds Bridge from a second floor window in the Hicks building in October 1888.

I well remember this building as Hicks Ironmongers store with a kettle hung outside.

Le Prince was born on 28 August 1842 in Metz, Northern France. He was the son of a French Army officer who was a friend of the pioneer photographer Daguerre. He studied art in Paris and chemistry at Leipzig University, both provided academic knowledge that he was able to use in later times.

It was while at Leipzig he met and befriended John Whitley the eldest son of a Hunslet iron and bronze foundry owner, Joseph Whitley, who was enthusiastic about technical innovation.

1870 was a difficult year for Le Prince, he felt obliged to volunteer to take part in the defence of Paris against the Prussians. On his return to Leeds he started work as a draughtsman at the Whitley Foundry. After their marriage they first lived in Hunslet before moving to Brandon Villas, Chapeltown Road.

However, he and Lizzie had a dream and In 1874 the couple started a school of applied art, the Leeds Technical School of Art at 33 Park Square, this became renowned for its work in fixing colour photography onto metal and pottery. In 1875 two of their miniature portraits were chosen for presentation to the Duke of Edinburgh on the opening of the large Yorkshire Exhibition in Leeds, a royal commission followed. The Paris Exhibition in 1878 saw several of their works purchased for the National French Collection, and when Cleopatra’s needle was erected in London in the same year one of their Royal Portraits was among the selected objects buried beneath it in a bronze capsule casted at Whitley’s Foundry. As far as it is known this is still there.

Le Prince continued to experiment with new materials and techniques on photography and its commercial possibilities but money became tight and there were six children to support. In 1882 John Whitley persuaded the family to move to New York to join him in a new interior design business, when this failed Lizzie began teaching again while Louis worked at designing and building huge panoramic displays which were all the rage at this time.

He was convinced of the feasibility of taking and projecting moving images and worked with passion on his experiments. However, he was not alone, other inventors were at work on this potentially lucrative market and rivalry intensified. Friese-Greene and Wordswoth Donisthorpe were his nearest rivals and years in advance of the Lumière Brothers and W. Kennedy Dickson who did the moving image work for Edison.

In 1887 Louis decided to return to Leeds to work full-time on his project and with Joseph Whitley’s support set up a workshop at 160 Woodhouse Lane where with a devoted team, including his son Adolphe, he succeeded in developing a single-lens camera which he tried out in the Oakwood Grange garden on 14 October 1888 and filming traffic on Leeds Bridge. He also managed to obtain patents for projection methods and new forms of film.

The workshop was demolished about 1972 and the site later became the home of the BBC in Leeds and is now owned by the University of Leeds.

Le Prince was, in 1890, to go to New York for a long-planned Exhibition to show off his work but, before this he went to France on business and to visit his brother in Dijon. From here he boarded the 2:42pm train to Paris, his brother Albert waving him goodbye, but neither he or his luggage arrived there.

Several weeks were to pass and his family waited in vain in New York for his return; no body or luggage was ever found and the police were baffled. Was it suicide? Was it murder by rivals? Or just a disappearance? The mystery remains unsolved to this day, speculation is fed by the later death of his son, Adolphe in a mysterious shooting accident. Maybe the readers will have thoughts.

Seven years after his disappearance Edison with a team of ruthless lawyers dragged Le Prince’s name through the courts in a patent war that lasted a decade. Eventually the American courts acknowledged Edison as the inventor of motion pictures dismissing the validity of all Le Prince’s work!

2 Replies to “A house on Leeds Bridge”