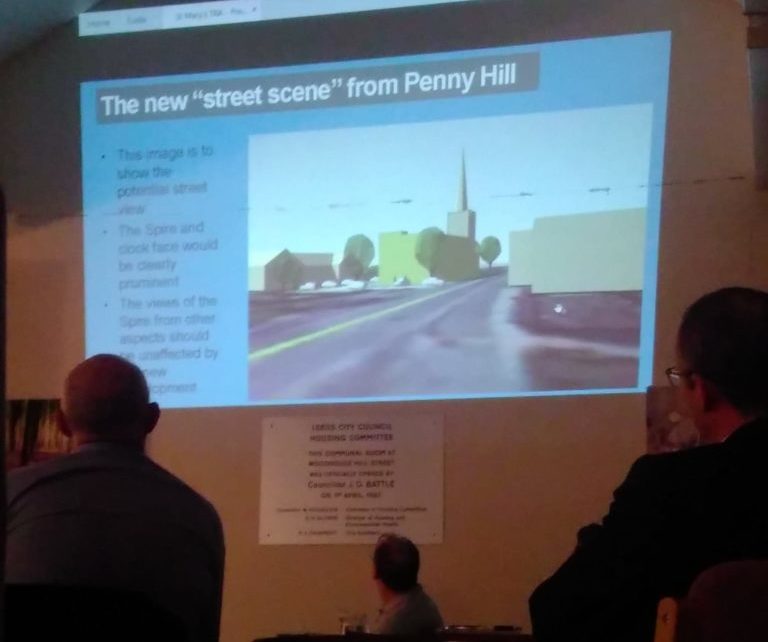 Hotly-anticipated proposals for a new local housing scheme were unveiled last night (Thursday 5 March 2020) at the Hunslet Carr Residents Association meeting – for the iconic St Mary’s spire site, in the heart of the community.

The site – on Church Street, opposite the Penny Hill Centre – has been the focus of considerable local interest and concern, since the 1970s church building was demolished last April. The much-loved and much-recognised Victorian spire – which is apparently the tallest steeple in Leeds, and Grade II listed – was left standing. But there has been uncertainty as to whether the spire – which needs refurbishing and maintaining – had a viable future, or would also ultimately also come down. Click here for more.

However, yesterday’s meeting saw a slew of representatives, including Leeds City Council officers and ward Councillors, local property developer Wilmott Dixon, an architect from Leeds-based Enjoy Design, and the Church of England, presenting their first draft plans for the project – and these were warmly received by local residents.

The partners are working together to draw up a scheme that would see a two- or three-storey block of flats, connected to the spire. Together, they stressed that their plans so far are very rough – and that any development would be sensitive to the history of the site, and the local community now. They are already working closely with the neighbouring St Mary’s CofE Academy, and there will be major community consultation throughout the duration of any project.

If the project goes ahead, these will be Council houses, and might well be subject to a Local Lettings Policy – for example, one that gave priority to older people, or local residents. A community space – that could double as a chapel – will also potentially be included in the scheme. The developers stated they would be happy to incorporate the cenotaph into the project, or see it moved; the clock would be restarted and probably automated, courtesy of funding from the councillors; and the smaller chiming bells that remain in the tower could potentially be set back to work too.

It was repeatedly pointed out that nothing was confirmed or guaranteed, and that ‘there’s a long way to go’, with many hoops to be jumped through. Light surveying might start on site in the coming months – then fuller plans will be available in the late summer or autumn. Watch this space.