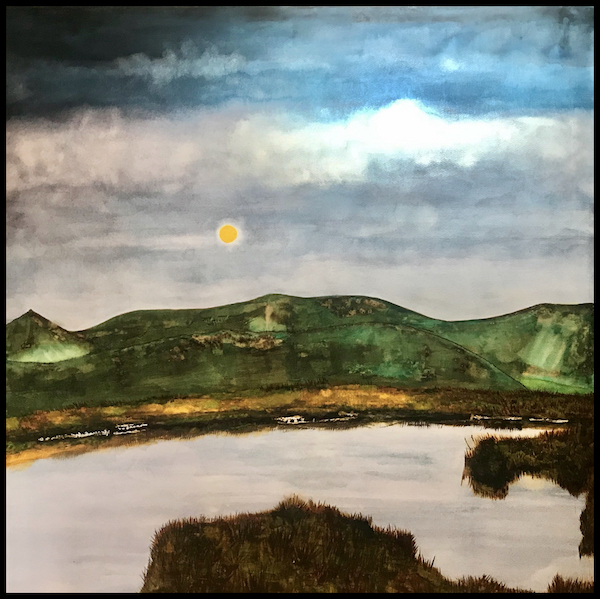 Before I ask what you actually see in this illustration of a near-metre square watercolour painting, it might be a good idea to give more details.

This high street isn’t like the high street you find in towns and cities. There isn’t a single shop in sight. No cars, just gently sloping, rolling hills leading to high ground and fantastic views before its steeper descent back to civilization. It’s the name of a walking route in The Lake District, which starts near Penrith and ends over twenty miles away in Ambleside. It’s said that the Romans used to use it to lessen the risk of ambush.

Red Crag Tarn’s about halfway along the walk and the painting is one I did from a pic I took on my smartphone when out with rucksack and boots. And I regret not having pitched my tent there to appreciate the location that little bit more. Never mind – apart from my lovely wife Janine and beloved dog Arnie greeting me in the morning, it’s hanging on our bedroom wall, to see each and every day.

And yes, it does have very special meaning for me. You see, I’m a fan of Alfred Wainwright’s writings and drawings of the Lakes. In one of his books you’ll find all the peaks shown in the painting named, and illustrated, all of which have been copied accurately. Another reason it’s so special to me is that it confirms getting to a place on your own steam and creating a picture of that place, because it’s so special. This is why I’m such a fan of someone who I think is the greatest landscape painter this country’s ever produced – JMW Turner. He got to so many places here, and abroad – by carriage, horse, and on foot. Through all weathers.

And I ought to confess – Turner had a habit of painting the sun where it would help the composition of the picture, not where it should be. I’ve tried to do the same in my painting, and it’s probably impossible for it ever to actually be where it’s been put. Appearances can be deceptive.

Car alarms in Aldi car park can often be heard going off from where we live in the Longroyds. But we’d never heard one as loud as the alarm going off, in our neighbour’s house opposite some time ago. It was so loud and penetrating it was like it was actually in our house, never mind the one across the street. With my next door neighbour, we went over to see if we could help.

She was almost out of her mind it was that loud, clearly distressed. I thought of turning the electric off but that didn’t make any difference, so we switched it back on again. The thing was that, being so loud it was really hard to pinpoint exactly where it was coming from. Eventually we thought it was coming from the cellar. The problem with that, though, was that the cellar was almost empty. We came away from the house feeling obliged to give up, only to find that living with the loudness was too much not to have another look.

What had happened was that a carbon monoxide detector had fallen behind a metal chest, snuck in a corner of the cellar. The alarm was due to the batteries in it running low, we thought – anyway, it stopped as soon as they were removed. Phew!

And I remember thinking just how ungrateful the lady of the house was because she didn’t even say thank you for all our efforts. That was a Wednesday.

Before I ask what you make from all of this it might be a good idea to provide more details. The Friday after, there was a knock on our door. It was the lady’s husband. He thanked me so much for my help. He explained that he was a lorry driver who works away, so wasn’t able to deal with it himself, that they’d just arrived from Sierra Leone and that his wife doesn’t yet speak any English. She does now, and we are good friends.

What I got from this was realising how so off the mark I was in thinking that she was ungrateful. I was going by what I thought I could make from her facial expressions, to decide what was actually going on inside her head.

I could not have been more wrong. I wonder how many times I (or we) misread people in this way? Appearances can be deceptive.

One Reply to “Here & There: Appearances can be deceptive”