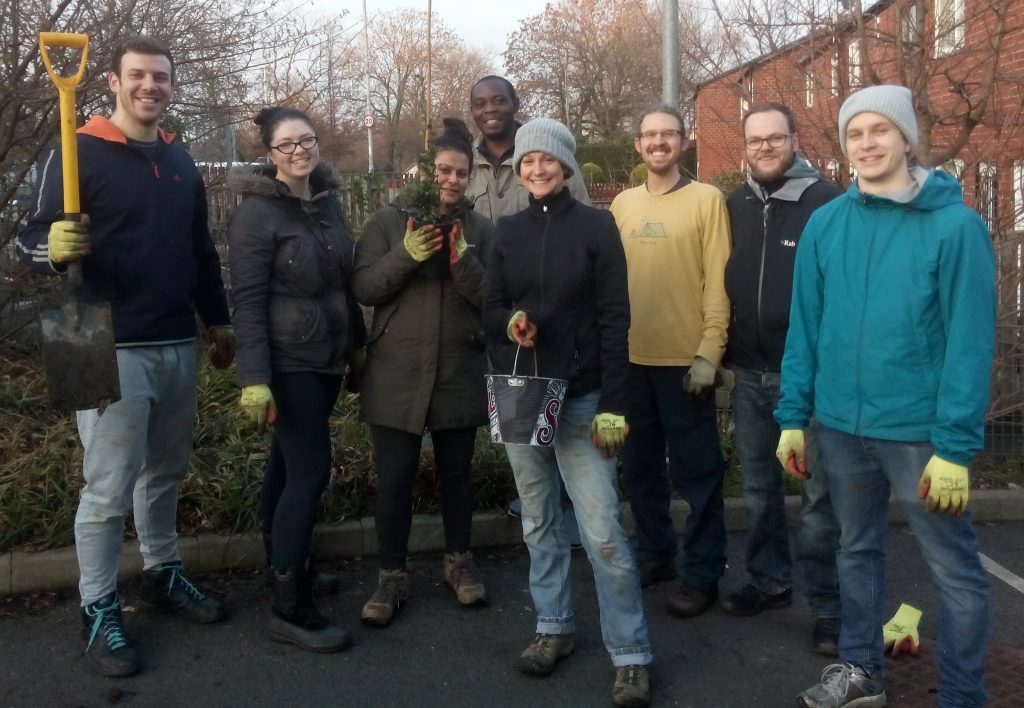 Residents of Greenhouse joined up with neighbours last Saturday (24 November 2018) to spend an afternoon planting 250 hedge-plants around the building. Greenhouse is the block of eco-flats and offices at the north end of Beeston Road that was previously Shaftesbury House.

With most of the countryside around Leeds being used for mono-cultural farming, Leeds itself is surprisingly important for the region’s biodiversity. At the same time, a lot of hedges around Holbeck and Hunslet Moor have been cut down recently because they’ve been attracting litter and anti-social behaviour, and a cash-strapped Council is struggling to look after them.

But Greenhouse’s residents decided that planting hedges along the inside of the building’s perimeter fence would actually increase security while also making the fence look nicer both from inside and out. They voted to pay for the plants themselves and chose mostly native, bird-friendly species like blackthorn, wild roses, bird-cherry, and hazel, which will offer colourful flowers and berries at different times of the year, along with food and habitat for birds.

Unsurprisingly, the people living in Greenhouse’s flats don’t generally own gardening tools, but neighbours from nearby and from the Lady Pit Lane allotments, where Greenhouse residents rent a plot, stepped in to lend equipment to the volunteers and to lend a hand with the planting.

At the moment there’s not a great deal to see, as the new plants are dormant for the winter, but we look forward to seeing new green shoots all around Greenhouse in the spring!

This post was written by Alaric Hall using our Create an article for South Leeds Life page.