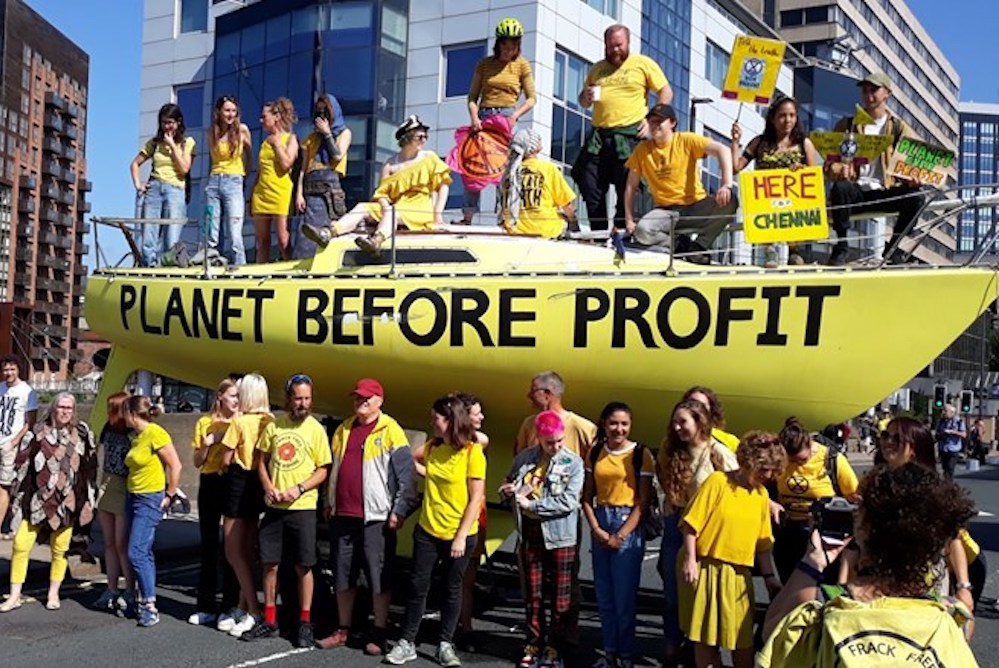 A prominent new feature of the climate change landscape has been the sudden emergence of Extinction Rebellion (XR).

This movement of climate campaigners formed here in the UK in 2018 and has now gone global. A volunteer-led network, it aims to build a shared sense of urgency about the climate crisis, amongst communities everywhere – and pressurise governments to take serious action on environmental issues.

Members of XR have particularly gained attention (and some would say, notoriety) for high-profile protests on bridges and main roads in cities across the world; most locally, they blocked Victoria Bridge by Bridgewater Place for five days in July 2019. The protest – and climate change itself – became one of the most discussed topics online and offline, in the local community at that time.

I spoke with two local members of XR, Luc Cockburn and Helen Hart – to find out more about the group, and what they hope to achieve through protests and demonstrations. Luc works in retail in town; Helen is self-employed.

Rebecca: What does XR want to achieve?

Luc: We want the government to make the climate emergency a priority, and focus on changing legislation and practices towards tackling it. We also want everyone to be aware of how this will affect their lives, and help them see that we can all be part of positive change.

Helen: Yes, and ultimately, we want what everyone wants: a safe world to live in, and to bring our children and grandchildren up in. A world where everyone can access and afford healthy food, clean water, and a safe warm place to live.
Rebecca: What kind of people are involved in XR?

Luc: All kinds of people. There’s a huge youth movement right now, which is fantastic because the kids will be running things some day! But also, there are also lots of older people who’ve been living sustainably for decades.

Helen: The people who are most active, attending meetings and going to protests, are either students and young people (perhaps because they realise that if they don’t act their future will be perilous), and people at or near retirement – who have more time, and aren’t worried about the impact of being involved on their jobs.

Luc: True – but also, people from all walks of life have been getting involved: donating, talking to their friends, family and colleagues. It’s not just about the people who have more free time to chain themselves to things! It’s about all of us: we all live on this planet, so it’s for all of us to protect it, because we’ll all suffer the effects of climate change.

Rebecca: Why do you do demonstrations that cause such disruption? Could you get attention in other ways?

Helen: Standing in the rain with placards is not the way I’d choose to spend my spare time, if I didn’t feel it was necessary. But climate change, and the devastating effects it will have on our lifestyles, will sadly cause so much more disruption than one of our demos could ever do.

Luc: These kind of protests, non-violent direct action, have proved very effective throughout history. Movements like the ones for women to get the vote, and for civil rights in the US: they caused disruption, to get attention. And we’ve achieved so much: it was the attention we drew to climate change that set the ball rolling towards the government declaring a climate emergency. The easiest option for people is to ignore the problem and carry on as normal – but we all need to be jolted and reminded that if we continue business as usual, the planet will be irreparably damaged.

Helen: Also, it’s worth adding, we live in a system that favours big business. Oil companies have known about the dangers of climate change for decades – but instead of looking to tackle it and find alternatives, they’ve funded misinformation. We’ve been forced to take direct action, to combat that. And I feel we may have a chance of turning things around.

Rebecca: Do you do more than just protest?

Luc: Absolutely! We’re all involved in loads of local action – for example, gardening and ‘rewilding’ schemes, and projects tackling waste food. A lot of us have day jobs which work towards a greener and more sustainable world too. I work in a zero-waste shop; another member does insulation work to make homes more warmer; and there are scientists and educators researching, and spreading the word.

Helen: Also, there are many XR members who aren’t comfortable with taking part in demonstrations, because of their jobs or caring responsibilities for example. But there are many ways to be involved: last summer, some of us attended local events like Breeze and Beeston Festival, and also the colleges, talking with people about the climate crisis.
We’re training up speakers to give presentations. It was a group from XR who presented the problem to Leeds City Council, who then declared a Climate Emergency. We’re organising tree planting around Leeds, including Beeston. There are over a dozen groups working on actions other than demos, but it’s only the demos that get the interest of the media.

Rebecca: Are you sure climate change is a big deal? How do you know?

Luc: The scientific evidence proving that there’s a climate emergency is overwhelming – human emissions of greenhouse gases have drastically altered the natural rhythms of our planet, and closely-monitored temperature statistics show an accelerating change. Meanwhile, worldwide flooding, fires, storms, and other natural disasters are happening with increased frequency. We really didn’t need to end up in this place, and we need to drastically alter our behaviour to avoid things getting worse in the future.

Helen: I’m the sort of person who has to find out for myself if something is true, so – after reading all sorts of articles – I did a couple of short online courses from Exeter University. I learnt the effect of releasing large amounts of extra CO2 into the atmosphere, on global temperatures, has been predicted since the late 1800s; and that global warming would have certain ‘fingerprints’ such as winters warming faster than summers (whereas if the warming was about heightened heat from the sun, warming would increase equally).

To be honest, I discovered things were even worse than I’d feared. And it’s not just a question of a few more storms and a few more floods: most of our food comes from low-lying farmlands, so climate change has huge implications for food security and cost.

Rebecca: If people want to find out more about climate change, or get involved locally in tackling it, what can I do or where can I go?

Luc: There’s more ways to get involved than ever! Sign up for updates and opportunities from XR at www.rebellion.earth, or find Leeds XR or other local environmental groups on social media. People are always welcome at the fortnightly Leeds XR meetings, there’s a local XR team who are happy to come give talks, or just drop us a line if you want to chat to someone about this stuff.

Also, find out when the City Council are holding public meetings, and go listen to others and voice your opinion. And starting at home is a great way of getting going: try cutting down single-use plastics; recycle more – terracycleuk .co.uk is great for finding places to recycle packaging that won’t go in your green bin). Ask around your school or workplace to see if anyone is like-minded and wants to start a group to make improvements within the organisation: for example, sourcing supplies from greener brands, or starting a carpool.

Rebecca: Is there anything else you want to say?

Helen: The fact that something has to be done to prevent a climate crisis turning into a climate disaster is clear. The sooner our government acknowledges the severity and acts, the less drastic the changes will have to be.

Luc: And we don’t need a few people living 100% perfectly green lives; we need everyone to make the changes that they can, because it all adds up. Thanks!