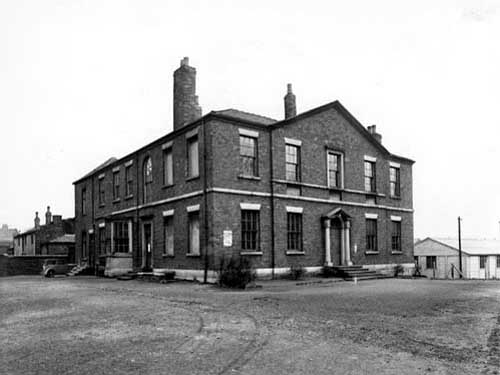 Burton Lodge was built around 1791 and was a fine Georgian Mansion of two story red brick construction. At some point the Lodge seems to have been split in to two houses, this led to a change in the name and also the address from 1861, it now became Nos.13 and 15 Brewery Place, Burton House.

Antonio had a son, Joachim Antonio Augustinho de Macedo, he was also a wine merchant but, he also had a second interest that of Portuguese Vice-Consul in Leeds. Both the Macedo’s were living in Burton House at this time. Joachim had a son, Joaquim Agostino de Macedo, who once again was a wine merchant but his other interest was that of being a 2nd Lieutenant in the Leeds Rifles. One of Macedo’s daughters, Florinda, married Francis Taffe an Irishman and they went to live in Ireland.

In 1900 there was a Conservatory and a Victorian extension to the building. In the Conservatory plants were in tiers and a vine had been trained to grow right across the roof. The last known occupants of Burton House before it was purchased by Leeds City Council in 1919 was a family reported to be Robert and Suzanne Lawson.

The reason the Council purchased Burton House was to provide an annexe for Hunslet Moor School, later this was to become the Sixth Form of Cockburn School, this School had opened in 1902 as the Southern Higher Grade School and was the last School Board School to open, it was renamed Cockburn in 1904 after the former Chairman of the Leeds School Board.

In the 1950s there were temporary buildings to the right of the House, these were the Dining Halls, these were used by Hunslet Moor School and is thought probably by Rowland Road School as well. The School tennis courts as well as the School sports ground along with long jump and high jump facilities were behind the Dining Halls.

In 1986 Cockburn School was closed and moved to Gypsy Lane, Parkside School. It was at this time that Bellway Homes secured an Urban Development Grant of £273,000 for conversion of Burton House into ten flats (1 to 10 Burton House) with plans for a further twenty-eight to be built on the adjoining land, the conversion of the House was completed in October 1986. One of the tenants of a ground floor flat is said to have renovated it back to the original ceilings, the flat being the classroom they had used while at Hunslet Moor School.