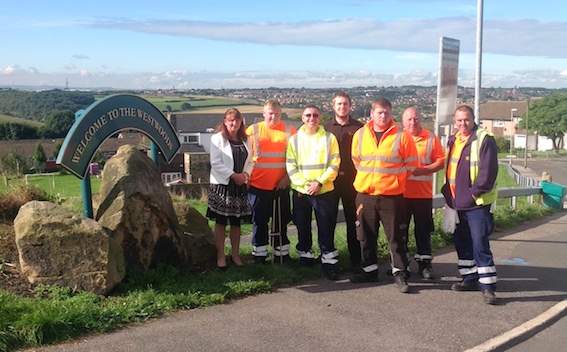 Belle Isle and Middleton have both seen vast improvements in their environment according to local Councillors Kim Groves, Judith Blake and Paul Truswell.

Councillor Groves recently went to meet the locality team responsible for the transformation to thank them personally for the difference they have made to the area, which has resulted in a massive reduction in the number of complaints received.

The area has seen a reduction in litter, dog fouling and fly-tipping and this has been due to the dedication of the team but also improved partnership working with local residents, businesses and schools with everyone getting involved in cleaning up Belle Isle and Middleton.

Councillor Groves highlights that there is still work to be done with specific issues around privately owned land and ensuring problems continue to be reported but the improvements that have been seen so far are fantastic.

“It is fantastic to see just what a difference has been made to the local area in a relatively short period of time. The Locality Team have been fantastic and not only have they been dealing with issues that are already in existence but they have been pro-active in working with local residents, schools and businesses to help get the message across.

“We have seen such a huge reduction in the number of complaints that we thought the phones lines had gone down! I just want to pass on my thanks and that of my ward colleagues to the whole team and the partners we have been working with to achieve this. A big thank you is also due to the residents of Belle Isle and Middleton for the pride they are taking in their area and the improvements everyone is benefitting from.”

One Reply to “Belle Isle and Middleton clean up”