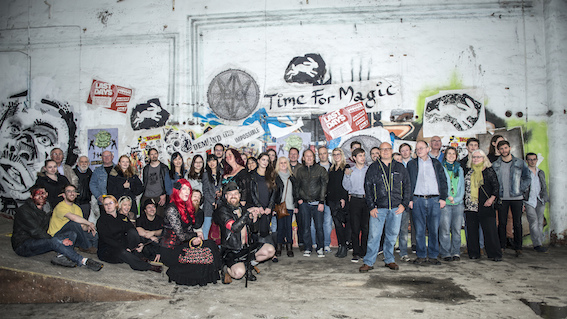 The pioneering and much-loved Temple Works cultural project, templeworksleeds.com, in Holbeck is this month shutting up shop at the iconic old flax mill where they’ve been based for the past 6 years. As previously reported on South Leeds Life, major manufacturers Burberry are now looking to move onto the site.

The Temple Works building itself is a unique, Grade 1 listed Victorian flax mill, an internationally recognised architectural masterpiece, 14 acres in total and centred around a 2 acre main hall that was for many decades the largest single room in the world. But it fell into disuse during the last century, until the current owners – international property tycoons, the Barclay brothers – invited regeneration company Cornerstone Strategies to come in to develop the site into a major cultural venue on the scale of London’s Tate Modern. So the Temple Works project was conceived, in 2008 – and launched to the public the following year.

The project has flourished in many ways since then – but not at all according to plan. The recession from 2008 put significant limits on its scope, and a structural failure at the same time left the huge main hall largely unusable. And the infrastructure has always been incredibly slim: there’s limited power, no heating, and just one public toilet! But not held back by these considerable hurdles, the project has taken off in other ways.

Dozens of artists, musicians and craftspeople (50+ at any one time) have made their home on site, bringing life back to the building. An ongoing educational and heritage programme unfolded, featuring dozens of open days and more. The site became a sought-after location to hire, with film and TV companies in there most weeks. And the site became an acclaimed events space, with gigs, festivals, light shows, exhibitions, and more throughout the year. In total, over 100,000 people have visited since 2009.

“We’ve not been forced to leave: the situation with Burberry isn’t yet confirmed. But we decided this was the best time for us to beat a retreat, Dunkirk-style! It is of course devastating. It’s been an amazing project, in an amazing space. Many of the artists have said that their work’s been hugely influenced being in such an extraordinary site. And together, we’ve developed a really collaborative ethos, generating new business, new concepts, new projects. Everyone here works very hard to make a living, so it’s a huge disappointment having to move on.

“But people are pulling together, networking, finding new spaces together. Leeds City Council are supporting us to move out, and to find short-term solutions. So, whilst nothing will match the unique Temple Works site, the project itself isn’t dead: it’s evolving, and the work and the relationships will continue. Who knows what next?”

Plans are forming for a major celebration event of all things Temple Works, in May or June. This will be an all-age, multi-media event somewhere in central Leeds. Watch this space.

And in the meantime, to grab yourself a piece of the Temple Works story, the project are currently looking to sell much of their furniture: contact them via the website templeworksleeds.com to find out more.