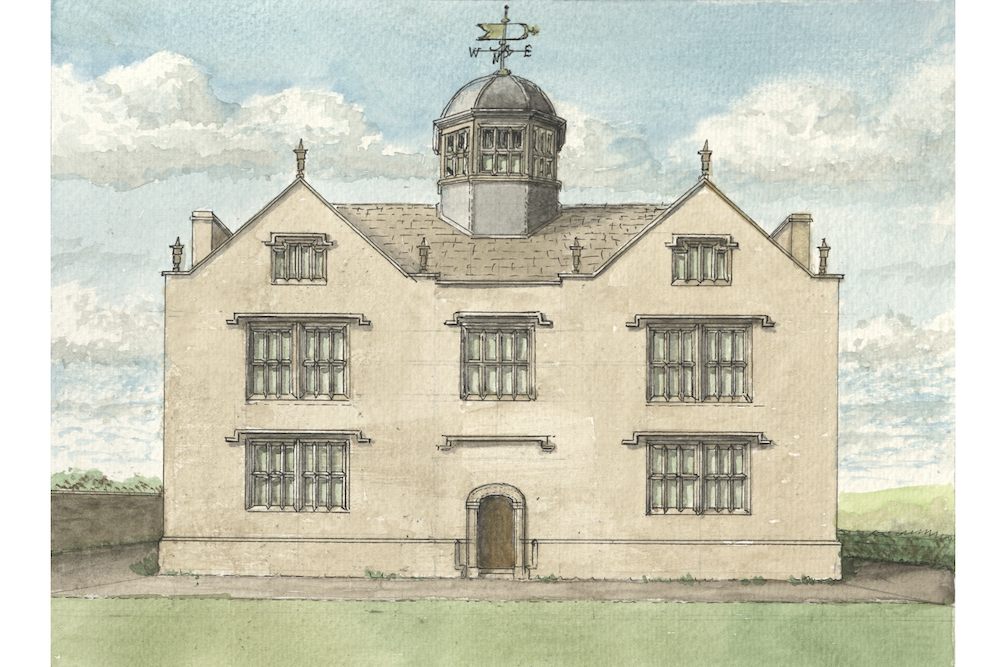 On the last day of November 2022 I attended a brilliant history lecture given by Steven Burt at the Leeds City Museum on the lost houses and heritage of Hunslet.

It was brilliant because of the amount of his research producing so many photographs of mansion houses, portraits of their owners and wives, and maps and plans of their estates. In the Sixteenth Century Hunslet was the most desirable place for the very rich to live. It was then entirely rural with plenty of open land for their country parks with an unpolluted river for recreation.

Most Hunslet people will have heard of Hunslet Hall the first of its mansions, but none apart from the very elderly will have seen it. It was situated where the Salvation Army is now on what is now called Hunslet Hall Road.

It was demolished by Leeds Corporation in 1933. There are no drawings or photographs of it. Peter Brears, a friend of Steven, provided a drawing of a typical Tudor house of the time with a central door with double mullioned windows each side. A remarkable feature was a Prospect Room – a large turret with windows to enable the family and guests to survey and admire the surrounding park and countryside.

Hunslet Hall was occupied by the Neville Family (related to the Middleham and Raby Nevilles) until its fifth generation when John Neville in 1569 joined the “Rising of the North”, a movement to overthrow Protestant Elizabeth I and replace her with Catholic Mary Queen of Scots. His wife Lady Neville begged and pleaded with him not to do so but headstrong John would not listen. The coup failed and Elizabeth’s retribution was swift and terrible. Eight hundred were arrested and executed and their lands and property confiscated.

John escaped firstly to Scotland and then to the Continent. Lady Neville and her ten children were turned out of Hunslet Hall and were homeless and destitute. Lady Neville eventually joined her husband in Flanders. Hunslet Hall was sold and most of its land was divided into thirty plots initially for tenant farming.

Eventually, there were twenty-four mansions in Hunslet mostly owned by mill owners and cloth manufacturers in the 17th, 18th and early 19th centuries. The navigable River Aire which flows into the Humber with its many tributaries, allowed export to other parts of the Country and to the Continent with cloth made from wool, then cotton and then flax making their owners very wealthy. We were shown photographs of nearly all of the mansions with plans of their surrounding parks and portraits of their owners and family members.

There were three mansions which stood out for me because of anecdotes associated with them. Firstly, Sundial House on Hunslet Lane of which we were shown drawings by Peter Brears based on photographs before its demolition in the 1950s. For many years it was the home of the Goodman family who were so wealthy that they built a ballroom extension!

Secondly, Leathley Lodge at the end of Leathley Lane with its extensive grounds. The Tsar of Russia stayed there in 1816. Thirdly, Brookfield House on Hunslet Road owned by the Ingham family. Benjamin Ingham travelled to Sicily in 1806 where he discovered Marsala wine and he went into the production and exporting of it which made him extremely wealthy.

He paid for half of the cost of building St Mary the Virgin Church of which its iconic and much-loved spire, the highest in Leeds, remains.

In the latter half of the Nineteenth Century, the resident cloth mill owners were replaced by the owners of foundries, coal mines, smelting, engineering (primarily steam engines), glass works, potteries and breweries. At the same time, developers were building poor quality houses on the rural land for the new workforce in back-to-back terraces – not the back-to-back houses we know today in blocks of eight with toilet yards in between, but long streets with toilets at the end.

The noise of manufacture and the pollution from coal-fired furnaces to drive machinery together with the hundreds of domestic coal fires was intolerable to previous mansion owners who moved to the more salubrious parts of north Leeds. Their mansions were either converted into manufacturing establishments like Sundial House or fell into dilapidation or ruin.

For workers and their families life was hell. Their houses were one up one down types, with no sanitation. If they did not die from the processes of manufacture and air pollution, disease was rife with overcrowding and close proximity to neighbours.

Neville Chamberlain, who was the Chairman of the Government’s Unhealthy Areas Committee, wrote in 1921:

“The City of Leeds is, perhaps confronted with the most difficult problem to be found in any of the provincial towns owing to the enormous number of back-to-back houses. There are 72,000 of which 33,000 are the oldest and worst …”

Clearance of slum houses was difficult and slow, mainly due to lack of alternative accommodation, but also as Leeds landlords objected to it. In 1930 wholesale demolition of unfit housing along Hunslet Road and Low Road did take place but this was due to road widening.

Of course, World War II held up slum clearance and it was not until the 1950s that the worst of Hunslet’s houses were cleared.

If there happened to be a dilapidated mansion house in the middle of the area that was cleared too. Out of the 24 mansion houses in Hunslet there is just one left – Burton House on Burton Road, a splendid early Georgian House owned by the Busk family.

As a former councillor I always argued that to preserve historic buildings they must have another use or they deteriorate further and can be a target for vandals. Burton House is a prime example of another use. In 1919 the Leeds Corporation bought Burton House to extend the adjacent Cockburn School and we were shown a slide of children in the playground there. In 1981 it was acquired by Bellway Homes and converted into residential flats. It is good to know that Burton House once more has people living in it.

Much more information can be obtained from “The Remarkable Story of Hunslet” a beautifully illustrated book written by Steven Burt and edited by Kevin Grady and is well worth a read.

Is Hunslet today a desirable place to live? Steven Burt asked Hunslet residents if this were the case and was given a resounding “Yes”.

Steven Burt thanked the Leeds Philosophical & Literary Society for financial help with the book’s publication. Without that grant the book would not have been published.

This post was written by Hon Ald Elizabeth Nash

Main image: A drawing of what Hunslet Hall may have looked like by Peter Brears

3 Replies to “The lost houses of Hunslet”