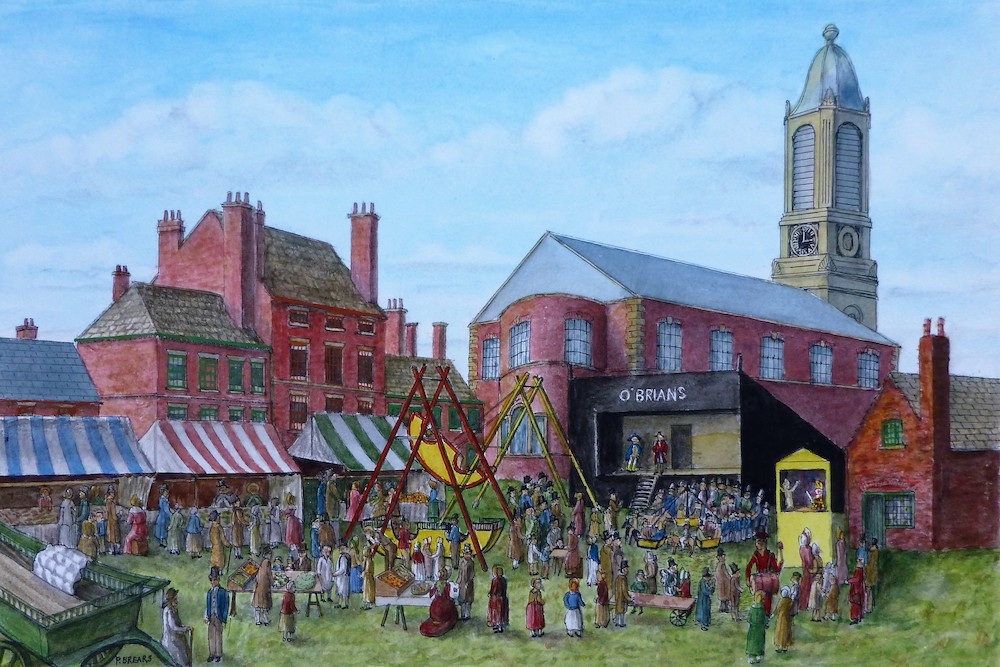 Two of Leeds’ most well-known historians have teamed up again to produce a fascinating history of Hunslet – Leeds’ most famous industrial suburb.

Best known for their ground-breaking ‘Illustrated History of Leeds’, written in the 1990s, in the last decade they have turned their attention to telling the story of Hunslet. With Steven Burt as the principal author and Kevin Grady as the editor and subsidiary author, ‘The Remarkable Story of Hunslet’ at 350 pages with over 250 illustrations is easily the most comprehensive history yet written of any Leeds suburb.

It traces the history of Hunslet from its first mention in the Domesday Book of 1086 up to the present day. It is lavishly illustrated throughout with maps, paintings and photographs and describes the economic and social history of the township from humble beginnings to becoming the great industrial powerhouse of the Victorian period and beyond.

It describes the lives of Hunslet’s people – life in the back-to-back streets, their churches and chapels, their schools, the pubs and shops, the sporting clubs, cinemas, and major annual events such as the Hunslet Feast. As well, it tells the story of the development Hunslet’s roads and railways, and its great industries ranging from the handicraft woollen cloth making industry and coal mining in the seventeenth and eighteenth centuries to the development of the textile mills, iron and steel works, potteries, glassworks, chemical works, and the great steam locomotive, chemical, printing and engineering works in the nineteenth and twentieth centuries.

“The story of Hunslet is truly remarkable. It grew from being an agricultural manor and township on the edge of Leeds in the Middle Ages to becoming the industrial powerhouse of the city in the nineteenth century.

“It engineering products including steam locomotives, traction engines, steam ploughs, pumping engines and coal-cutting equipment, and machinery of all sorts were exported all over the world. In addition, it was famous for woollen cloth production, flax spinning, glass making, its chemical works, production of iron and steel, nail making, production of gas holders, and much more.”

The book highlights some of Hunslet’s most dramatic events and controversies including the arrival of the Middleton Railway, the Cholera epidemic of 1849, the battle to save Hunslet Moor, and its great contribution to winning two world wars. In more modern times, it recounts the disastrous building in the 1960s and the subsequent demolition of the notorious Leek Street Flats, and the slicing of Hunslet in half in the early 1970s by the driving of the M1 motorway, through it, and the subsequent efforts of Leeds City Council and Leeds Development Corporation to remedy the damage wreaked on the community by the ill-thought-out slum clearances and road building.

The book concludes by looking at Hunslet today, and the challenges its faces and the opportunities for its continued renewal; it discusses present-day problems of high levels of deprivation, poor health and housing, whilst celebrating Hunslet’s vibrant modern industry and the impressive regeneration projects which are transforming Hunslet’s waterfront area.

“This book is a simply magnificent achievement. Immensely readable and engaging, Steven Burt and Kevin Grady chronicle with great skill and beautiful illustrations and pictures the history and development of this historic part of the city of Leeds.

“From Hunslet’s earliest appearance – in the Domesday Book – through its golden age of engineering making wonderful steam locomotives, its sporting prowess, politics and new housing to the huge changes that the modern era has brought, readers will learn something new and interesting as they turn each page. And above all, it is a story about the people who made this extraordinary place.”

The book, priced £20, can be purchased from: