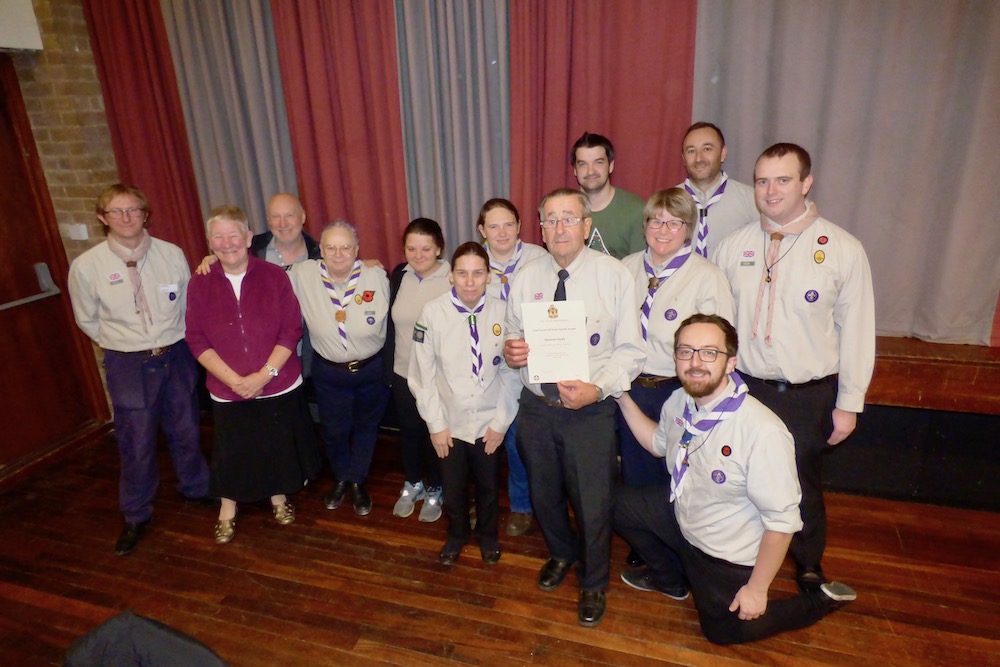 Scouting has been a major part of Raymond Harley’s life and on Wednesday (4 December 2019) he was honoured for his fifty years of service to Scouting.

The special award was made at the South Leeds and Morley (SLAM) Carol concert, held at St Andrew’s Church on Old Lane in Beeston.

Raymond is known to many families in the area having led Cub and Scout Groups at St Matthew’s in Holbeck, Wesley Street Methodist Church in Beeston and now at St Andrew’s with the 1st South Leeds & Morley Scout Group.

As a boy Raymond was involved as a cub and a scout, joining the cubs in 1947. He became a Assistant Scout Leader in February 1960 at St Matthew’s church in Holbeck. He took a break when he got married, but brought his son to cubs once he was old enough.

As a parent with scouting experience he was asked to help out, which he did. Then when the Cubs leader left he was asked to step up and lead the pack as ‘Akela.’ He has remained a leader ever since. Now 79, he still helps with the scout group at St Andrew’s in Beeston.

The award was presented by the new District Commissioner Gareth Luby, who recalled taking part in a camping competition when Raymond was one of the judges. Raymond received a standing ovation from all the Beavers, Cubs, Scouts, Explorers and their families, together with a rousing “BRAVO.”

One Reply to “Scouting leader honoured for 50 years service”