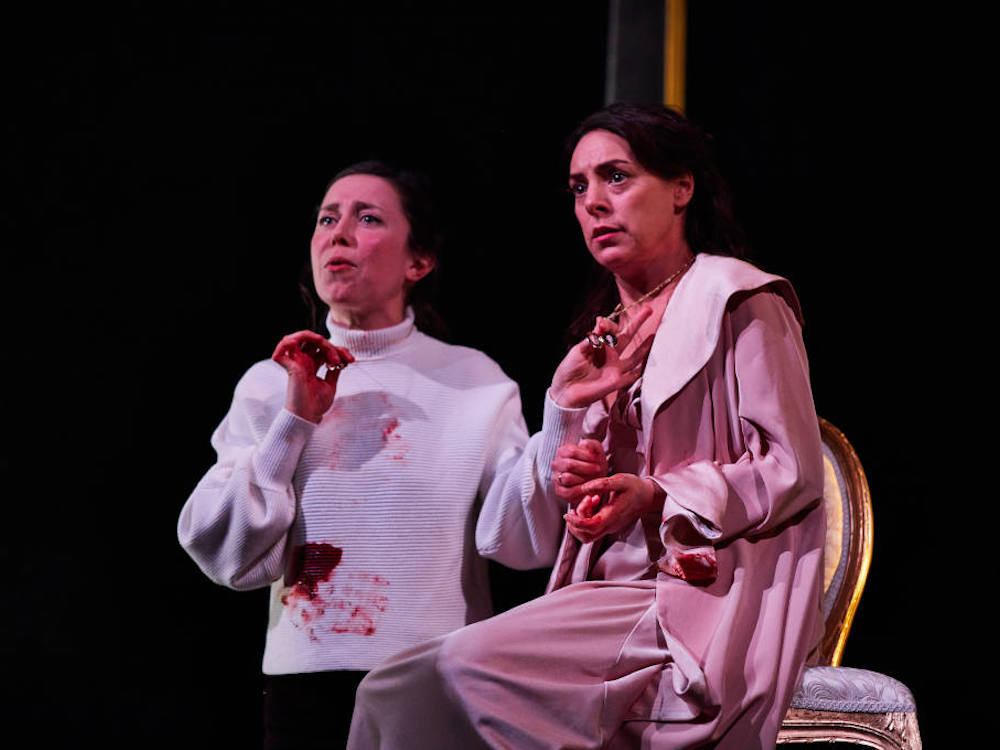 It had been a while since I watched an entire Shakespeare play, and I’d never seen Hamlet before so I was curious to see a modern take on this classic tragedy. The Leeds Playhouse Pop-up theatre has the intriguing atmosphere of an arena in  stripped-down form which provides a terrific blank canvas for the play. Faced with that, the set design didn’t have anything to fight with; it was able to hold up the action without distraction.

I’d worried the dialogue might be in Shakespearean English and that my long distant school readings were too far in the past to be useful. However, it’s a familiar tale so I decided to just go with the flow.

We took our seats in front of an imposing stage that felt huge and dominated the arena with its intense darkness. Tall mast structures reached up from the stage, framing the space. The atmosphere crackled with intent.

As the performance began, we saw Hamlet fencing alone before the arrival of Horatio. Two key characters, both female, playing at sword-fighting, so far, so new. The decision to cast female actors into traditionally male parts was provocative and stimulating. It both enhanced and challenged the accepted power structure and dynamics between the various characters. If I said it didn’t matter that Hamlet was played by a woman, it would only be to emphasise that a talented actress can bring out a richness and subtlety to the part of the doomed Prince. It breathed freshness into tradition without missing a beat of the play’s rhythm.

The script was indeed Shakespearean English, so it took a moment for my ears to adjust but honestly it was no impediment to understanding the play in every respect. The action scenes fizzed with excitement, and were well balanced with the more sombre soliloquies. This was a confident and thrilling ride across a range of emotions.

I finally understood why Hamlet has the reputation it does and why actors regard it as a test of their expertise. For one play to encompass tragedy, humour, treachery, romance and doom without diluting any of them is quite a feat; to produce such a play so skilfully is an achievement. In an age when many of us struggle with a decreasing attention span I was delighted with a production that kept my attention right the way through. Not once did I feel the need to check my phone or find my attention wandering, I was gripped!

To conclude: this is a stunning production, it doesn’t matter if you’ve never seen any Shakespeare, and there’s plenty of new perspectives to engage an enthusiast.