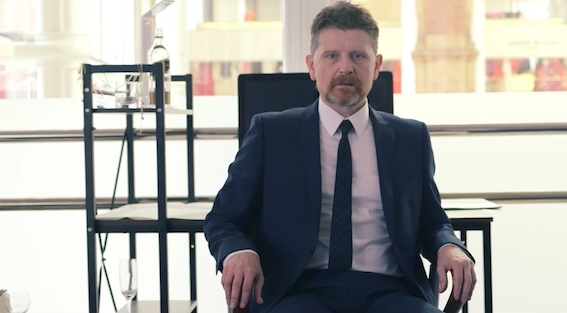 Zinnie Harris’ reworking of the Ibsen classic The Master Builder is very much a play of two halves. One works, the other doesn’t.

It has to be said that Ibsen’s original is unpromising material. First, there’s the mystery of what it’s about. Successful architect Halvard Solness is on the brink of career triumph when much younger blast-from-the-past Hilde Wangel rocks up.

Everything then goes fatally pear-shaped, but for no convincing reason. It’s supposed to be a ‘psychological’ play but Ibsen’s grasp of psychology was – not unreasonably for 1893 – somewhat imperfect.

Then there’s the implausible ending. Holness falls to his death from a tower he’s just built, in a mishap so contrived it should be grounds for a refund. (Early audiences panned the play – a warning sign posterity should perhaps have taken more seriously.)

Can Zinnie Harris fix it? No she can’t.

The first act is good, fast, easy to follow, funny and (be advised) sweary. It’s a stretch to believe that a major architectural practice in 2017 comprises only four people, but let that pass. It does an efficient job of setting up the characters, the mood and the play’s pivotal event – the disruptive arrival of Hilde (Katherine Rose Morley).

The second act is a different animal entirely. It plunges almost immediately into a witch-hunt, as allegations emerge that Holness has a history of sexually molesting underage girls. The evidence goes unexamined but the condemnation is immediate and merciless.

Ibsen blurred the line between real and supernatural, so in the Harris version are these actual or imagined chickens coming home to roost? Should we side with a bewildered, panicked Holness or with former friends and associates who at the drop of a hat chorus ‘Kiddy fiddler!’ and demand that he jump to his death?

I for one didn’t know and quickly didn’t care. The abrupt and clumsy transition to flat-out ugly was disengaging and undid all the play’s earlier good work. It was overwrought, emotionally manipulative and almost absurd in its simplistic gallop to the big finish, the ‘fall’.

Worse, perhaps, is that it presumed to draw from the well of Jimmy Savile, Rolf Harris, Rotherham and the rest but came up with a near-empty bucket. If you’re going to address child sexual exploitation in drama, tackle it head on. Don’t dress it up as Ibsen.

Undeniably, Reece Dinsdale is excellent as Holness and well worth seeing. He’s convincing, funny and likeable as a dynamic and shrewd (rather than ruthless) boss starting to feel his age and his limitations. He deserves better than a second act that gives him little to do except twist and turn in a tornado of vilification.

Afterwards, mulling over what I’d seen, one expression kept recurring: ‘cut and shut’, motor trade jargon for a dodgy vehicle assembled from the front and rear halves of two write-offs. It might seem an unkind verdict but it fits the bill here.

This review was written by Graham Barker as part of our South Leeds Goes To The Playhouse project where readers receive free tickets in return for a review article.

2 Replies to “Review: (the fall of) The Master Builder”