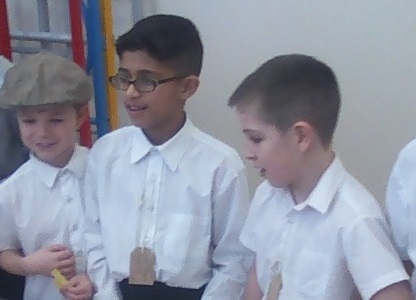 On Thursday 4 January 2018, children, parents, carers and teachers at Hugh Gaitskell Primary School in Beeston took part in an exciting end of Autumn term showcase, where children’s work was highly celebrated and praised. We all stepped back in time to World War II Britain, dressing up as characters from that period in history. 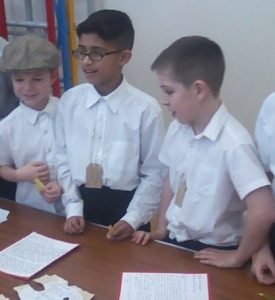 During the autumn term children in Years 5 and 6 were studying WWII and its impact on our present history. Children investigated the start of the war, the Dunkirk rescue, the Battle of Britain, the D-day landings and finally the end of the war, all from a child’s perspective. Children found out what it would have been like to be an evacuee during World War II. They learned the reasons why evacuation happened and where children were sent to live.

Also, they discovered what children had to pack and how they prepared for life as an evacuee. We all explored their experiences during their evacuation and their return. Pupils have gained a good understanding of how the rationing of food, the need to Dig for Victory and the directive to ‘make do and mend’ impacted on children and their families during the war.

Parents had a chance to look at their children’s art work produced with a use of charcoal and their extended pieces of writing.

Our drama teacher Luke helped to organise a 15 minute performance, in which our talented children demonstrated their acting skills, pretending to be evacuees from London.

Our showcase was a tremendous success with a fantastic attendance from parents and carers. Just to quote a few of them:

Rhuksana Ali, Amani’s mum said, “I really enjoyed the splay, it was brilliant.”

Filip Pieczarka’s mum, Aleksandra, said, “Children looked great in their outfits. They, and their teachers, have put so much effort in this event!”

We really appreciate your continuous support.

This post was written by Jacquie Padgett using our Create an article for South Leeds Life page.