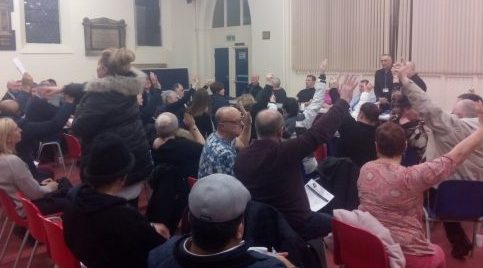 100+ Holbeck residents gathered again this week (Tuesday 16 January 2018) with Council and Police officials, and others – for another heated community forum about the ‘Managed Zone’ (also known as the Managed Approach’). This controversial scheme permits on-street sex work in a designated non-residential area between Holbeck and the city centre – but its critics insist that it’s out of control, and many are calling for it to be scrapped.

Since the last public meeting in October, residents and other stakeholders have been meeting with the authorities – via the ‘Save our Eyes’ group, and Leeds Citizens community organising network. Those local representatives spoke positively of their meetings, and paid credit to the commitment of the official bodies, and the changes starting to happen. There are now 7 day a week litter patrols, 4 police officers dedicated to managing the scheme, a 24 hour phone hotline, new CCTV cameras in the zone, and a new full-time support worker working with the sex workers via the Basis Yorkshire charity.

Furthermore, James Rogers (Director of Communities and Environment at the Council) insisted that numbers of on-street sex workers in the city are falling, and that relationships with the women are better than ever – which increases the opportunities to support them, reduce anti-social behaviour, and perhaps enable them to leave the sex industry.

“Progress is being made; we are listening; we want to develop the solutions with you” he said.

And Chief Supt Paul Money once again insisted that trying to “enforce our way out of prostitution” simply didn’t work – and that budget cuts (£25m since 2010 for the Leeds police force) made that even less practical than ever.

However – as before – anger and strong criticism arose as questions were opened to the floor. Residents and business owners from across Holbeck and Beeston spoke of under-dressed sex workers on their streets daily, regularly witnessing sex acts, drug- and sex-related waste, and of themselves (and even their children) being approached by curb-crawlers.

Questions were asked as to whether the scheme wasn’t actually driving up the trade, with sex workers coming in from across the region (a fact disputed by panel members), and punters too; why women were being supported to move into the area (“You wouldn’t house an alcholic in a pub – it doesn’t help them”); why there wasn’t more enforcement happening when the rules were being broken so blatantly; and to quote one speaker:

“When is it not our turn here in south Leeds for this kind of thing?”

Some expressed sympathy for the sex workers – and Emma Flint for the Joanna Project insisted that the scheme was a compassionate response to prostitution, and that it was long-term work to break the cycles that the women were caught in. However, Ian Staines – a local business owner – insisted: “It’s ridiculous, you’re supporting the minority over the majority. This scheme is in complete and utter disarray.”

“You don’t understand: this is our lives. You put the Managed Zone into our community – then you come to the odd meeting here, but we have to live with it. If you haven’t got the resources to police it, you shouldn’t have put it here.”

And Claire Bentley-Smith – local resident and one of ‘Save our Eyes’ coordinators – who was on the event panel, concluded her speech as follows:

“This time last year, many of us hadn’t even met, and so much has already been achieved to bring our community together. We want to protect ourselves, our families and our businesses – but we’re becoming aware of the complexities of how to help the exploited women at the depths of this horrible industry. I hope we can find a way to protect them and the residents of Holbeck and Beeston better this year.”

As the meeting ended, residents were encouraged to keep reporting any local issues. The dedicated Police hotline is 07534 309568; or for non-urgent issues, phone 101 or email InnerSouth@westyorkshire.pnn.police.uk.

For waste and litter issues, contact the Council street cleansing team on (0113) 222 4406, or email sseaction@leeds.gov.uk. Or go via the volunteer-led ‘Save our Eyes’ group, who liaise closely with the Police and Council.

Leeds Citizens are holding a further public forum on the evening of Tuesday 30 January, at the Holbeck – full info to follow. And watch this space here at South Leeds Life for full ongoing coverage.