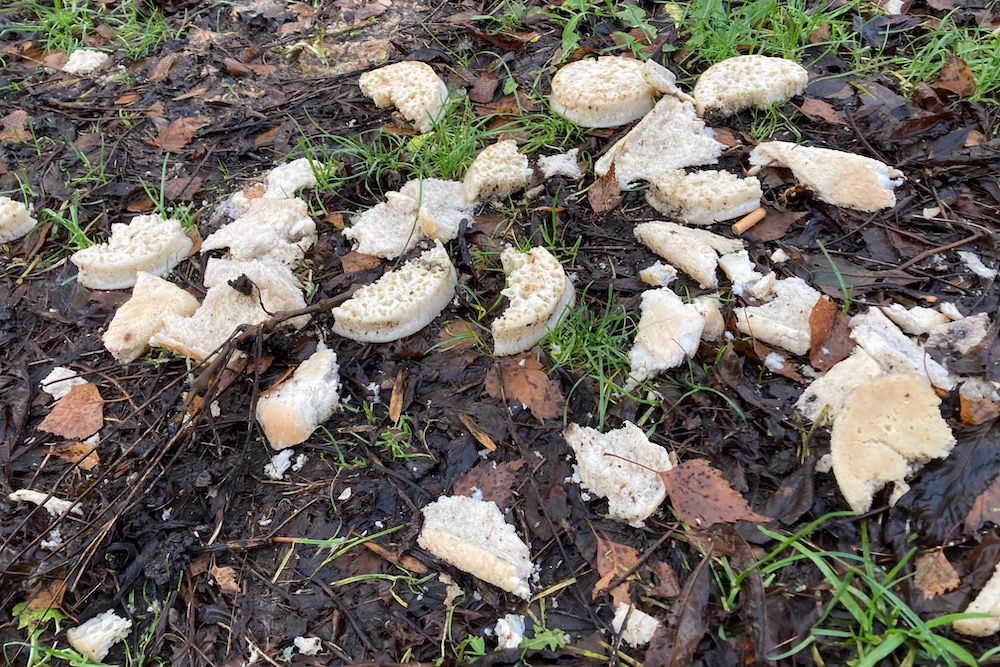 I should clarify, as a paid up member of the RSPB I am not against feeding birds and have several feeders in my garden. What I’m talking about is leaving bread in the park “for the birds.”

I have two dogs and regularly walk them in various greenspaces across South Leeds. Although Cross Flatts Park is my nearest I now try to avoid it. My dogs are well trained with good recall and I like to let them off the lead so they can run around and get the exercise they need.

Unfortunately, that means that sooner or later they will find some human food. Dogs are scavengers by nature so it’s not their fault that they search it out and scoff it down before I can intervene.

My dogs have found all sorts in Cross Flatts Park and it seems to be getting worse. Children dropping sweets and ice cream is understandable. Loaves of sliced bread and piles of chapatis are not uncommon, even breakfast cereal. A couple of months ago, in a possible sign that Beeston is going up in the world I came across a pile of croissants! Bones, presumably left over from a barbecue, half eaten fish, chips and burgers – this is just littering – please use one of the many bins in the park.

I once challenged a guy who had just thrown half his burger out of his car window, over the fence into the park. I don’t like to be too confrontational so I opened with “Excuse me, I think you’ve dropped something …” His reply was, you’ve guessed it, he was leaving it for the birds.

But it’s the bread and chapatis that I want to concentrate on. Much of this is deliberately put out “for the birds” – so with good intentions. But birds don’t need bread, especially the highly processed white sliced variety, in fact it stops them getting the food they need.

The bread fills their stomachs but doesn’t give them the nutrition they need. Birds should be eating seeds, bugs and worms.

So who does eat the bread that gets put out? My money is on dogs, I know, I see it happening. Dog owners spend a lot of money on dog food to ensure their pets are getting a balanced and nutritional diet. We don’t want that topped up with stale bread or last night’s fish supper thank you. OK, it probably won’t cause actual harm to the animal, but it won’t do them any good.

Then there are the rats. We all know there is a problem in rats in the area, like most inner cities. Rats carry and spread diseases so are a health hazard. If you want to encourage rats, carry on leaving food out for them, personally I would prefer to see fewer rats in South Leeds.

So, if you do want to feed the birds – and we all should, many once common species are under threat and need all the help they can get – please buy them proper bird food. Scattering it on the ground is OK, but hanging it in a proper bird feeder is even better. That will ensure the right creatures are getting it and that you are actually … feeding the birds.