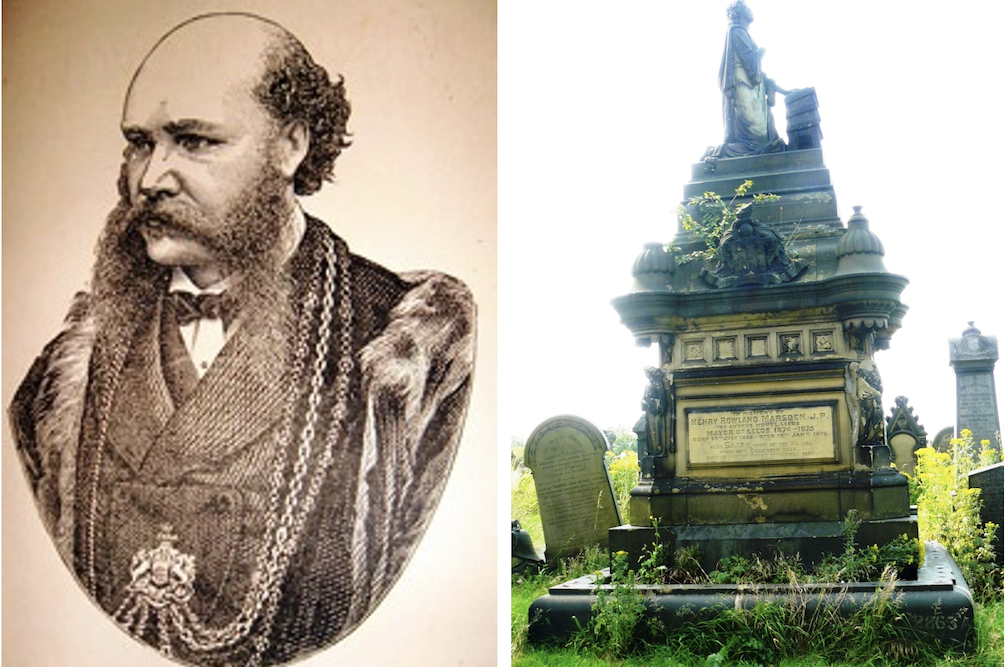 Henry Rowland Marsden was born on 20 July 1823 in Edwin Street, Holbeck and was the son of John and Maria Marsden (nee Halton).

His father had left the Army some two years before, after serving for ten years in the 90th Foot Regiment. However soldiers’ pay was poor and when Napoleon was in prison on St Helena there were many wives eager to welcome their breadwinners back, although Maria was a very hard working women who took in washing to help with the family finances.

There were two boys in the family which seems to have been run on military lines. The boys had no regular schooling apart from attending the Sweet Street Wesleyan Methodist Sunday School, and in Henry Rowland’s case this was kept up to maturity and he eventually became a teacher here. At the age of twelve he started to read, his taste in books were towards travel and science and in later life he expressed gratitude towards “Cassell’s Popular Educator” which he thought had been an enormous help to him.

When he was aged seven he started to earn money, his first job being with an old woman in Marshall Street for which he was paid 1s. 6d (7½p), he was dismissed for “prying inquisitiveness” after twelve months. He immediately started work at Russell’s Pottery on Meadow Road, but this too only lasted a year before he moved on. At the age of 15 he was apprenticed to William King Wesley who, it seems was a good master with an inventive mind. Henry had already made a lathe costing 2s.0d (10p) on which he made snuff boxes, probably to help the family finances. Towards the end of his apprenticeship Henry invented a Sliver Roving Machine, doubtless at the suggestion of Mr Wesley; he was put out at not receiving a penny, although the patent was jointly sold to Lawson Brothers and Ives & Atkinson for a very large amount.

At the end of his time Henry was earning 9s.0d (45p) a week and he thought this inadequate because he wanted to get married but Mr Wesley was obstinate about granting an increase so they parted company. Henry did marry on 1 May 1845 to Sarah Hawling, daughter of Bryard Ashton Hawling at Holbeck. It was only a few months later that Mr Wesley invited Marsden back on his own terms, he stayed with the firm until Mr Wesley retired, he then spent ten months as a foreman in a large engineering works.

Trade was bad in England so in April 1848 when Marsden was aged 24 he decided to try his luck in America taking with him his wife and very young daughter (she later became Mrs C Denison Heaps of Claremont Drive, Headingley).

In New York he found work straight away and over the next two years he became the Patentee of several inventions designed to improve steam engines, lathes, and planing machines. In 1850 he moved to New Haven, Connecticut where he became associated with Blake Brothers where he quickly made a reputation as an engineering inventor as well as being on the road to making a fortune. Henry visited Leeds in 1854 where he promoted Blake Brothers machines and after a short stay he returned to New Haven. It was towards the end of the year that his invention the “Stone Crusher” came on to the market and its success went world-wide.

A fire in 1858 left him and his family losing everything but he worked at his business again and constantly improving his position until 1862 when he decided to return to England. In that year he showed his latest invention at the South Kensington Exhibition, this was a “New Patent Cubing Jaw” which broke road metal in size and shape, this particular invention was also used in mines and helped to cut out female labour there. He was awarded 45 First Class Gold and Silver Medals at various exhibitions by the Royal Agricultural Society and others throughout the world for his patented improvements to stone breaking and ore crushing machines.

When, in 1862, Marsden decided to return to England he had no thought of civic service but in 1866 he was elected to the Leeds Council by the Holbeck Ward by a huge majority. In 1872 he was appointed to the Aldermanic Bench and from 1873 when aged 51 to 1875 he was Lord Mayor and Chief Magistrate. By the time Marsden became Mayor he was a very wealthy man but, he used his wealth in a charitable fashion and even before he became Mayor he gave £2,000 a year to the poor, it would be nigh impossible to list all those who received his generosity, he is also credited with founding the Leeds Music Festival in 1874.

He donated two-octaves of silver bells to Leeds Town Hall as well as presenting it with a portrait of Edward Baines he also held a huge Tea Party in the Town Hall on 4 March 1873 to celebrate the Duke and Duchess of Edinburgh arriving back in England from Russia. One thousand people were freely entertained with hundreds turned away. Everyone went home with a gift of either tea or tobacco.

He also introduced serving refreshments, at his own expense, to members of the Council after their meetings. He lost a very valuable ring in the streets of Leeds, this was found by a Wakefield girl and on its return he rewarded her with 10 Gold Sovereigns. It is said that at his Company HR Marsden Limited, Soho Engineering Works in Sweet Street there was an office at the side of the stockyard gates where Henry would sit every day handing out bread and shoes to the poor.

In 1871 he and his wife Sarah with their three children were living at 15 De Grey Terrace having moved there from Wortley Grange before the family eventually moved to Avenue House, a mansion in Woodhouse Lane, where on 19 January 1876 Henry Rowland Marsden died.

His funeral travelled from the deceased’s residence to the sound of bells being tolled at the Town Hall and churches, flags were flown at half-mast and workshops of all kinds were at a standstill as the Cortege passed on to Holbeck Cemetery where he was laid to rest in the family Vault which is on the Unconsecrated side of the Cemetery. The Vault is still there but is in a very rundown condition.

About 2 March 1878 a statue was erected to him, it is said that 30,000 engineers contributed towards this, his wife performed he unveiling ceremony, the statue was by the Leeds Sculptor John Throp. Unfortunately, the chosen site was poorly located being at the junction of Woodhouse Lane, Merrion Street and Albion Street but here it stayed for 72 years before being stripped down and stored for some two years. In June 1952 it was re-erected on Woodhouse Moor where it still stands only about 200 yards from a house in which he lived in at some time in his career. This house still exists and is still lived in.