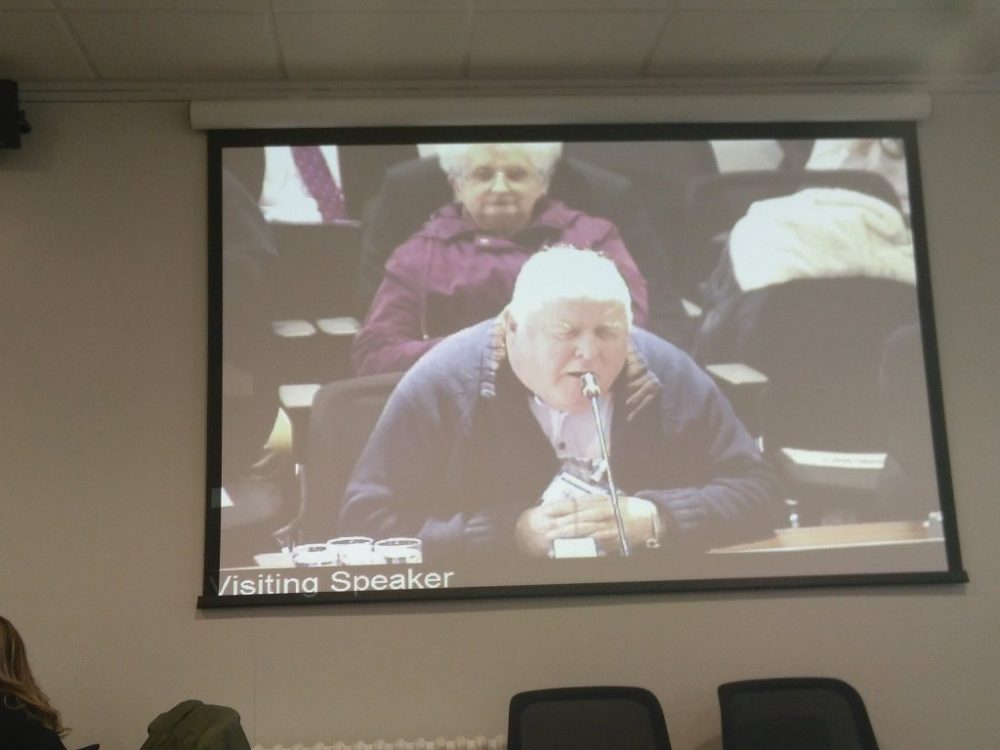 The decision on the major new Park and Ride scheme proposed for Stourton has been postponed, after councillors on the City Plans panel blasted the Council’s own presentations – and local campaigners have vowed to battle on against the project.

The cross-party panel – which decides on whether or not to grant planning permission on controversial or large-scale projects – met on Thursday (3 January 2019), following a visit to the proposed site. If successful, the scheme will feature a 1200-space car park on the green space between Hunslet Cemetery and junction 7 of the M621, plus a one-storey terminus building and landscaping, and significant alterations to the motorway junction and to Low Road in Hunslet.

Residents of Hunslet, Belle Isle and Middleton have this last year formed a ‘SPARS‘ campaign against the development. Their arguments have centred upon the loss of green space, local impact (especially on Hunslet Cemetery), a potential increase in local congestion, the inadequacy of the site for development due to flood risk, and the poor quality of community consultation.

Planners have meanwhile argued that the scheme will reduce congestion, and that they have amended it considerably to minimise local impact. If it goes ahead, the scheme will be paid for from the £173m of central government funding, left over from the failed trolleybus project. Click here and here for more info.

Thursday’s plans panel heard presentations from the Council’s planning department team, representatives for the SPARS campaign (pictured), and WSP – the engineering firm overseeing the proposed development. A feisty discussion followed, with councillors echoing many of the objections lodged by 100s of local residents.

But most critically, the councillors slammed the Council’s planning officers for the lack of information and detail in their reports. Cllr Colin Campbell (Otley and Yeadon) stated:

“This will be a big car park, and you’re giving us nice answers, but I’m no clearer as to what it’ll look like. I’m disappointed: this is a major development, but we’ve been given such poor information”.

With the councillors pushing for a postponement until more detail was provided on aspects including the landscaping and the terminus building, the panel were ultimately persuaded to vote to agree to the scheme in principle – but refused to sign it off until they had seen more. Cllr Tom Leadley (Morley North) insisted: “I don’t want to write a blank cheque for this scheme”. Cllr Caroline Gruen (Bramley and Stanningley): “Park and Rides are never beautiful things, but we need to make the best of it.”

“We were disgusted at the lack of transparency and democracy. The Middleton councillors chose not to have any input into the planning application: where were the assurances that Kim Groves and Judith Blake originally gave, that the scheme would be capped at 1200 cars into perpetuity? The number of cars could be increased anytime, just as has happened at Elland Road. The only reason the application was delayed was because of more vigilant opposition from independent councillors and Liberal Democrats”.

The application will return to the next City Plans panel on Thursday 24 January, which will again be open to the public: click here for further info. The campaigners have vowed to continue lobbying in these coming weeks – and are also taking legal advice about mounting a potential judicial review beyond that.