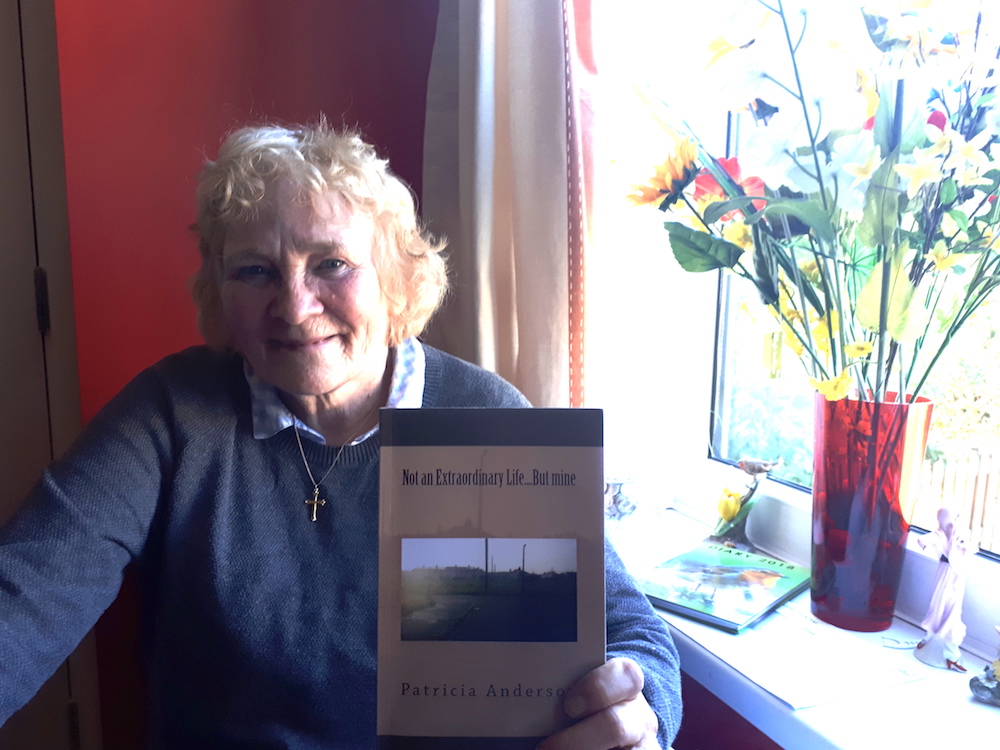 I am looking out of a window onto a busy Dewsbury Road in Beeston on a sunny Friday morning. Sat by the table with a mug of coffee I’m chatting away with Patricia Anderson who’s home I am in.

“I love this view, she says..  you get to see everything; all the people on and off the bus.”

Living in a housing complex, she would periodically sit in the communal area and type away on the lone computer. Now and again when dominoes weren’t being played or other activities such as Tai Chi and events weren’t being held, she would entertain the other residents with her stories. They encouraged her to publish a book as they thought others would enjoy it too. Words began to flow and pages upon pages gathered until there was enough for her son Karl to compile them into a small draft.

Eventually her son had enough to work with and got her to read it through. Not being that bothered to look at the typos before the book was published she did notice (after being published) the word ‘pawn’ had been written the other way! Completing the Amazon process (they make the book for you and sell it £4.04) Patricia only receives the royalties which amount to under £1 for each book. Her intention is to be able to give some to charity.  She says:

Flicking through the book, it’s compact and reader friendly, it only took me two hours to read and her two months to write. The front cover is of a housing estate in Middleton that no longer exists. However, the memories do and Patricia is full of them, crisp and clear of events people, places and the music, including; rationing, the Tivoli picture house, dancing at the Tenants Association in Middleton and Beeston Youth Club.

She tells me snippets of the stories of her life from the book like when she was nine years old her and her friend used to go round to people houses and take their babies for walks in prams around the area. Parents would say “Don’t go far” and that’s if they didn’t know you! It was a time of innocence and gave the mums a break. There’s another story about when her and her friend Joan eloped to Scarborough for the evening – but you’ll have to read the book to find that one out! The stories flow and interweave throughout the decades and of family values set against the socio-economic backdrop of an expanding city and changing attitudes.

She likes to think her own memories will evoke fond memories for others in the area of south Leeds. This is evident and all the feedback so far is positive. My favourite part is:

“Riding the tram going through the wood on a snowy winter’s day like fairy land and slag heaps from the local mine looked like giant mountains to the kids.”

Patricia is bright eyed and full of energy. At 5 ft she darts around in jeans, a smart shirt under a jumper and trainers – photographs in the book show her as a keen hiker in her forties. The book  flows over the years combining lows with the laughter keeping the humour throughout. One lady in particular Patricia has lost touch with is Margaret (nee) Kilmartin, who lived all the way over in Armley (they used to write to each other and after one particular episode their correspondence ended). If anyone knows a Margaret nee Kilmartin please contact South Leeds Life so we can put you back in touch.

Patricia has a full life of changing careers from Moorhouses Jam Factory to LGI Ward 28 to Social Welfare qualifications and Astrology. She spends a lot of time walking with her friend Ralph and has completed all of the northern canal towpaths. She is also a flutist at the Citizen’s Orchestra playing Jazz and Swing.

I asked her what she had learnt from this exercise referring back to the original purpose – she says it’s very hard for the teenagers these days.

“Yes, there was stress but we didn’t know it as a word. These days the world is closer but also isolating. Our world was small but we didn’t have the pressures young people have these days.”

I just hope her great grandchildren will appreciate what a star they have for their great grandma and be glad they are part of it too!

You can order Patricia’s book through Amazon by clicking here.