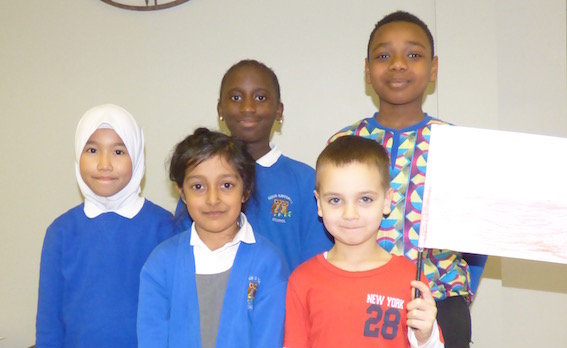 Like many schools in South Leeds, pupils at Hugh Gaitskell in Beeston speak many different languages as well as English.

Friday 4 March 2016 was declared Mother Tongue day as the school set aside a day to celebrate the linguistic diversity of the school community. As well as hearing other languages, the children dressed up in traditional costume from their family’s country. I called in on one class who were teaching each other how to say “Hello, my name is …” in Chinese, Polish and Romanian.

I then met a group of children from across the school who told me about what they had been doing.

“We painted flags of different countries this morning” explained Samuel, whose family came to Leeds from the Democratic Republic of the Congo and Angola. As well as English, Samuel speaks French and the African language Lingala. “People stood up and then we drew the flag of the country their family came from.”

In assembly they heard the story of a child who moved to a different country and had difficulty learning the new language.

Filip says he often speaks to his friends in Polish at break time, but speaks English too. Samuel says it’s important to keep speaking ‘home’ languages.

“It’s important to stay in touch with your family and especially those that have passed away.”

Karolina Gieleta who teaches one of the Year 1 classes is originally from Poland. She explained to me that children who speak another language as well as English achieve very well in school.

“It has been a very good day’” she continued. “We want to encourage children to learn more languages. We want them to feel proud that they can speak more than one language and not feel ashamed that they are not from England.”