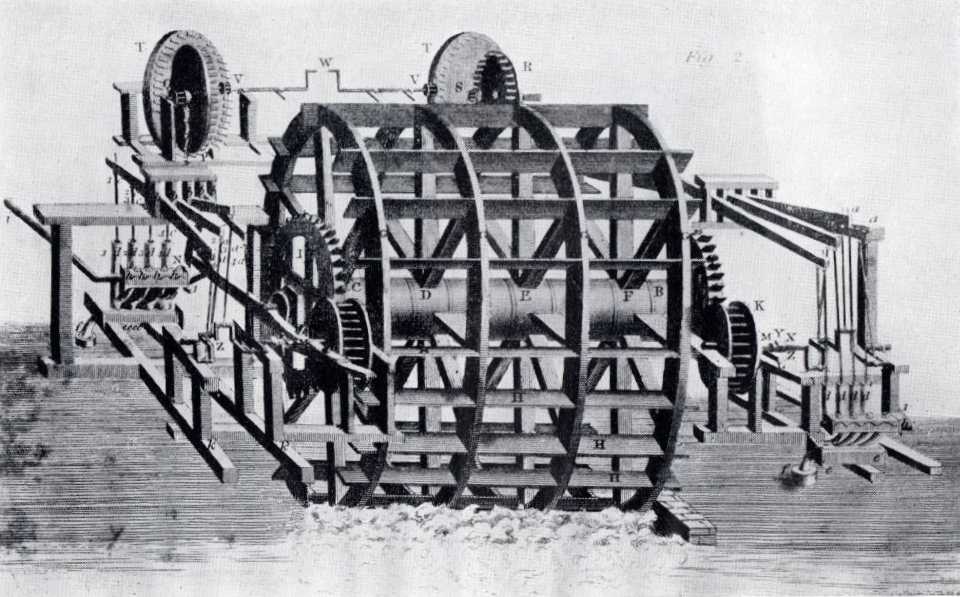 Walk down Lower Briggate, cross Call Lane at the traffic lights then turn left and walk east for a few paces and there on your right is a nondescript back street going down to the River Aire.

This is Pitfall Street, at the bottom of the street but clear of the river had stood Pit/Pitfall Mill, this had originally been two fulling mills then a rape mill before housing a water engine in 1694.

Water is a priceless and undervalued commodity but it was not popular with our forebears before the second half of the 19th century. People drank little of it and bathed in it even less as water could only be obtained from a river, stream or beck, or wells. All of these sources varied in quality.

London was where Sorocold had built Marchants Water Works, rebuilt London Bridge Water Works and carried out improvements to the New River. He also built waterworks at Bristol, Newcastle-upon-Tyne and Norwich. Among many of his innovations were pumps worked by waterwheels of a self-levelling type which rose and fell in accordance with the level of the stream. It was towards the end of the 17th century and with the increase in population that Leeds decided to follow the other towns in engaging the services of Engineer George Sorocold along with a consultant Surveyor, Henry Gilbert of Leicester, to create a water supply for Leeds.

George Sorocold (1668-1738) could be considered to be Britain’s first Civilian Engineer, being the first non-military person to be styled ‘Engineer’. He was the son of James and Elizabeth Sorocold (nee Barrow) it seems uncertain whether he was born in Lancashire in 1666 or in Derby to where his parents had moved to in 1668. On 7 December 1684 he married Mary Franceys the daughter of one Henry Franceys, an Apothecary in the town, at All Saints, Derby and he and Mary had thirteen children, eight of who survived. George also obtained a degree at Cambridge University.

Between 1685 and 1687 he was involved in the water supply to Macclesfield and in 1687 he was given the job of rehanging the bells at All Saints Church where he was married, this is now Derby Cathedral. In 1692 he constructed Derby’s first waterworks, using a waterwheel to pump water through some four miles of pipework made of elm trunks. For these he developed a boring machine which he later patented. This waterworks lasted nearly 100 years. Sorocold constructed some ten waterworks around the country, including our own in Leeds which brings us to our story.

On 3 March 1693/94 the Leeds Corporation approved a similar design of waterworks by George Sorocold to be installed in Leeds. They also gave £40 encouragement to Henry Gillert, Surveyor of Leicestershire, for an engine to pump water from the River Aire through the streets to all the houses in Leeds who would like to purchase this water and they would be exempted from any taxes.

We saw earlier that Pitfall Mill stood back from the river on what became known later as Warehouse Hill. The goit or mill race ran in a channel from the Kings Mill on the west side of Leeds Bridge running parallel with Swinegate through the tenter grounds and was crossed by half a dozen small bridges until it came to the north side of Leeds Bridge.

The waterwheel was an undershot type, this means that the water flow strikes the floats on or near the bottom of the wheel which was of twin self-levelling format similar to the London Bridge wheel but smaller, this along with the pumps that were mounted at the outside of the wheel was housed under cover in the mill; the ‘wear waste’ or used water was discharged back into the river from under the mill at the corner of The Calls.

There were five main delivery pipes from the engine house at Pitfall Mill to the Cisterns, the first three covered the length of Briggate. The total length being some half a mile and side by side with this would be laid the chief distribution pipe. The reservoirs or Cisterns were situated on the Town Cliff (Tower Hill) in Lydgate which was behind St John’s Church and the Harrison Almshouses for the higher Cistern; and there was a lower Cistern roughly at the junction of Albion Place and Albion Street about the site of the YMCA building. The water at these was initially left to settle and clear. All can be seen on the 1815 Town Plan.

Water was fed down lead pipes to the houses in the town, but because supplies of water became inadequate improvements were made in 1754 and again in 1795 when a new Cistern or reservoir was made at the top of Briggate almost in Harrison Street, just below the Grand Theatre.

At the time the Rev William Sheepshank was Incumbent at St John’s Church and he lived in the Parsonage House in New Street a very narrow street which led from Briggate.

Although Leeds was among one of the first towns in Britain to have a piped water supply to individual houses it only served the wealthy part of Leeds then a town of some 7,000 people and by the early 19th century the Leeds Water Company was supplying around 2,000 houses with water but most continued to use the other sources shown earlier.
By 1830 pollution from industry and waste water had made the River Aire completely unsafe as a source of drinking water.

With the expansion and rise of the Leeds population the number of water connections rose from 3,000 in 1842 to 22,732 in 1852 when the Company was municipalised after being bought by Leeds Corporation for £250,000.