One Piece of Rubbish is an international grassroots campaign started by Leeds-born Ed Platt.

It starts from the idea that rather than just complain about the amount of litter on our streets and the people dropping it, we can actually do something about it ourselves. 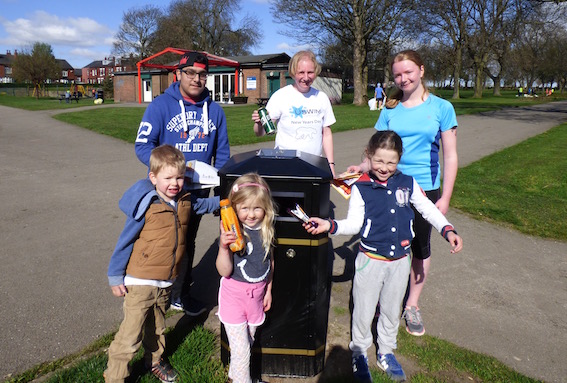 Ed decided to pick up one of litter each day, and spread the message by posting a photo on social media using the hashtag ‘#1pieceofrubbish’.

Soon hundreds of people were joining him and now South Leeds Life is encouraging you to join too.

It is a slow burn campaign. One person picking up one piece of rubbish will make little difference on its own. But the more people join in – and talk about it – the more it will become the ‘normal thing to do’.

Dropping litter is anti-social. It is dirty. It makes neighbourhoods look unloved. It stops people feeling proud of where they live.
We need to make the litterbugs ashamed of their actions. We need to make them think twice before they drop their rubbish.

We teach our children in school about the importance of putting rubbish in a bin, but too many people set them a bad example on the streets.

If we set a positive example it will reinforce what our children learn in school.

Litter has a financial cost too. Leeds City Council spent £12 million picking up litter in 2014/15. That’s £12 million that could be spent on supporting elderly residents, or children, or helping people back into work.

Our local councillors have responded to residents’ complaints about litter, stepping up street sweeping and installing hundreds of new bins across our area.

Now it’s our turn to do our bit. We need to show our pride in our neighbourhoods by taking one small action action every day.
So will you join us? Will you pick up #OnePieceOfRubbish and put it in one of those bins.