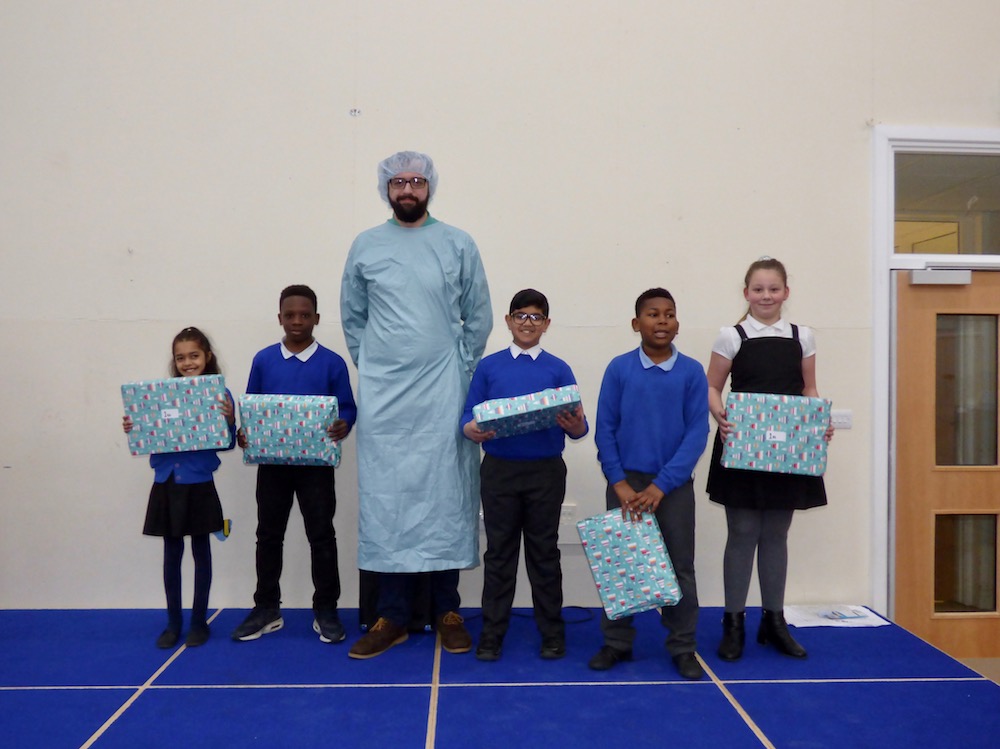 Young engineers at Hugh Gaitskell Primary School showed off their inventions in the school hall this morning (16 March 2018).

On Monday Year 5 had been set a challenge by new graduates from DePuy Synthes next door, to make device help doctors mend broken bones. They worked all week (British Science Week) in small teams to perfect their solution, test it, and develop a marketing plan.

I tagged along with the DePuy Synthes staff as they toured the stands talking to each team. Judging wasn’t just based on testing the strength of the fixed bone, but also how they presented their product with drawings and promotional material. The standard was very high, but eventually the judges decided on three winning teams.

“This is the seventh year we’ve been involved with Science Week at Hugh Gaitskell. It’s great to see every child involved and so enthusiastic about the project. We hope it gives them an insight into the opportunities that STEM* subjects can offer them.”

“The partnership with DePuy Synthes offers pupils the opportunity to learn from real professionals working within the medical/engineering field. This year the children were ‘engineers’ with an important assignment: To design a new and innovative medical device that will have the ability to effectively repair a broken bone.

“Pupils worked hard to create a cost-effective business plan and had to use their problem-solving skills to overcome barriers along the way. Public speaking skills were also developed during formal presentations for the judges!

“The week was a resounding success which culminated in the grand finale showcase. The school would like to thank Kerry and the team at DePuy Synthes for organising and resourcing such an inspiring and exciting project for the children.”

“I am really pleased I learnt something new and useful because I can use these skills in the future…one day I’ll probably be the one who fixes bones!”