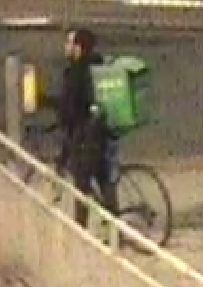 Police investigating a fatal road traffic collision in Leeds and have released CCTV images of two potential witnesses they would like to trace.

Stephen James Linley, aged 33, from Leeds, died at the scene of the collision, which occurred in Black Bull Street near the junction with Armouries Way at about 9.40pm on Friday 12 October 2018.

He was crossing the road when he was hit by a black BMW 325 car.

The driver, a 25-year-old man, from Batley, was arrested on suspicion of causing death by dangerous driving. He was interviewed and later released under investigation pending further enquiries.

The family of Stephen Linley has now released a tribute to him. Stephen’s partner said:

“Steve was so full of life, outgoing, vibrant and funny. He loved his job as a recruitment consultant and our life in Leeds, and he had lots of plans for our future. He enjoyed cooking and trying out new recipes. I remember how proud he was when he made Beef Wellington for the first time and how religiously he watched Masterchef. Steve could name chefs in the way that others name footballers.

“Steve loved hiking in the Dales, particularly Malham and Brimham Rocks. We had some lovely days out there. Even if the walks were slightly longer than planned because neither of us could read a map.

“He enjoyed going out with friends, drinking and watching boxing and formula one. He had so many friends. All the kind messages which I and Steve’s family have received, and all of the generous donations towards his funeral, are a testament to how popular he was. It is comforting to know how much others loved him too. Steve was the wonderful, kind love of my life and it breaks my heart he will never get to fulfil all of the plans we made.

“I know the police are still seeking witnesses as to what exactly happened that night. If you have any information please, please get in touch with the police and tell them what you saw. Nothing can bring Steve back or make it any easier that Steve has been taken from us, but we need to know how this has happened to him and why he is gone.”

Anyone who witnessed the collision or anyone who can help identify the two people in the CCTV pictures is asked to contact the Major Collision Enquiry Team on 101, quoting Operation Pikeview or reference 13180511708.