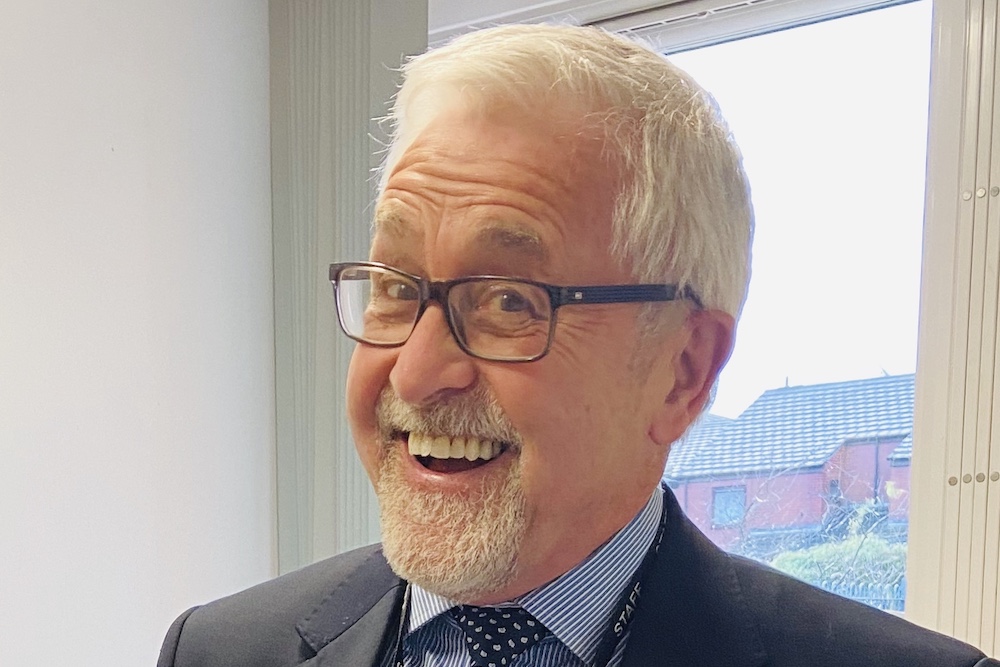 Eric Whitehouse has just marked 40 years of service at Beeston Hill St Luke’s C of E Primary School, having arrived at the school in January 1981.

He is currently the School Manager having retired from his role as Headteacher in July 2011. Two ex-pupils Naomi and Nathaniel Birch (aged 14 and 11 respectively), and their ex-pupil Dad, me, caught up with Eric with the current Headteacher, Louise Booth and the Chair of Governors Laura Hodgkinson.

Why did you want to become a teacher?

There is a politically correct reason which is you want to further the education of children, but then there is the other one, a little shallower: the holidays! I was part of a youth organisation with some teachers and I was getting a fortnight’s holiday a year and they were getting 13 weeks, so that was the actual prompt! That wasn’t the reason I stuck it out, but that was the initial reason. There goes my OBE!

What did you want to be when you were a child?

I think being a Policeman appealed to me. I quite liked the idea of bossing people about! My Dad was in the army so being a Soldier quite appealed as well. Being a teacher never ever entered my head! To be fair, I wasn’t very good at school. Out of a class of 35 I would come about 31st in tests. And half of it was a bit lazy really. I couldn’t be bothered, and not always well behaved either! It was only when I was a teenager that I woke up to the fact that it I didn’t get my finger out I was going to be left behind, so I had to start working.

How did you get your job at St Luke’s?

I was working in a school in Bramley, and someone who was doing some supply work had had an interview at St Luke’s and she said how wonderful it was and I thought I’ll have a look because it was a promotion. I got an interview and I got the job.

The role was what was called a Scale 3 class teacher, with extra responsibility for Boys Games and Science, which was amazing because I ran the football team and I knew absolutely nothing about football!

We heard that you instigated tree planting at St Luke’s is that right?

Yes, absolutely. I have a little disagreement with Janet our Outdoor Activity teacher, because there is tree at the front of the school and I said “I planted that tree.” And I know I did, I planted it personally and she said “you couldn’t have done, it’s an oak tree and it’s a hundred years old.” But I know I did, 40 years ago.

So I say “Fair enough Janet, it must be my memory in my old age!” But when I came, the only trees were the old ones by the entrance of the school, and people were walking through the school grounds so to encourage them not to we planted some trees.

What is your favourite memory as a teacher?

I have a funny one. I had only just started and I had my new class, and they were a little challenging. There were 35 kids in that class and about 28 of them were boys. I was laying out the rules and one of them was that we go swimming every week, at South Leeds Sports Centre and I told them what they needed. So I said “You need a towel, and you need your swimming trunks, and don’t forget when we go” and one of the children said “I can’t go swimming Mr Whitehouse.” I looked at him and asked “why not?” He replied “Because I’ve got this boil on me bum.” However, he didn’t use the word bum! The rest of the class were in hysterics. The child then came back to school as a parent and we laughed about it years later.

What are you most proud of during your life at St Luke’s?

I suppose the thing I’m most proud of is where we are now as a school as to where we were when I started. Over that time the school has got better and it’s built on successes. The school has grown from 12 teachers and around a hundred kids, to 80 plus staff and pushing 500 kids. We’ve made mistakes, of course we have, but looking back, we didn’t do a bad job really. Reflecting on it all I think “Wow, aren’t we lucky that we have this school?”

Why have you stayed at St Luke’s for so long?

They just won’t let me go! When I first came to the school, one of the questions in the interview was “How long do you intend to stay?” and I very honestly said “About 3 years” and that’s 40 years ago!

I just love the place. When I’m at home I get a bit bored sometimes. It’s not like I have to go to work, I go because I want to. I have friends there and people I love, things are always happening and it’s just a lovely happy place to be.
I don’t want to paint it as being absolutely perfect, it’s not. It can be hard, and we have our problems, but we work through them. If you’ve got the right people, the right team and everybody respects and loves each other, you can do anything and that’s the essence of our school. That’s why I like to be there.

Do you have any dreams for the future of St Luke’s?

This sounds cheesy because I know Louise is listening to this, but I know that the school is in safe hands. As far as I’m concerned, and I might be a little bit biased, but I think it’s the best school in South Leeds and it just get better and better. The staff are fantastic and the head teacher is amazing. She is an unbelievably hard working and clever leader. The future of St Luke’s is assured, especially with the recent expansion. It’s such a popular place and I feel very fortunate to be a part of this school.

“One of the great assets of having Eric on the team is the confidence he brings to the leadership. It can be a scary place being in charge and Eric’s not scared of anybody or anything, and that is really encouraging.
Because he has been involved in education for so long his knowledge is profound. Not many people know the history and the legacy of situations in the way that Eric does. And he is in a unique place to give that advice. He genuinely has seen it all before!”

“Parents love him, the kids love him and the staff love him. There are not many families in Beeston who don’t have a connection to Eric, and so many have warm thoughts towards him because of his commitment to the school.”