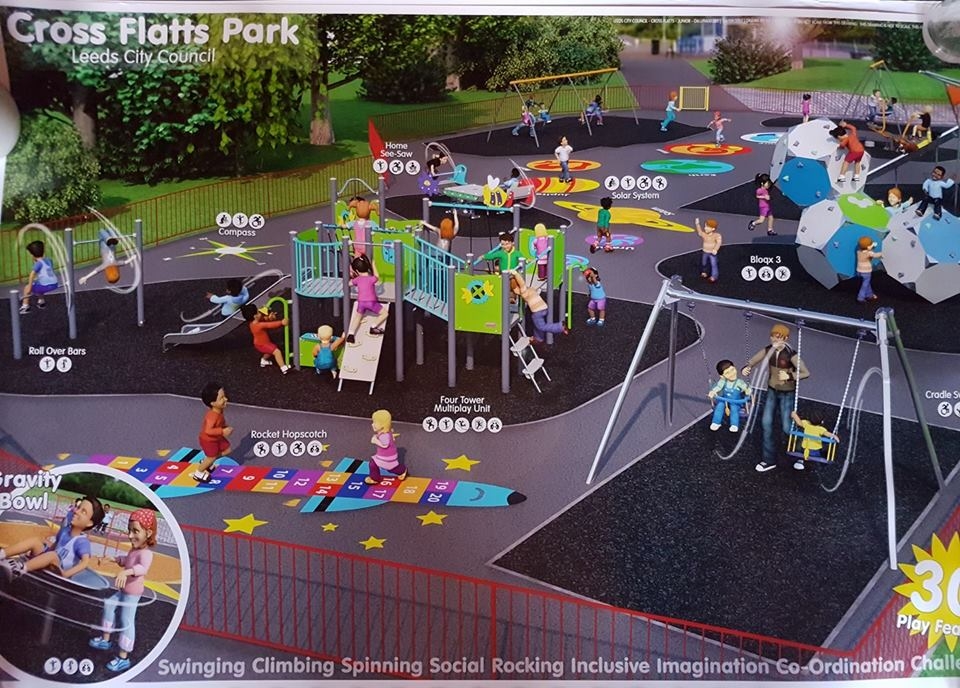 Cross Flatts Park in Beeston will see improvements to paths and play equipment in 2018 and is already benefiting from extra security provided by new CCTV cameras.

The middle playground, just above the multi use games areas, is to be extended and have new equipment installed. Currently the park’s two playgrounds cater separately for for toddlers and older children, which causes problems for parents with children of different ages.

New equipment in the middle playground will be suitable for use by a wider range of children from toddlers to teenagers. It will include new climbing frames, swings and slides as well as new benches and bins.

Councillors from Beeston & Holbeck and City & Hunslet wards, which border the park, have allocated £50,000 from the Inner South Community Committee Wellbeing Budget towards the costs. Groundwork, who will project manage the work have secured further funding.

Work to the paths, largely on the west (Co-op) side of the park, will cost a further £40,000. This has come from Section 106 payments – contributions from new developments in the two wards towards community infrastructure. All the works are expected to be completed by summer 2018.

Back in March we reported that £50,000 from the Wellbeing Budget had been allocated to fund three CCTV cameras in Beeston. Two have been sited in Cross Flatts Park, near the Watsonian Pavilion and the Maud Avenue entrance, with a third on Tempest Road.

We can now report that the cameras have been installed and are fully operational.

Local residents had approached the Councillors with concerns over anti-social behaviour and drug dealing in the area.

Working alongside partners it was decided that CCTV would be the most effective deterrent to these types of behaviour and it is hoped that local residents and businesses will benefit from improved safety in the area and reductions in crime levels.

“Helping people feel safe in their local communities is incredibly important and we were very happy to be able to help fund these new cameras.

“Anti-social behaviour is something that no one should have to put up with and we are hopeful that the new CCTV will make people think twice before they act in such a way.”

“Local residents have approached us on numerous occasions asking what can be done to help combat the concerns they had relating to unacceptable behaviour and drug dealing in the area. CCTV captures events as they happen and can be vital in both monitoring activity but also identifying the individuals involved.”

One Reply to “Cross Flatts Park gets a makeover”