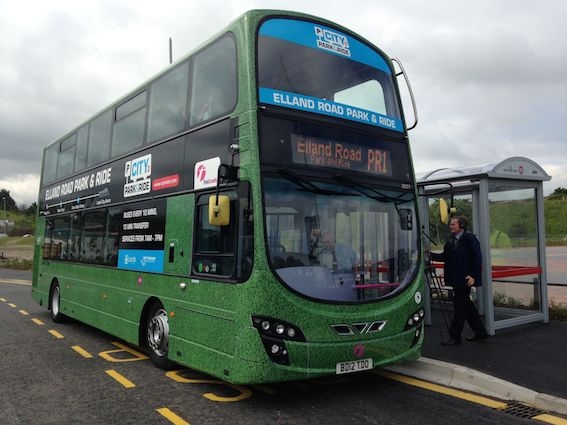 Plans have been published to increase the capacity of the Elland Road Park & Ride scheme from its current 800 cars to 1,350.
The expansion would use the land between the football stadium and the M621 motorway. Buses would also use a one way circulation making use of the football bus gate off the Junction 2 rounabout.

A consultation event will be held at Hillside Enterprise Centre, Beeston Road on Tuesday 10 July from 5-8pm. Plans for the extension, and for the White Rose rail station, will be on show and officers will be on hand to answer questions about the proposals.

Consultation is also underway on plans that would see buses given priority on Hunslet Road and Low Road. The plans are part of Connecting Leeds, the Council led plan to improve transport throughout the city.

The end of June saw a series of drop in events and the consultation continues online until 27 July at www.leeds.gov.uk/connectingleeds.

The proposals seek to maximise the space and efficiency of the road network and offer enhanced cycling and walking provision as well as improving air quality through reduced congestion. The plans include longer and new bus lanes, smart traffic signals and new junction layouts to help keep buses moving, especially during peak travel times.
The road will be narrowed to one lane in each direction for other road users.

Doubling bus usage in 10 years from the current 250,000 journeys per day is the target. This will greatly reduce the number of vehicles on the road and ease congestion.

We spoke to Cllr Richard Lewis, executive member for regeneration, transport and planning and asked him if the emphasis on buses was about discouraging cars from using the city centre.

“I want to encourage people onto buses” he said “It’s carrot rather than stick. We’ve all become far too dependant on the car. In terms of how it impacts on the city it’s damaging it, it’s majing it a less pleasant place to be. The more we copncentrate on the car, the slower the city’s going to move – we really need to tackle that. I’d rather say – look we can get you onto a fast bus that will take you into the city centre, with great facilities.”

The Connecting Leeds plan has been developed from the feedback received in the biggest-ever transport conversation held with residents, businesses, stakeholders and visitors in the city which included more than 8,000 people taking part in a survey in 2016.
Plans for a new rail station connecting the White Rose Office Park and Shopping Centre were published earlier this week. Funding comes from the £173.5million pot given to Leeds after the Trolleybus project was blocked.