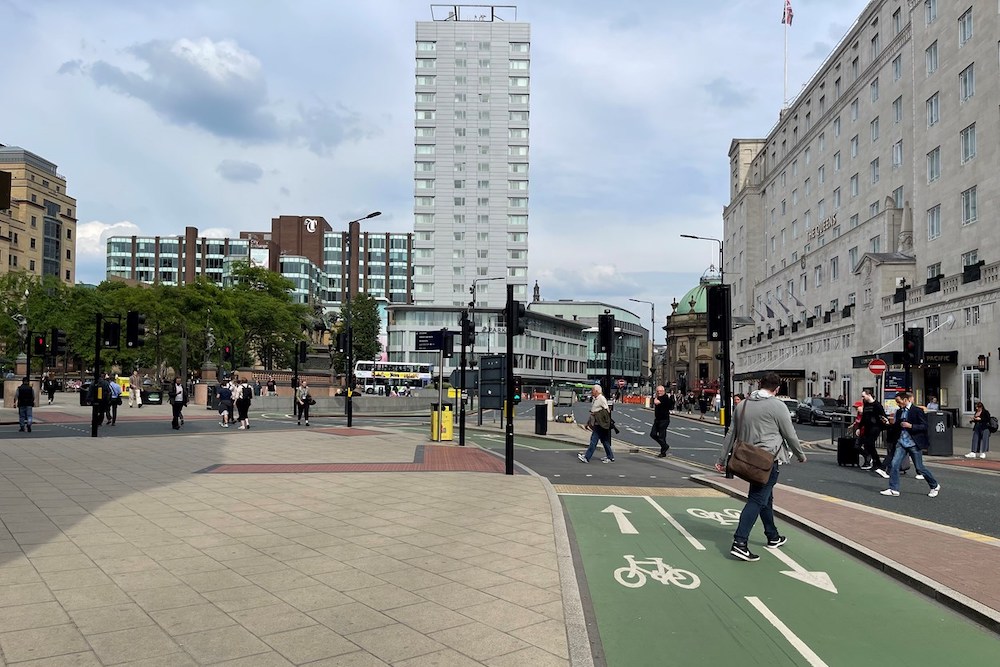 Preliminary works to transform City Square into a more people-first environment will begin from Sunday 4 September 2022 affecting routes into the city centre from South Leeds.

The traffic management works will divert all through-traffic away from City Square, ahead of its permanent closure to traffic in February 2023 – helping to create a world-class gateway to the city centre and making it an even safer place to live, work and visit.

In order to complete the necessary works in time for the permanent closure, keep buses moving, and to ensure the safety of the public and workers on site, increasing levels of traffic management will be required.

From 0:00am on Sunday 4 September, diversions to traffic travelling north into the city centre along Neville Street, Bishopgate Street and Swinegate will be in place.

Vehicular access through City Square on Wellington Street past the railway station and The Queens Hotel will be restricted to local property access only, once the works start in September, until the permanent closure comes into effect next year.

The significant nature of the diversion and traffic management will make this route into the city centre no longer attractive to motorists. It is important that visitors and businesses who currently use this route begin to plan ahead and consider alternative methods of transport or alternative routes into the city, to avoid being more adversely affected when the works start in September.

Drivers wishing to gain access to the railway station pick-up/drop-off on Aire Street will need approach from the Whitehall Road direction instead of driving through the Square. General vehicular access will still be permitted to Lower Basinghall Street from Bishopgate Street for localised access and designated blue badge parking bays, as at present.

“Removing through traffic from City Square has been a long-held ambition, and feedback from residents and business was that they want major improvements such as these made as quickly as possible, so we’re working hard to do this.

“The ongoing works at the station provide the opportunity to carry out these works at City Square at the same time and redress the current imbalance where thousands of pedestrians are using this area each day yet its layout favours vehicles – at a time of growing footfall at the railway station.

“We ask for people’s patience as we recognise that these improvements will cause disruption over the short term, and we apologise for any inconvenience. We are committed to keeping everyone updated as regularly as possible on any changes or works which may affect how people travel into the city.”

Motorists who normally travel into the city centre along this route are urged to plan their journeys in advance and allow extra time and consider alternative ways to travel.

Motorists who can travel to their destination without driving through the city centre are encouraged to consider a number of diversionary routes which involve using junctions 2 and 4, off the M621.

More information is available at www.leeds.gov.uk/planahead including maps to key destinations in the City Centre.

Improving transport across the city

The works at City Square, alongside other schemes such as the Leeds Station Sustainable Travel Gateway and improvements to Armley Gyratory, are part of a major package of investment that will help to transform our city’s highway network. Major works to the Regent Street flyover were recently completed, and the M621 J1 to J7 improvement scheme is currently being delivered in partnership with National Highways.

“Schemes such as these help us deliver our Connecting Leeds transport strategy, which has set out a vision for Leeds ‘to be a city where you don’t need a car’ by creating infrastructure and spaces which favours healthier and more sustainable methods of travel.

“At the same time as reducing the amount of traffic in the city centre, we’re also improving the road network outside the city so people can get around easily without travelling through the city centre unless they really need to.

“Motorists who do need to travel into the city centre by car will still be able to do so, and we will do what we can to guide them to their destination, but these transformational improvements will mean that some routes will permanently change.”