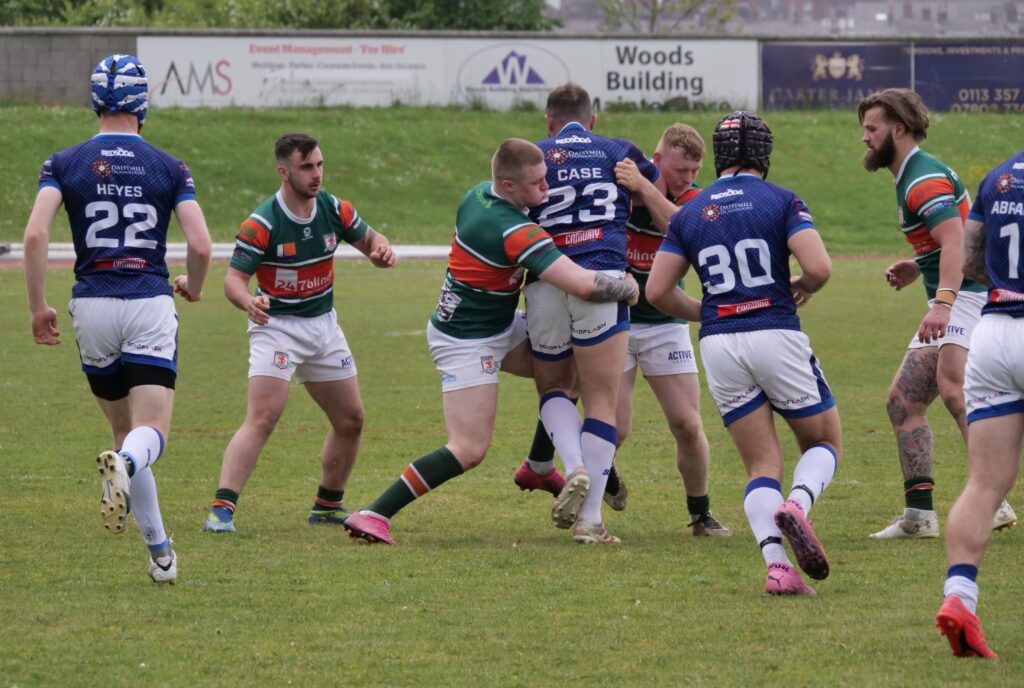 Hunslet went into yesterday’s game at Heywood Road, Sale against Swinton Lions (21 August 2022) knowing they weren’t favourites to win. But after last week’s heavy defeat at Keighley a good performance was needed to rebuild confidence.

Despite the score, for large parts of the game Hunslet played well, but that inconsistency crept in again as Swinton scored twenty unanswered points in a ten minute spell before the break.

The Lions sit 3rd in the League and will hope to be promoted as Play-off favourites, whilst Hunslet, currently in 6th, are clinging onto a play-off spot with Oldham breathing down their necks and a show down on the horizon between the two clubs.

The Parksiders got off to a flyer as an inch perfect Patrick Walker kick was plucked from the air by Jack Render to score. 0-4 after only 2 minutes.

Swinton hit straight back though with only 4 minutes on the clock. Jordan Case made the break and Lewis Hatton bagged the try with Dan Abram adding the extras. 6-4

The game then moved from end to end as both teams tried to get on top, but it was Patrick Walker who squared it up on the quarter mark with a penalty after good Hunslet pressure. 6-6

Swinton’s forwards started to gain the extra yard as the half went on and eventually they broke the Hunslet defence. Else’s kick was followed up well by Gregson to score and with Abram’s accurate kicking Swinton led 12-6.

With only ten minutes to the break Hunslet needed to steady the ship, but Swinton gained a set restart and with quick hands Max Roberts sneaked in at the corner. A conversion by Abram and a penalty moments later for lifting in the tackle and the lead was 20-6.

Swinton sensed Hunslet were tiring and after a break on the right hand side an inside ball sent Richard Lepori in under the posts to give the hosts a comfortable lead 26-6.

A harsh ten minutes then for Hunslet, but this is how games can turn in a brief period. Even though Hunslet were unlucky not to score on the hooter as Render again nearly profited from a Walker kick, the damage had been done and the 2nd half would be about pride.

Hunslet knew if they could score a couple of tries quickly it may unsettle Swinton and went straight about their work. Josh Jordan–Roberts and Ethan O’Hanlon tested the Lions defence on a number of occasions, but Swinton were up to it.

An hour in and no points in the second period until a winding Jordan Paga run pulled the Swinton defence enough for Jordan Syme to grab a try. Walker converted 26-12.

Hunslet again tried to get on the scoreboard but to no avail. The game would be finished off by the host’s best players Jack Hansen and Lewis Else scoring a try each.

Hansen finished off a fine break on 74 minutes and Else danced over from close in the remaining seconds, whilst Dan Abram completed 7/7 kicks for the day.

Hunslet will hope the 2nd half display will instil confidence for the remaining games against Doncaster and Oldham. Beharrell and Paga were certainly busy and Jordan-Roberts and Hird ran very strongly, but they will need to be on their game if they hope to progress into the play-offs and beyond.

Photo: Action from the home fixture against Swinton in May 2022 by Paul Johnson Phoenix Photography