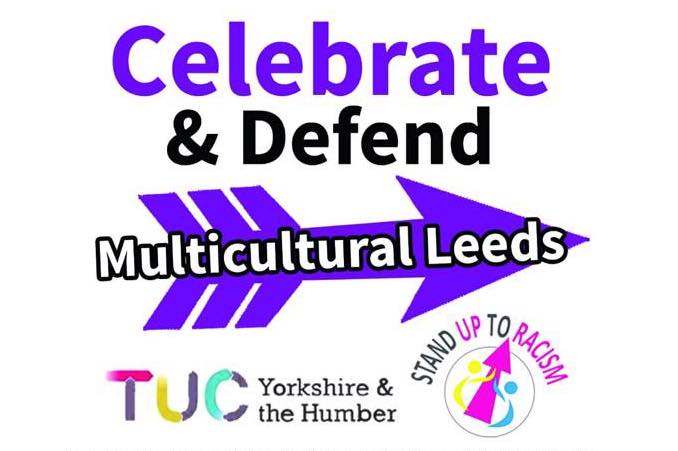 A demonstration has been called by Leeds Stand Up To Racism and backed by the Yorkshire & Humber TUC to counter a march planned by the English Defence League (EDL) in Leeds on Saturday (7 July 2018).

People are encouraged to join the demonstration on the Town hall steps from 12:30pm and show that Leeds won’t be divided by racism.

The EDL march is in support of their jailed ex-leader Tommy Robinson. On 1 June 3-400 racists and fascists marched through Leeds in defence of Robinson chanting ‘Muslims off our streets’. Just days later, on 5 June, the Jamia Masjid Abu Huraira Mosque and the Guru Nanak Nishkam Sewak Jatha Gurdwara in Beeston were targeted in arson attacks, treated as Hate Crimes by West Yorkshire Police.

In response to this, over 150 people joined a ‘Beeston Together for Peace and Unity’ vigil called by local Stand Up to Racism activists in Cross Flatts Park, and then walked to the Mosque and the Gurdwara to show solidarity.

On Saturday 9 June a pro Tommy Robinson demo in London saw around 15,000 far right activists take to the streets. The demonstration to defend ‘free speech’ saw the police attacked and Robinson supporters giving the Hitler salute in Whitehall.

It is symbolic that the EDL are now planning to march on 7 July in Leeds. It is the anniversary of the terrible tube and bus bombings in London in 2005. In the immediate aftermath racists and fascists tried to exploit the tragedy to whip up racism in Leeds.

The atmosphere created by the far right and Robinson supporters is toxic. Whenever fascists march and mobilise; violence and racism follow in their wake.

For more information go to www.standuptoracism.wordpress.com or www.facebook.com/leedssutr/ on Facebook.

2 Replies to “Call to celebrate and defend multicultural Leeds”