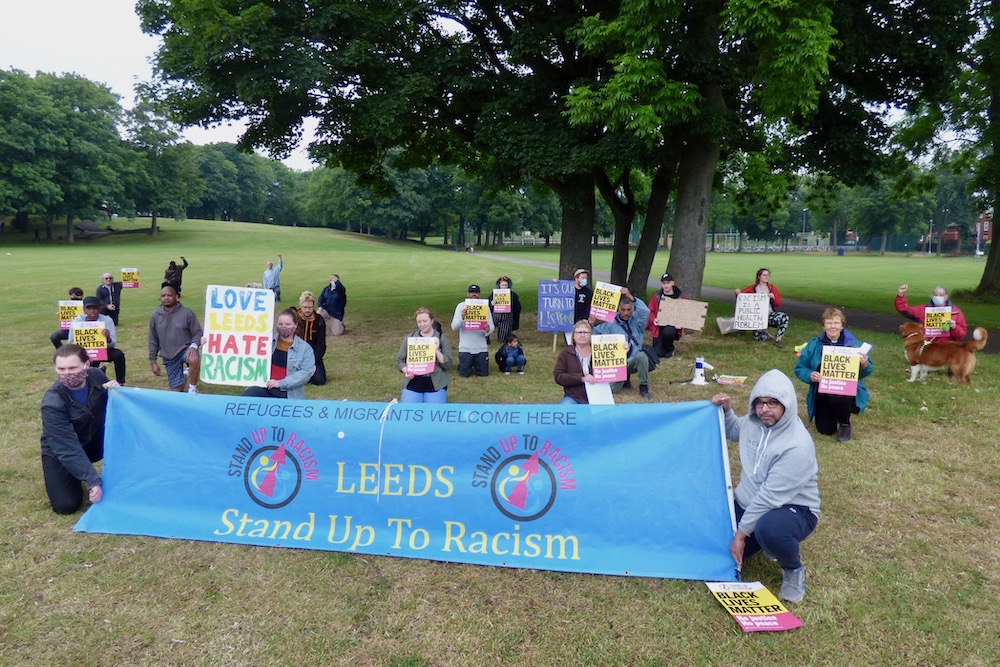 The Black Lives Matter movement has exploded onto the political agenda in the last month. The murder of George Floyd by Police in the US sparked anger on both sides of the Atlantic. We asked one South Leeds resident what the movement means to her.

I am a history teacher in a large secondary school in Leeds. I am a proud resident of Beeston and my family’s origins are in Afghanistan. I am delighted to be given this opportunity to explain why ‘Black Lives Matter’ is so important and to appeal to all local people in our multicultural community, to support the movement.

In Beeston we have some recent history of challenging racism that we should be proud of. We have a vibrant local ‘stand up to racism’ group and alongside local councilors people have come together to show support for the ‘Black Lives Matter’ movement, ‘taking the knee’ in a socially distanced way in Cross Flatts park and along local streets.

When two years ago the local Mosque and Gurdwara were attacked, the community came together in a show of unity to offer peace and support.

The truth is we are facing serious challenges. Years of austerity have both widened existing inequalities and intensified economic hardship for all communities in South Leeds. One immediate impact of the Covid-19 crisis will be to trigger attempts to cut public spending which means cuts to our local services.

We are only going to be able to protect our communities and services if we are united in our response. Racism divides the community. Racism divides neighbour from neighbour, work colleague from work colleague. The Black Lives Matter movement on the other hand, in recognising and challenging the racism that still exists in British society, helps to build unity. Unity is what we need to collectively build a positive future.

Let me take you back to 17 April 1969 when a black man called David Oluwale, was (not for the first time) beaten with truncheons by two Leeds police officers who smashed his head against the pavement and urinated on his body. After the beating they ran him out of town towards the river where his body was found. ‘Wog’ was written on the nationality section of his death certificate.

David, like many in our community, our mothers and fathers, grandparents and great-grandparents came to this country to make a positive contribution to British society. And we have.

Not just economically in terms of providing the expanded labour force that was the basis for the growth of the British economy after the Second World War, not to mention the creation of a national health care system; but also culturally. Our way of life, everyone living in our communities way of life: art, music, theatre, festivals, religion, language, poetry is enriched beyond recognition through the coming together of diverse experiences from all over the world.

We are lucky to live in a multicultural community, where these diverse experiences and histories are distilled. Multiculturalism enriches everyone, Black and White. However, by the same logic racism diminishes us all.

The Black Lives Matter movement has exposed the extent to which racism, including overt racial violence, and institutional racism is still experienced by minority communities in Britain today.

Thanks to the movement, the names of Christopher Alder, Leon Briggs, Anthony Grainger, Sean Rigg, Dalian Atkinson, Darren Cumberbatch, Edson Da Costa, Kingsley Burrell, Brian Douglas and many more Black and Asian people who have died after coming into contact with the police are becoming familiar to a much wider range of people.

Many are also discovering that institutional racial violence is perpetuated on a daily basis through control measures on the streets and the whole process of criminal justice. For example, Black young people are 9 times more likely than whites to be stopped and searched by the police.

Furthermore, the whole PREVENT agenda represents institutionalised Islamophobia in terms of the measures the state uses to control and negatively label a whole generation of young Muslims. I myself have had to educate my son, aged 12, about what to do when (not if) he is stopped and searched by the police.

The movement has also precipitated some honest conversations about institutional racism more generally, in terms of education systems and in terms of health and employment inequalities.

The uncomfortable reality is that Britain’s involvement in the slave trade, colonialism and imperialism was brutal, inhumane and underpinned by ideologies of white supremacy. This is a legacy which we are still dealing with today. It’s a history that has largely been ‘whitewashed’ out of the educational curriculum, as have the positive contributions of non-white cultures and societies to the whole historical development of the human race. Ignored in the curriculum, children from minority backgrounds find themselves more likely to experience overt racial abuse, and are up to 9 times more like to experience exclusion from school.

Furthermore, the Covid-19 crisis has shone a light on the discrimination experienced by Black and minority ethnic groups in relation to health care outcomes. BAME groups are twice as likely to die of coronavirus than their white counterparts.
BAME workers are also proportionally more likely to be on the front line as ‘key workers’ and therefore are more exposed to the virus.

The continuing discrimination and poorer life chances experienced by BAME communities also clearly enhance the risk of dying of the disease. Also, we shouldn’t forget the whole scandal surrounding the treatment of the Windrush generation, or for that matter the government’s attempts to create a ‘hostile environment’.

The mask of respectability has been stripped away from government actions and racism has become explicitly articulated as policy. Of course, this explicit racism is promoted and amplified by the media who for years have demonised immigrants as ‘scroungers’ or ‘terrorists’ and have consistently promoted bigotry. Not surprisingly therefore, in recent years reports indicate a significant increase in racist abuse and an increase in hate crime generally in society.

The experience of racism runs very deep. It is institutionally embedded in the structure of society. That is why the movement that has erupted is so powerful and at times, emotional. It expresses righteous anger and frustration that has been building for many years.

However, the anti-racist movement that has emerged is beautifully diverse. It has involved Black and White standing together to challenge racism. And it has been young, representing real hope for the future.