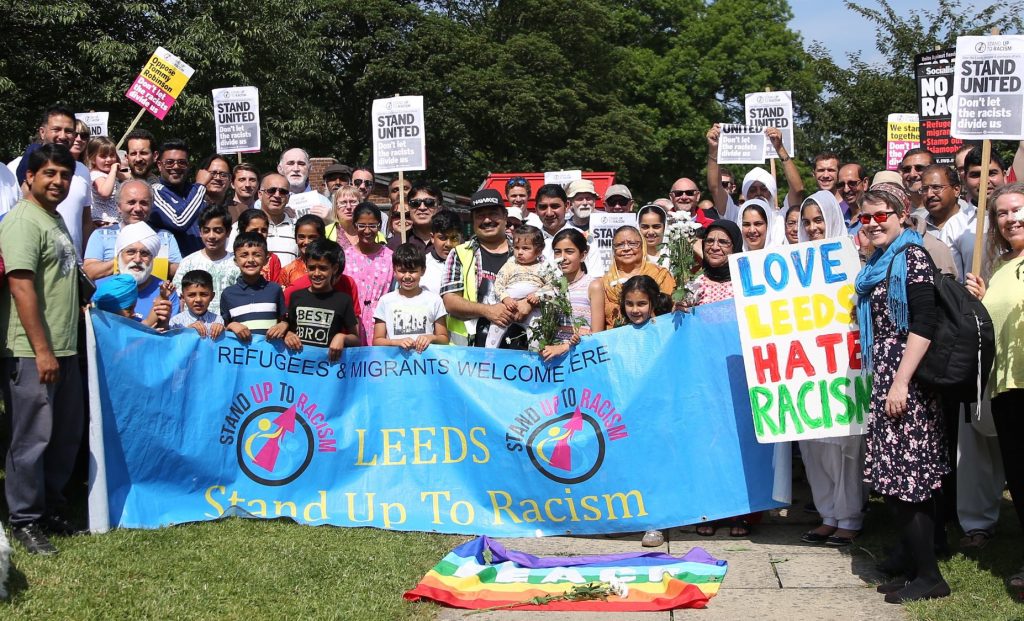 Hundreds gathered by the Peace Tree in Cross Flatts Park in a show of unity this afternoon (10 June 2018) days after the arson attacks on a mosque and Sikh temple in Beeston.

After speeches they moved off and marched peacefully to Hardy Street Mosque where flowers were laid, then onto the Gudwara on Lady Pit Lane to again lay flowers.

The vigil was addressed by a wide range of speakers including Councillors, faith leaders and trade unionists. Messages of support were read out from Hilary Benn MP, Asa Briiton, Headteacher of Lane End Primiary School and Kevin Courtney the general secretary of the National Education Union.

Beeston poet Mark Wilson had written a poem for the event and Rosa Kincaid sang the radical song ‘Bread And Roses’. These are just some of the many comments:

“I am proud to see so many people have come out to show solidarity. These evil acts will not divide us.” Cllr Mohammed Iqbal

“I was one of the young people that planted the peace tree in 2006. I was and continue to be proud to be a true representation of our multi-cultural Beeston.” Harkan

“Now is the time to stand shoulder to shoulder in solidarity with each other, as the people of Beeston have always done, and against those who seek to create division.” Hilary Benn MP

“As member of Jewish community deeply saddened shocked by recent attacks in Beeston. We stand in solidarity with our bothers and sisters of faith and none.” Tania Bintcliffe

“If you want to see the community come together, I suggest you come to Beeston Festival on 14 July, and you will truly see what working together in a community is like. My advice to you all, when you walk in the streets of Beeston is to look everyone in the eye and give them a smile.” Cllr Angela Gabriel