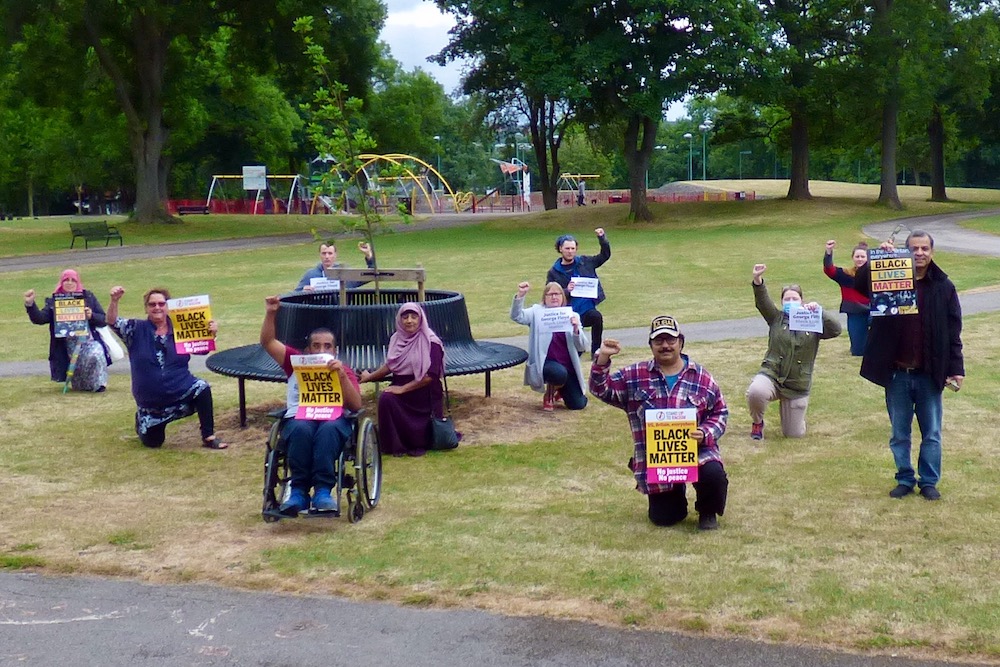 Twenty two members of the local community came together in Cross Flatts Park yesterday (3 June 2020) to ‘take the knee’ to show their solidarity with the family of George Floyd and the Black Lives Matter movement in the United States.

Large scale protests continue in cities across America following the death of George Floyd as a Police Officer in Minneapolis knelt on his neck for almost nine minutes. In the UK Stand Up To Racism called for protests in solidarity in small groups and on door steps.

Addressing the protesters Sam Kirk from Leeds Stand Up To Racism said:

“What about here? This does happen here in the UK. Mark Duggan was shot dead by Police in 2011 and just a month ago Desmond Ziggy Mombeyarara was out for a walk with his five year old son in Manchester when he was tasered by Police. We don’t see pictures of white people being tasered like that. We have racism in this country too and it’s important that we stand up to it.

“It’s good to see you all here in Beeston today. We deliberately didn’t advertise it widely because the Covid-19 virus disproportionately affects people from BAME communities and the last thing we wanted was anger over what has happened in America to spread the virus here.

“The Beeston community has a proud tradition of coming together over issues of racism   and tonight has been another example of that.”

“It is a sad day that we should be gathered here again for something that shouldn’t be going on in the 21st Century. I’m really proud of this city, last night all the Council building were lit up in purple in solidarity with George Floyd and his family. Look at who’s here, there are people in scarves, Asian, white, all sorts of people and that just shows you how great a community we are.”

“Is it relevant to us here? Yes it is. It’s only two years ago we were stood here demonstrating with the exact same banners because of the attack on a local mosque and a local gurdwara. We have to, as a community, come together. Thank you for coming and let’s continue to show solidarity with our BAME brothers and sisters.”

“I’m glad to see so many have come out tonight. Unless we all make a stand, we will be here next year and the year after. It’s all of us joining together no matter what colour our skin is, no matter where we were born, we’ve got to stand together. If we hear racist language or we see something going on we have to call it out.”

Others talked about recent incidents of racism including the racial abuse of a asian security guard managing the queue outside Hunslet Morrisons.

“I was born and bred in Holbeck and Beeston. I grew up oblivious to racism, I worked 32 years on the market and I never felt intimidated, but in the last three years I’ve felt intimidated.”