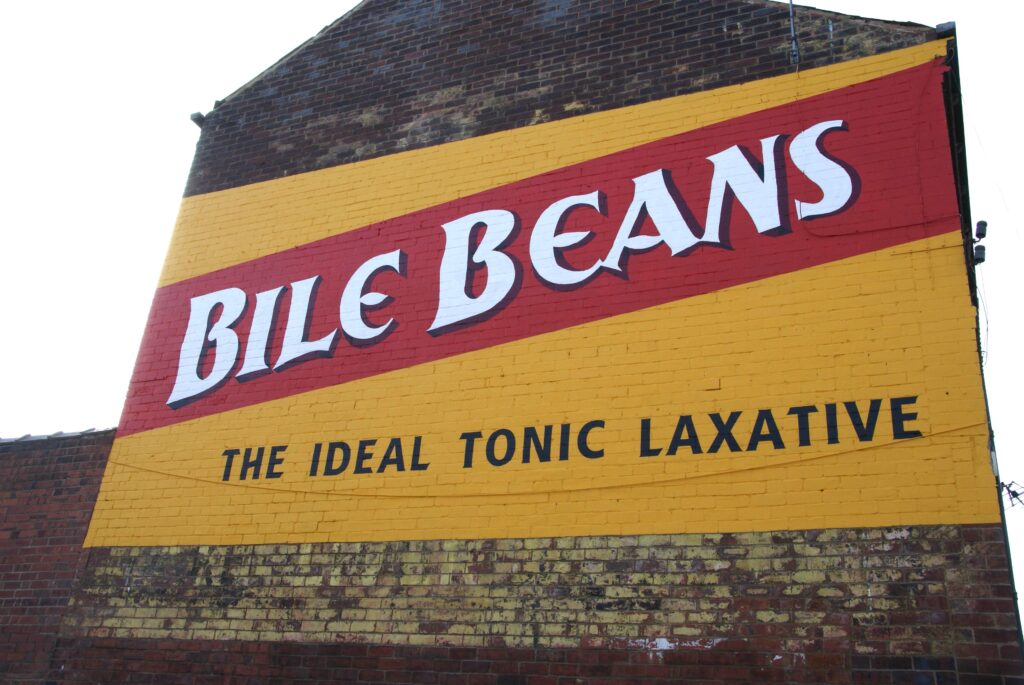 When a modern advertising hoarding was removed from the end of a row of houses at the Balm Road junction in Hunslet Carr several years ago it revealed an old hand painted sign promoting Bile Beans.

This type of advertising sign was the forerunner of the modern advertisements papered on wooden boards and were common place in the past on the old terraced street ends throughout the city and is part of the heritage of Hunslet. The sign was fading away and in desperate need of restoration. It featured on the BBC regional TV program ‘Inside Out’ and was discussed on Radio Leeds.

The sign is one of only two remaining wall painted advertisements for Bile Beans. One had already been restored in York so Hunslet Carr Residents Association asked Councillors Iqbal, Nash and Wray (Hunslet & Riversiude) for help in making it possible for the Hunslet sign to be restored as it represented a Leeds based company.

Charles Fulford and Ernest Gilbert first sold Bile Beans in Australia in late 1897 and established the Bile Bean Manufacturing Company in Leeds in 1899. It was claimed that the formula for Bile Beans was a plant source known only to Aboriginal Australians. It’s actual ingredients included cascara, rhubarb, liquorice, and menthol. Trading under the name CE Fulford Ltd other common products were produced including Zam–Buk ointment, Pep Pastilles and Vitapoint hair conditioner.

After setting up in England in 1899 the company spent about £60,000 a year in advertising its products. Placards, pamphlets and newspaper promotions took the form of testimonials claiming “life changing cures”. When Radio Luxembourg started longwave commercial radio broadcasts in English in 1933 its first advertisers were Fulfords Bile Beans and Zam–Buk ointment.

Bile Beans remained popular throughout the 1930s and 40s and continued to be sold until the 1980s. Examples of the tins and packaging can be seen in Leeds museum. The business was so successful Frank Fulford was able to purchase Headingley Castle in Leeds in 1909 and the family donated artworks to Temple Newsam.

After receiving funding from Leeds Inner South Community Committee the sign has now been restored and whilst preparing the wall for the renovation the restoring artist found an even older advertisement underneath. The remains can just be seen above and below the renovated sign.

Hunslet Carr Residents Association would like to thank the property owner for allowing the sign to be restored, the Councillors for supporting the project, Leeds Inner South Community Committee for funding and the Artist for his restoration work.